Goodbye to Carl and Carlos 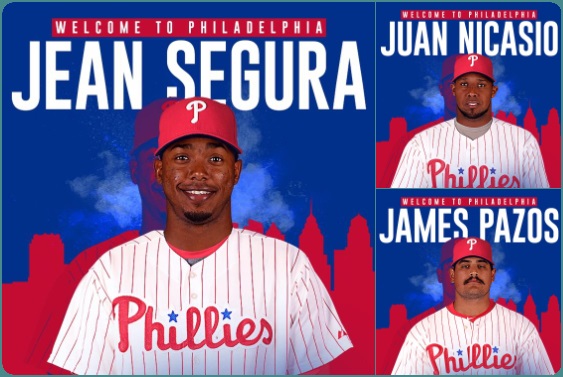 Earlier today, the Phillies finalized a trade that sent J.P. Crawford and Carlos Santana to the Seattle Mariners in exchange for All-Star shortstop Jean Segura and relief pitchers Juan Nicasio and James Pazos.

I always liked Crawford, but his success above AA has been very limited.  He's still a lottery ticket, and a questionable one.  Frankly, even if everything goes perfect for Crawford from this point forward, he might hopefully become what Jean Segura already is.  The fact that Segura is signed through the end of the 2022 season makes this a win even if he was the only thing we got back.

Santana is another player I really liked, and after seeing the Phillies move him to 3B at the end of the 2018 season, I had high hopes of seeing him stick there with Hoskins moved back to 1B where he belongs.  Hoskins was the worst defensive player in all of baseball in LF because he simply doesn't belong there.  He's a first baseman.  He was displaced by Tommy Joseph when he first came up, and he was displaced by the free agent signing of Santana in 2018.  It's a damn shame that there's no DH in the National League.  It's crippled the Phillies before.  Imagine a Phillies team from 2005 - 2007 with Thome as the DH.  A lineup of Rollins, Utley, Howard, Thome and Burrell might have turned the 2007 NL East crown to a World Championship.

The addition of two quality relief pitchers make trade even better.  Juan Nicasio returns to the Phillies after spending five days with the Phillies in 2017.  James Pazos is a much needed quality lefty out of the bullpen  So, in one trade, the Phillies added two key bullpen pieces, installed a massive upgrade at shortstop over the next four seasons, eliminated a huge defensive hole in LF with Hoskins returning to 1B (regardless of who plays the position), and making this a better team in both the short and long term.