There's A Killer On The Court 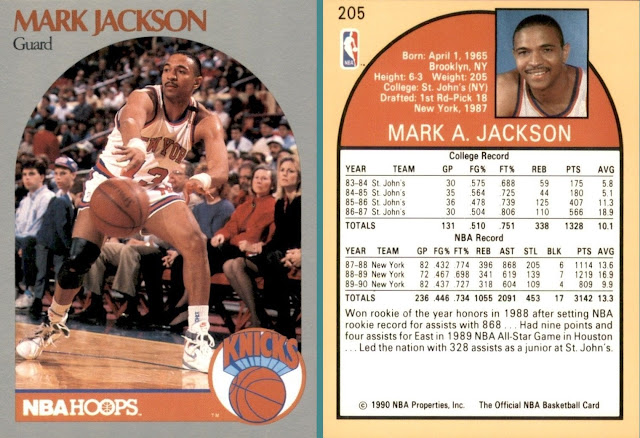 Mark Jackson
Guard - New York Knicks
1990-91 NBA Hoops - card #205
Sometimes the strangest things are found hiding in plain sight.  Take this basketball card, for example.  On the surface, it's not remarkable.  Mark Jackson was a fine player who had a long and successful career, but this card from the 1990-91 Hoops set was nothing special.  They mass produced the hell out of trading cards in the 80's and 90's, and this isn't a rare card or Jackson's rookie season or anything out of the ordinary.  That all changed late last year when crime novelist Stephen Zerance spotted two notorious murderers among the fans pictured on the card. 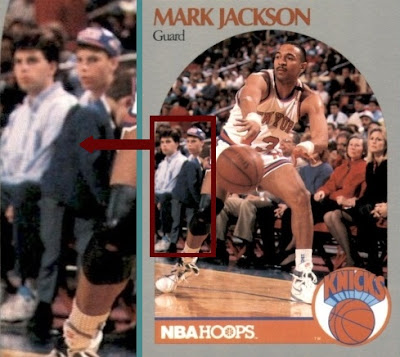 In an investigation that would make Jessica Fletcher proud, Mr. Zerance made this discovery while following up on the Lyle and Erik Menendez murder trial.  The Menendez Brothers killed their wealthy parents on August 20th, 1989.  They weren't suspects at first, but they were overhead talking to each other about the murder and were arrested in March 1990.  The crime and subsequent trial became a media circus, in part due to the fact that they burned through $700,000 of their parents life insurance policy in the 7 months between the murder and their arrest.  The outlandish ways in which they spent the money have been documented and discussed in the trial and in numerous documentaries and articles.  Among the items on the list were courtside tickets to a Knicks game at Madison Square Garden.

Taking a closer look at the card, you can see that there's a black ribbon on the left shoulder of Jackson's jersey.  That ribbon was a tribute in honor of Knicks announcer John Condon who died of cancer on October 13th, 1989, and it was worn by the team during the 1989-90 season.  The Knicks played 28 home games during the spending spree before Lyle and Erik Menendez were arrested.  Since Mr. Zerance's findings, it has been confirmed by multiple news sources, including the Washington Post, that the the notorious brothers are, in fact, the two men in the background of the card.  The only missing piece to the puzzle is knowing the exact game that the photograph used in this card was taken.

Prior to this discovery going viral, this basketball card sold for about five cents.  In the last few months, it has been selling on eBay for as much as $30 dollars per card.  Kids, the lesson here is to never throw out your common cards.  You never know when they might unexpectedly become valuable.  Oh yeah, and don't kill your parents.