The Mets picked up four superstars in the winter before the 1992 season.  They signed right fielder Bobby Bonilla to a five year contract that made him the highest paid player in the game at the time.  The also signed future Hall of Famer Eddie Murray to play first base, and six time All-Star Willie Randolph in what would be the final season of his playing career.  Unfortunately, none of these three players appeared in the game; however the fourth and arguably best off-season acquisition was the ace who started the game.  On December 11th, 1991, the Mets traded Gregg Jefferies, Kevin McReynolds and Keith Miller to the Kansas City Royals for two time Cy Young Award winner and former World Series MVP Bret Saberhagen.

The Braves were coming off of a historic "worst to first" season in which they narrowly lost the 1991 World Series to the Minnesota Twins.  I was eleven years old and '91 was the first World Series that I watched every game of, so I was excited to see the players that I watched in the Fall Classic just a few months earlier.  Among the Braves lineup for this game were the 1991 NL MVP Terry Pendleton, and an outfield made up of 1990 Rookie Of The Year David Justice, two-sport phenom "Neon" Deion Sanders, and back-to-back 30/30 man Ron Gant.  Gant would go on to play for the Phillies from 1999 - 2000.  Lonnie Smith was another Braves outfielder with ties to the Phillies who would appear in this game.  He came into the game as a pinch hitter, and in so doing, he became the only player from the 1980 World Series Champion Phillies that I ever got to see play in a game that I attended.

Pete Smith was the starting pitcher for the Braves.  He was originally drafted by the Phillies in 1984.  Prior to the 1986 season, The Phillies traded Smith and catcher Ozzie Virgil to the Braves for Steve Bedrosian and Milt Thompson - a trade that the Fightin's definitely got the better end of.

The Mets beat up on Pete Smith and reliever Mike Stanton in the first six innings of the game en route to a 9 - 3 victory.  Kevin Elster went 3-5 and narrowly missed a home run.  Vince Coleman hit a double and scored two runs.  Howard Johnson went 1-3 with two RBI.  Todd Hundley went 2-4 with an RBI.  Hell, even Saberhagen managed to get a hit and an RBI.  Kent Mercker came in in relief in the 7th and he and closer Alejandro Pena combined to hold the Mets to one hit and no runs for the final three innings of the game.  Meanwhile, Saberhagen did a good job keeping Atlanta in check. The Braves managed to score three runs: Deion Sanders hit an RBI triple, Mark Lemke went 2-4 with an RBI, and a very young Vinny Castilla got a single and an RBI in his only at bat after replacing Jeff Blauser at shortstop late in the game.

An interesting side note to this game is that it included three pitchers who were involved in a no-hitter in the 1991 season.  As the ace of the Royals rotation, Bret Saberhagen no-hit the White Sox on August 26th.  Just over two weeks later, Kent Mercker and Alejandro Pena (along with Mark Wohlers) pitched a combined no-hitter against the Padres.

One of the main things I'll always remember about this game was the rain.  The game was being televised on TBS.  We sat in the left field bleachers with a group of fans who all worked for the same company and all had matching umbrellas with their company logo that they were hoping to get on tv.  When it started raining, these folks gave Dad and I an umbrella to stay dry.  It wasn't a torrential downpour and there were no delays, but it rained steadily throughout most of the game.  The folks with the matching umbrellas left at around the 5th inning, and the guy who gave us the umbrella must have felt bad for us because he let us keep it.  Actually, everybody in our row left early because of the rain, except for Dad and I who sat through the whole game like a couple of yutzes.  Years later, Dad said that we would have left early too, but he didn't want to go because it was my first Major League game.  He's a pretty awesome Dad. 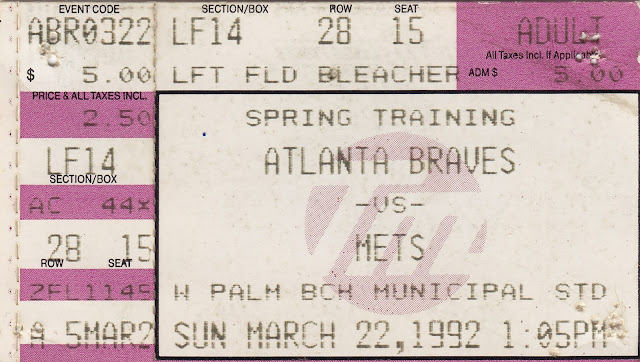 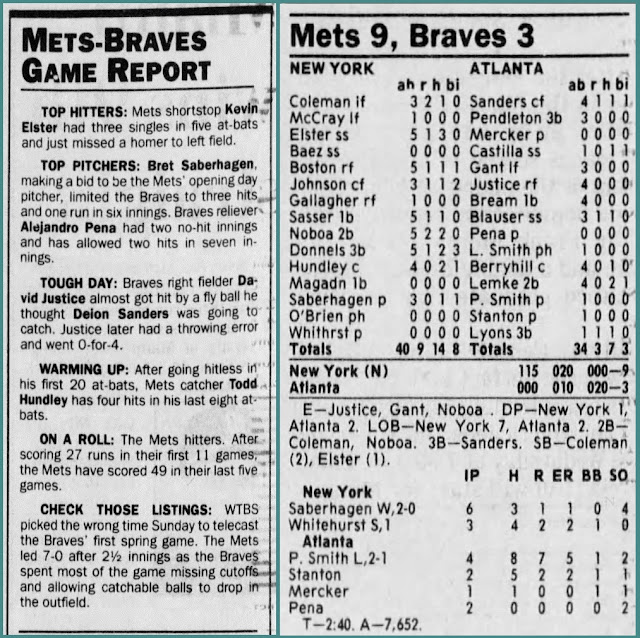