The Warehouse In The Woods

Dave Matthews Band
Summer 2019 Tour
Bethel Woods Center For The Arts - Bethel, NY
When I was in my early teens, my favorite store to visit was Gallery Of Sound.  Not only did they have tapes and CDs at decent prices, but they also had imports that no other store had, and they would tear the cover off of the previous month's Guitar World magazines that had gone unsold and put them at the front of the store to take for free.  Next to this pile of free rock magazines were a line of cardboard boxes in front of signs, with a pencil and little scraps of paper nearby.  If you filled one out with your name and phone number and put it in the box, you were entered for a chance to win a prize.  I never won the grand prize, but I did end up with some pretty cool things, like an autographed Deep Purple CD box set.  This was also how I was introduced to the music of what would become one of my favorite bands after I won a copy of Under The Table And Dreaming along with a t-shirt and a hat.

These tickets were an early birthday present, and it was a very good show.  I didn't get to see much of the stage due to the two massively tall hippies dry humping each other directly in my field of vision, but Bethel Woods had recently installed screens on the lawn, so I still got to see the show.  The acoustics of the venue are fantastic, and Dave sounded as amazing as usual. 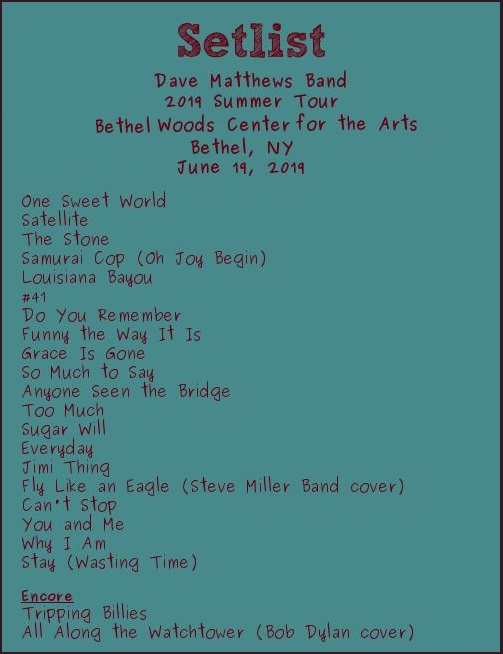