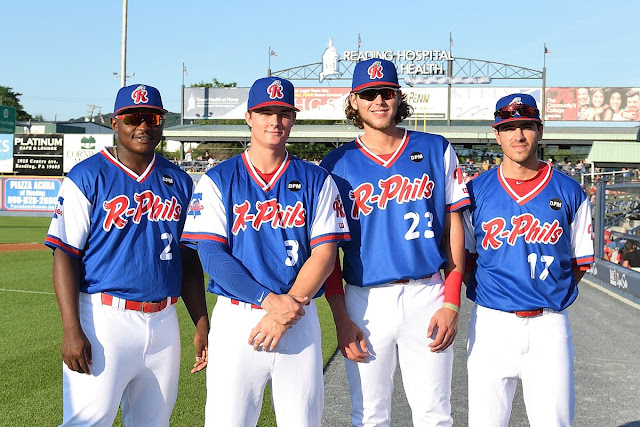 For a brief time last week, the Double A team had four first round draft picks on the team at the same time:

Since then, Haseley's rehab assignment has taken him to Triple A.  Also, Moniak was removed from the 6th inning of the game last night after tweaking his hamstring, so he sat out of tonight's game to heal up.  However, Alec Bohm and Cornelius Randolph both played and had a great game.  Randolph went 2-4 and Bohm went 2-5 with a stand-up triple to right center.  First baseman Darick Hall also had a great game, going 2-3 with a home run and two walks.  It looked like the Phils were cruising to a victory, but the Fisher Cats tied the score at 5-5 in the 7th and pulled ahead in the 9th when Josh Palacios hit a triple to score Nash Knight.  He then scored on a Christian Williams double. 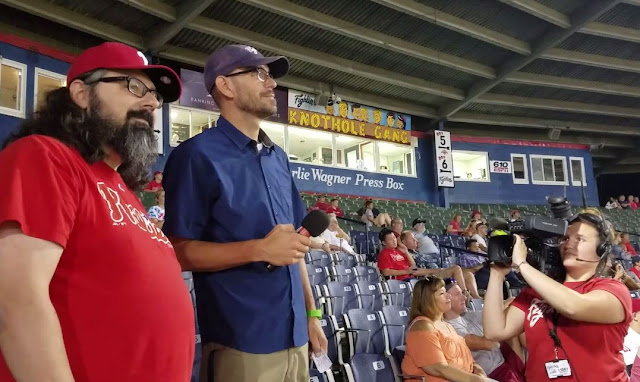 It was a bummer that the Fightin's lost, but the game was a lot of fun.  Bohm is the real deal.  The talk is that he may be the starting 3B in Philadelphia next season.  The highlight of the night for me happened in the 8th inning when they put me on the big screen for one of the trivia games.  The way it worked is that I represented the guys in attendance, and the trivia question was "what percentage of the Fightin' Phils players have shaved their legs at some point in their life".  I had to give a number, and then the woman who was selected to represent all of the gals in attendance had to guess if the correct answer was higher or lower.  I guessed 25%, and the female contestant guessed that the correct answer would be lower.  Mickey Moniak then came on the big screen to say that the right answer was 33%, so I won four tickets to a game later this month, which was a pretty awesome and unexpected birthday present.  The dude who asked me the trivia question mentioned that it was my birthday, so as we were leaving the stadium, a bunch of people who recognized me from the big screen wished me a happy birthday.  I'm not always super comfortable with attention, but honestly, it made my night.