The Philadelphia Phillies have played baseball for 136 years.  The team was founded in 1883, less than 20 years after the Civil War.  In all of that time, there have been only nine players who have played for at least seven seasons to spend their entire Major League career with the Phillies.  Two iconic sluggers who played in my lifetime are among the nine: Mike Schmidt and Ryan Howard.  At this afternoon's game, the franchise and the fans honored the latter with Ryan Howard Retirement Day.

Prior to the game, the Phillies invited a number of special guests on the field to honor Ryan Howard, including Charlie Manuel, Milt Thompson, Ed Wade and Roly de Armas (Howard's manager when he was in the minor leagues with the Clearwater Phillies, and the bullpen coach of the 2008 World Champion Phillies).  The team also showed a pre-recorded congratulatory message on the big screen from Ken Griffey Jr. and Mike Trout.  Ryan Howard was introduced on the field and he gave a nice speech to wrap up his professional career as one of the most iconic and beloved players in franchise history. 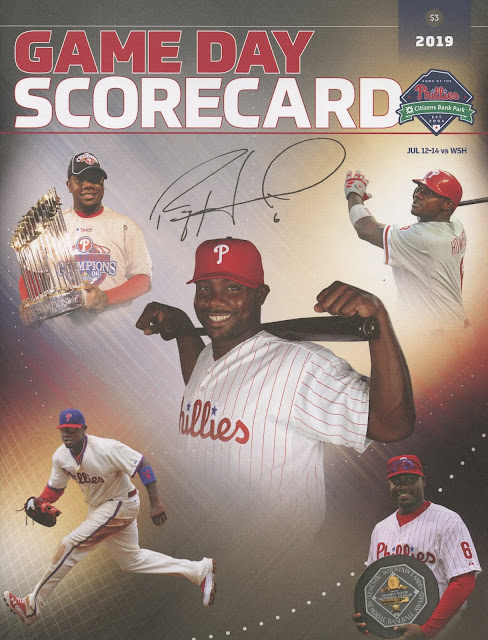 On top of everything else, it was a great game.  The Phillies were coming off of two losses to the Nationals and trying to avoid the sweep.  With the game tied 1-1 in the bottom of the 5th, Maikel Franco drew a walk and Adam Haseley singled (the second hit of his MLB career) to put runners on 1st and 2nd with no outs.  Brad Miller struck out and Scott Kingery popped out, but Jean Segura hit a line drive to right field to give the Phillies a 2-1 lead.  The ball was misplayed in the outfield and Haseley should have scored, but he held up at third base.  Thankfully, the Phillies tacked on another run in the 6th on J.T. Realmuto's 11th home run of the season.

The Phillies brought in J.D. Hammer in the top of the 7th.  He was rushed to the major leagues because of the many injuries in our bullpen.  He's been reasonably effective so far this season, all things considered, but this was not one of his better outings.  He walked Kurt Suzuki and Victor Robles which brought former Phillie Howie Kendrick to the plate in a pinch hitting appearance.  Kendrick hit an RBI single, which was followed by a Trea Turner RBI single which tied the game at 3 and chased Hammer from the game.

Ranger Suarez was brought in to finish the 7th, and he, Adam Morgan and Hector Neris combined to keep the Nationals from scoring again.  Finally, with one out in the bottom of the 9th, Maikel Franco hit a walk-off home run off of Matt Grace to give the Phillies the 4-3 win.  It was Franco's 100th career home run and the second walk-off homer of his career.  Franco is one of the few remaining members of the team to have played with Ryan Howard, so it was a fitting end to a game that began with a tribute to The Big Piece.