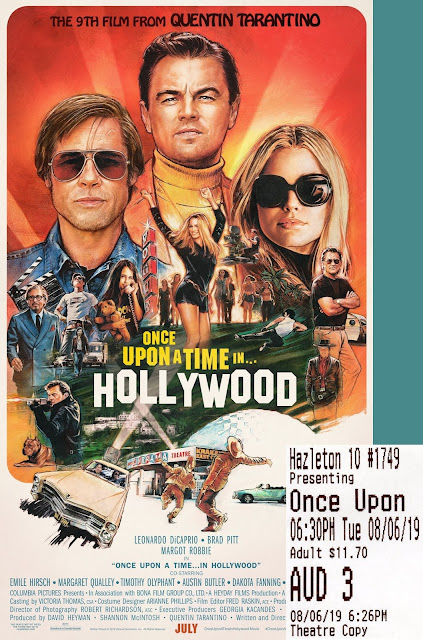 Once Upon A Time In Hollywood (2019)
Regal Cinema - Hazleton, PA
Quentin Tarantino has been my favorite director since I first saw Pulp Fiction when I was 14 years old, but when I heard he was writing a movie about the Manson Family murders, I wasn't sure what to think.  I hate when I see pop culture glorify Charlie Manson.  He was a douchebag, his "family" are douchebags, and the jackasses who try to be edgy by wearing Manson shirts are douchebags.  I love blood and guts horror flicks as much as the next weirdo, but cheering on Michael Myers in a fictitious world and glorifying a piece of trash who orchestrated the murder of innocent people are two very different things, and it's not cool that so many people are comfortable crossing that line.  I'm happy to say that after seeing this movie, I feel like Mr. Tarantino might agree with me.

Once Upon A Time In Hollywood comes from the Inglourious Basterds side of the director's brain, and it's absolutely brilliant.  The commercial jingles and vintage product and pop culture imagery are about as subtle as a flamethrower, but the over-the-top immersion in 1969 Hollywood is perfect.  Brad Pitt and Leonardo DiCaprio are as fantastic as they always are, and the final scene of the movie is the most satisfying and enjoyable thing I've seen in any film since Donny Donowitz introduced Werner Rachtman to baseball.