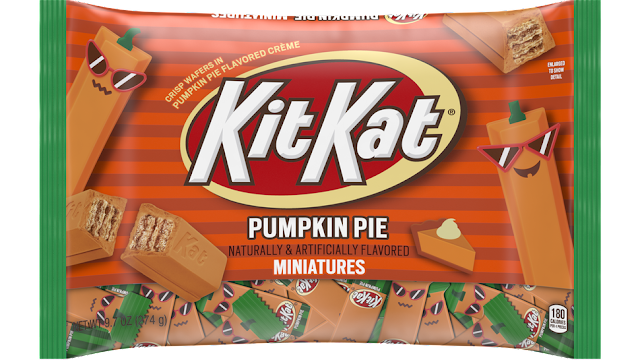 Pumpkin Pie Kit Kat
Hershey (2019)
After I graduated from college, I took a job with Nestlé customer service on the confections, baking and ice cream team.  It was intended to be a temporary gig to pay the bills while I looked for something in counseling or social services, but I had a knack for it and earned a few promotions - first to social media specialist, then to quality assurance coach, and finally as the trainer of a team of nearly 100 agents in several states across the country.  One of the incentives that I put together that the team seemed to enjoy were the Japanese Kit Kat baskets that the team could win.

Most Americans don't realize this, but Kit Kat is a Nestlé brand in every other country outside of the United States, and they're a massive success in Japan.  They're such a big hit in the Far East that they have special stores called Chocolatory's which are dedicated to selling nothing but Kit Kat products and their hundreds (yes, hundreds) of unusual and delicious flavors.  Until recently, the Kit Kat products sold in the USA were just plain old chocolate, but I was happy to see that Hershey is now following Nestlé Japan's lead by creating fun, seasonal flavors of the classic confection.  Nothing could have prepared me for how good they are.

I don't know how they did it, but these things taste EXACTLY like a pumpkin pie.  You get the flavor of pumpkin, a graham crust and exactly the right amount of spice that you'd get in a pie.  They're much better than any of the other seasonal pumpkin product I've ever had.  They're much better than any of the flavors of Japanese Kit Kat bars I've ever had the chance to try.  In fact, I wouldn't hesitate to say that they're the best candy of any kind that I've ever tasted.  These are absolutely perfect.

Part of me wants to buy cases of these and gorge myself silly, but I'm going to limit myself to eating one mini bar per day.  I've got a long family history of diabetes and I've been very lucky so far, but I've had a few experiences over the past few months that have made it clear that I'm pushing my luck with my eating habits.  I might give up snack food altogether in the new year, at least for a little while.  If I do manage to live a life without candy, it's hard to go out on a more tasty treat than these.