The Snake And The Caveman 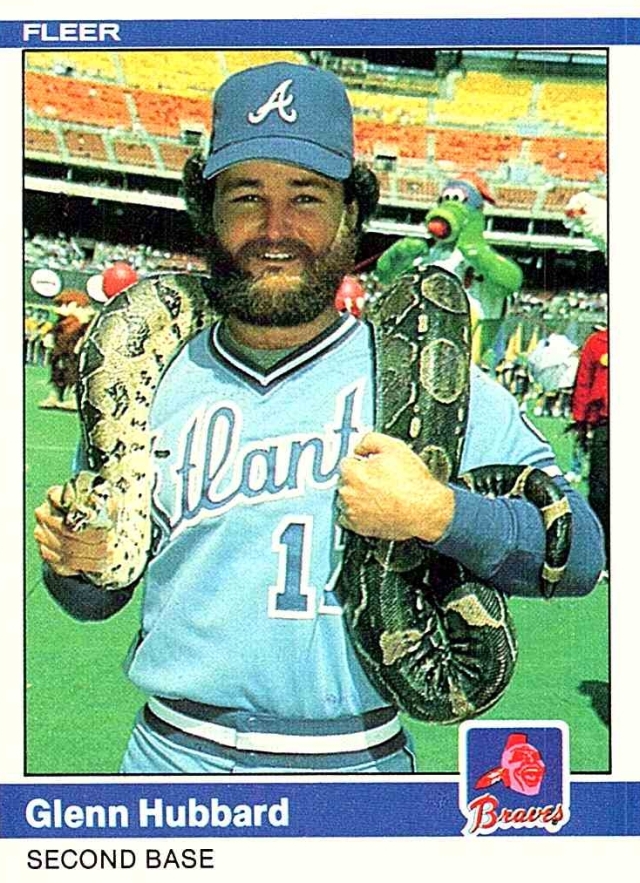 Glenn Hubbard
1984 Fleer - Card #182
Former infielder Glenn Hubbard turned 62 years old this month.  He played for the Atlanta Braves and Oakland Athletics from 1978 to 1989, and he returned to the game following his retirement in 1999 to coach.  He never played for the Phillies, but he does have one of my favorite Phillies-related baseball cards of the 80's in the 1984 Fleer set.

There's so much happening on this card.  First of all, the 1983 All-Star second baseman has an eight foot boa constrictor draped around his neck.  I'd like to think that a young Jake Roberts saw this card and stole the gimmick when he debuted in the WWF two years later.  However, the snake is just the start of the story. 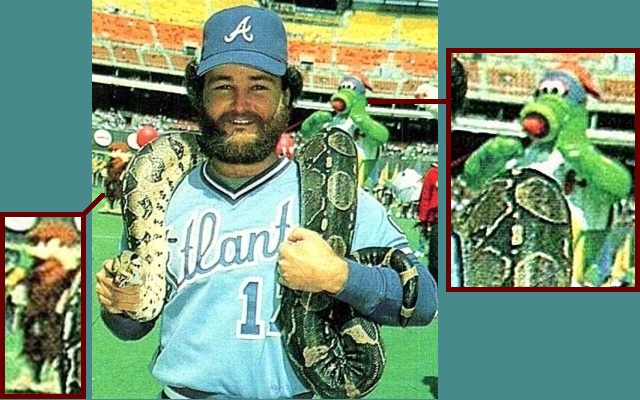 Eagle-eyed card collectors may have noticed the Phillie Phanatic on the right hand side in the background.  He appears to be peering over the shoulder of the Braves infielder.  The less obvious personality on the field is Barney Rubble.  The cartoon icon can be seen staring off into space in the background to the left of the snake draped around Hubbard's shoulder.  So, what the hell was going on at the ballpark?

In his Cardboard Corner series, Baseball Hall Of Fame columnist Bruce Markusen investigated the history of this card.  He found an interview that Hubbard once did with the Carolina Sports Network which revealed some information about this peculiar card.  The photo was taken at Veterans Stadium in 1983 prior to a game between the Phillies and Braves.  Barney Rubble and the snake were present as part of a pregame celebration for the fifth birthday of the Phillie Phanatic.  Hubbard held the snake and asked a photographer to take his picture without knowing that the man was a freelance photographer who worked for Fleer.  The rest is baseball card history.

The revelation that the photo was taken at the Phanatic's fifth birthday helped me to discover the game where the infamous '84 Fleer card was born: April 17th, 1983.  Hubbard went 0-3 with a walk that afternoon, but the Braves beat the Phillies by a score of 3 - 1.  Barney's neighbor Fred Flintstone, along with Yogi Bear, Huckleberry Hound and Scooby Doo were in attendance that day, and kids 14 and under who were at the ballpark that night went home with this Phillie Phanatic growth chart.