AEW Dynamite: Episode 3
The Liacouras Center - Philadelphia, PA
I've been a fan of professional wrestling since before I was in Kindergarten.  I mainly watched WWF when I was in elementary and middle school, and I got into WCW and ECW in the mid 90's.  When I first got on the internet in the late 90's, I joined a couple of tape trading message boards where I got my first exposure to lucha libre and puroresu.  I was burned out a little bit in the early 2000's after WCW and ECW went out of business and the WWF/E product started to be disappointing with poor writing and continuity.  I still kept up with it, but not like I did when I was a kid.  Then, in 2005, I saw that Kenta Kobashi was scheduled to appear in a Ring of Honor show in Philadelphia.  I bought tickets and had an incredible time.  I ended up going to just about every ROH show in Pennsylvania, New York and New Jersey for the next few years, and as I became more familiar with their wrestlers, I was exposed to other promotions that they worked, like CZW and Chikara.

After college, I started to work for Nestle and I didn't have as much time to keep up with pro wrestling as I once did.  I subscribed to the WWE 24/7 premium channel, and then the WWE Network when they moved to a streaming service, but I found that when I had time to watch, I would gravitate toward the older shows that I watched when I was a kid.  As for the new material, the wrestling matches themselves were usually very good, but the storylines, the writing and the commentary was so horrible that it became hard to watch.  These days, companies like ROH and TNA are a shell of their former selves, and the only programming I truly enjoyed was NXT.  I began to wonder if I had just outgrown wrestling.  That all changed just over a year ago when  Cody Rhodes and The Young Bucks self-funded a show called All In.  The show was phenomenal, and it developed into a new promotion that has made professional wrestling fun again - All Elite Wrestling.

Yesterday was the third episode of their new weekly TNT series, AEW Dynamite.  I almost didn't go because I wake up at around 4 am for work, but I couldn't pass up the opportunity to see the first AEW show in Philadelphia, and to support this incredible company. 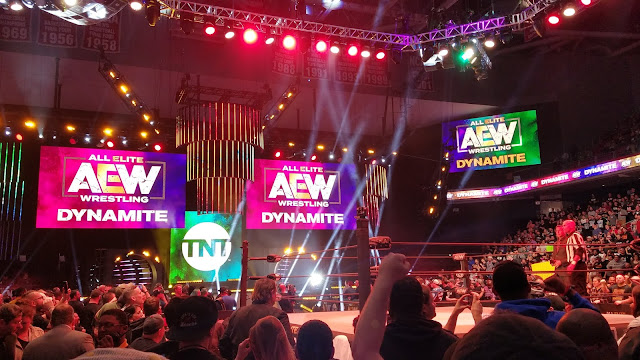 Here are the results of the show:
The show was incredible from top to bottom.  I was a little disappointed that "The Fallen Angel" Christopher Daniels didn't wrestle.  He wrestled on the first ROH show I ever went to in 2005.  I met him after the show and he was a super nice dude, and I've been a big fan of his ever since.  He was scheduled to wrestle as Kazarian's tag team partner in the opening match of the main show, but he was attacked by the Lucha Brothers and had to be replaced by Scorpio Sky.  While I would have liked to see him wrestle, I'm very interested in seeing where the story goes from here. 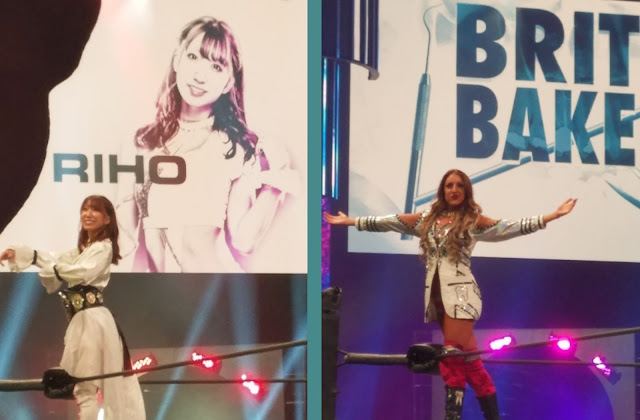 Riho is really getting over with the crowd in a big way as the first ever AEW Women's Champion.  She's developed a pretty awesome character where she's fighting as the underdog despite being the champion, and she outsmarts her opponents to get the victory without it feeling like a cheap win. 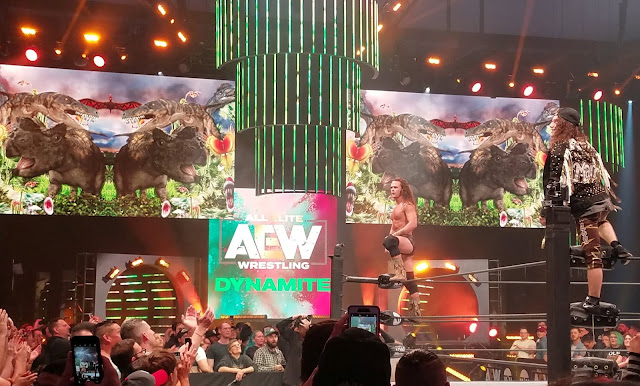 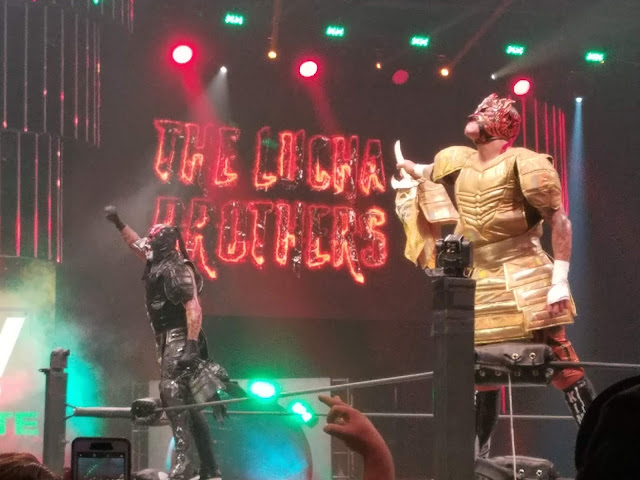 I wasn't sure what was going on with the Jurassic Express match at first.  It was supposed to be Jungle Boy and Luchasaurus, but Luchasaurus didn't even come out to the ring to accompany the team.  I was a little bummed at first, but The Lucha Brothers, Jungle Boy and Marko Stunt did an incredible job telling a story in the ring, with Pentagon and Fenix not taking their smaller opponents seriously, which led to Jurassic Express capitalizing on their opponents over-confidence throughout the match.  Eventually, The Lucha Brothers started to take the match more seriously and got the win.

After the show, Marko Stunt explained what happened that led him to replace Luchasaurus. 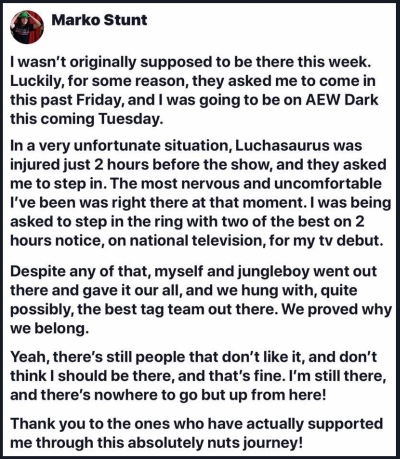 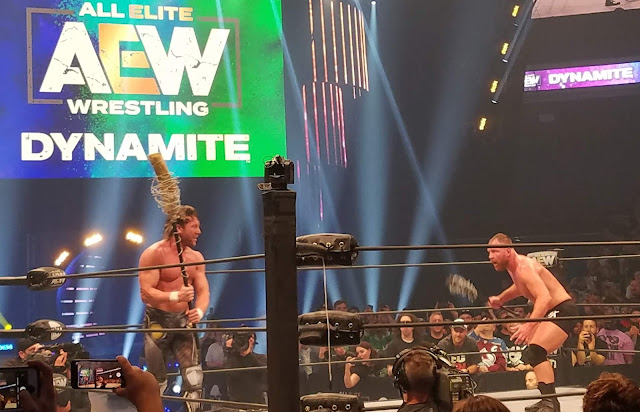 The Omega/Page vs Moxley/Pac match took place on Kenny Omega's 36th birthday, which led the fans to chant "happy birthday" after his entrance.  Jon Moxley, who was a main event star of Philadelphia-based indy promotion CZW prior to his run in the WWE as Dean Ambrose, got a loud "CZW" and "welcome home" chant.

The match was absolutely wild and culminated in a standoff between Kenny Omega, wielding a barbed wire wrapped broom against Jon Moxley, who carried a barbed wire baseball bat.  Pac confronted Moxley for using a weapon, which inspired Moxley to attack and abandon his tag team partner.  This set up a match between Moxley and Pac for next week. 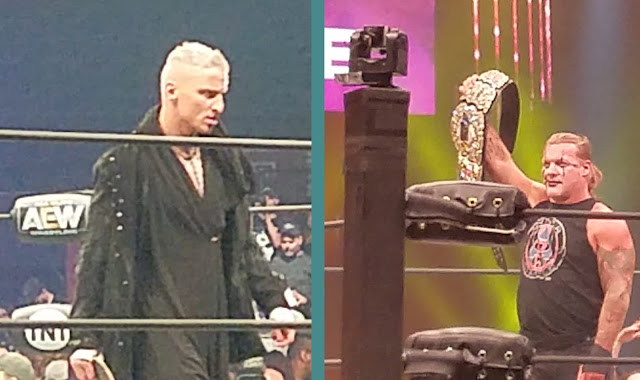 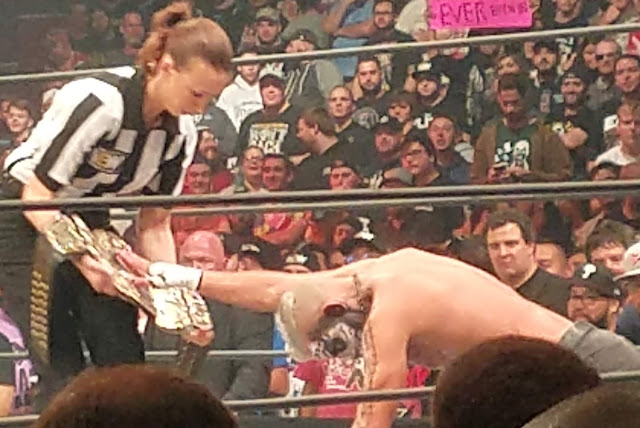 Chris Jericho defended his AEW World Championship for the very first time at this show, and he did it in a Philadelphia Street Fight against one of the best young wrestlers in the world today.  Darby Allin completely won me over in his time limit draw against Cody Rhodes at Fyter Fest earlier this year.  He has an intriguing character and an in-ring style that commands your attention.

This match delivered everything I was hoping for and more.  Toward the end, Jericho duct taped Allin's wrists behind his back.  Allin fought back with a ridiculously cool sequence of offensive maneuvers without the use of his arms, but his comeback was cut short by Jake Hager shoving him off of the top rope, which allowed Jericho to lock in the Walls Of Jericho for a submission victory. 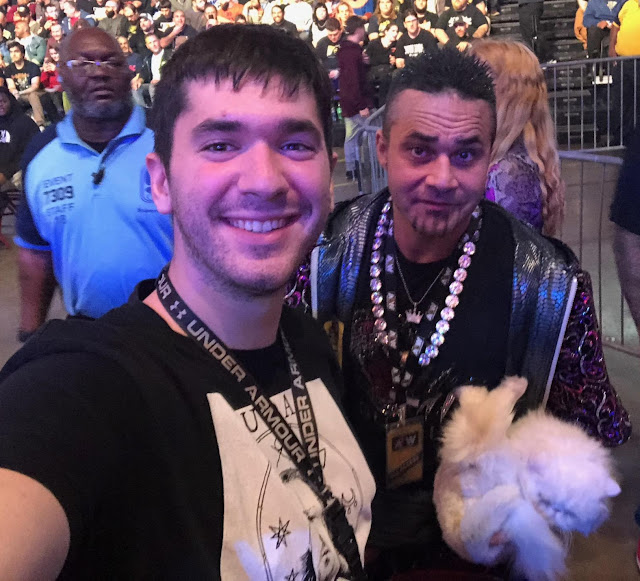 One of the most unexpected things of the night for me was when Teddy Hart wandered around the crowd with his white persian cat, Mr. Money.  I didn't get my phone out in time to take a photo, but the dude who sat next to me asked and got this selfie with the feline carrying phenom.  His name is Sam, and you should check out more of his pics @ProWrestlingEverything on Instagram. 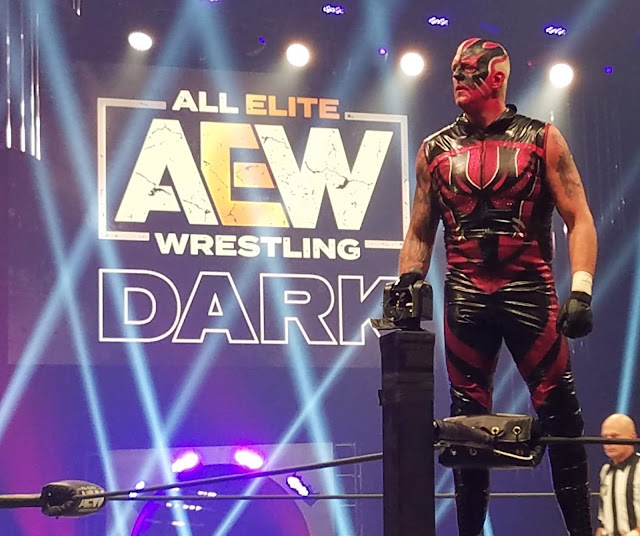 There were three AEW Dark matches on the card - one at the beginning of the show and two at the end.  It was awesome surprise to see Joey Janela, Brandon Cutler and Nyla Rose.  To be very honest, I'm not at all a fan of Leva Bates or the gimmick that she and Peter Avalon are using in AEW, so I would have preferred to see Nyla Rose wrestle literally anyone else on the roster, but they can't all be winners.  However, the last match of the night was a ridiculously fun eight man tag team match had me cheering like I was 7 years old all over again.  MJF came out with The Elite and popped the crowd when he faked out the crowd, pretending as if he was going to do a tope, and then telling the fans to stick it.  His character of being the asshole heel that just happens to be friends with the beloved good guys is one of the most entertaining things I've seen in professional wrestling in a long time, and he plays it perfectly.

After the match, Cody Rhodes closed out the night by addressing the crowd and inviting a kid into the ring who had an incredible cosplay of Orange Cassidy.  He had his looks and mannerisms down perfectly!  They showed him on the screen at the beginning of the show and the crowd popped, but that was nothing compared to the pop that he got when he pinned Cody Rhodes.  Check it out:


UPDATE: In the days after the show, the "Clementine Cassidy" kid has gone viral.  The story has been reported by ABC News and across many wrestling news and mainstream media outlets.  His name is Nate Richardson, and he's from Toms River, NJ.  His parents got him tickets to this show as a birthday present.  That has to be one of the most awesome 11th birthdays that anyone has ever had!  Way to go, Nate!