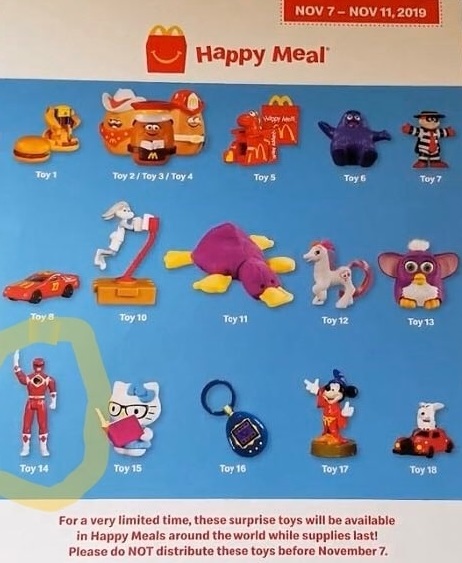 Happy Meal 40th Anniversary Toys
McDonalds (2019)
Starting today, McDonald's will be re-releasing some of their vintage toys to celebrate the 40th anniversary of the Happy Meal.  The promotion will last five days, and includes toys from Hello Kitty, Space Jam, My Little Pony, Furby, Tamagotchi, Beanie Babies and Hot Wheels.

My favorite toy in this collection by far is the Changables hamburger.  The Changables were a series of Happy Meal toys that first came out in 1987.  They looked like food, but you could transform them into something else.  Series 1 (1987) and Series 2 (1989) Changables turned into robots while Series 3 (1990) turned into dinosaurs.  I was in elementary school at the time, and I can tell you first hand that these things became a hot collectible at recess.  My friends and I would trade our duplicates with each other to try to collect the whole set.

It's a little funny that the Happy Meal was first released in 1979, but the oldest toy from this 40th Anniversary collection is from 1988.  It makes me wonder if they have a warehouse of old toys somewhere, and these aren't new toys, but ones that they produced too many of that have been in storage all this time.