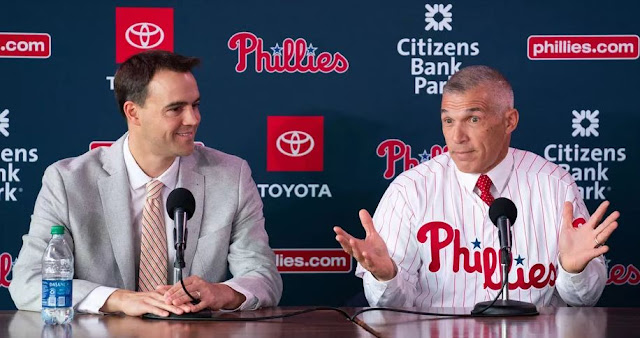 The Phillies made their most important acquisition for the 2020 season in late October when they signed Joe Girardi to replace Gabe Kapler to manage the team.  However, they have a number of other needs to address if they hope to compete for their first playoff appearance since 2011.

The non-tender deadline is at 9:00 pm tonight, so there's a strong likelihood that a number of moves will be made over the next few weeks.  I had a few thoughts on what those moves should be when the season ended, but now that a couple of months have passed, I've had some time to think it over a bit more.  It would be easy to say that the Phillies should sign Gerrit Cole, Steven Strasburg and Anthony Rendon, but that's not going to happen.  It's possible that they'd be willing to go over the luxury tax threshold this winter with $33 million coming off the books in 2021 (Jake Arrieta and David Robertson), but I don't see them committing to the years and dollars that it would take to get the three biggest fish.  With that being said, here are the moves that I'd like to see the Phillies make this winter. 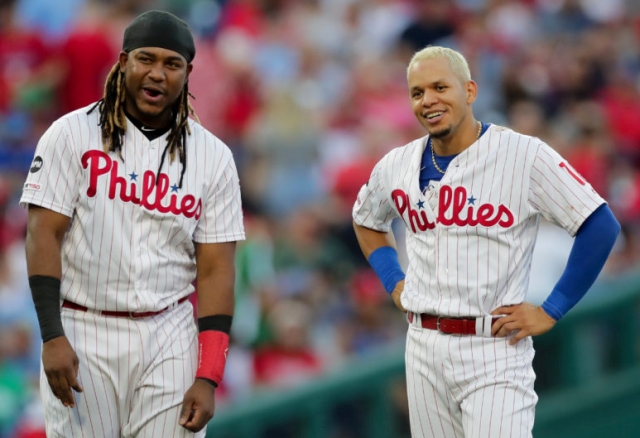 Non-Tender: I've been a fan of Maikel Franco and Cesar Hernandez for years, but it appears that the time may have come to move on.  Franco is projected to make over $6 million in arbitration with Hernandez projected to earn almost $12 million.  While I think that both have productive years ahead of them, the team has pitching needs and the almost $20 million that it would cost to retain both in arbitration would be better spent elsewhere.  I'm tempted to say that I'd like to see the Phillies work out more team-friendly contract with each of them, but Franco's bat and Hernandez's defense have been on the decline, so I think it's the right time to move on. 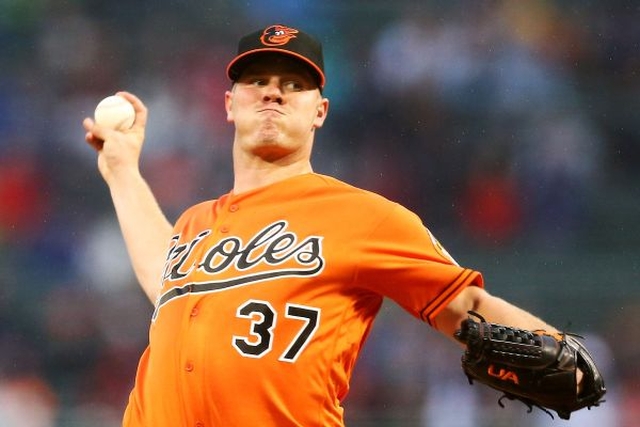 Dylan Bundy: The former first round draft pick hasn't lived up to expectations in Baltimore, but he's made significant improvements in 2019.  He's projected to make $6 million in arbitration this season, and he's under team control through the end of 2021.  There's reason to hope that at age 27, he may begin to put it together and be a valuable piece at the back of the rotation.  I'd like to see if the Orioles would be willing to take Odúbel Herrera.  He's a year older than Bundy, he'll be making similar money over the next two seasons, and he could most certainly benefit from a change of scenery to earn his way back to a starting job in the major leagues. 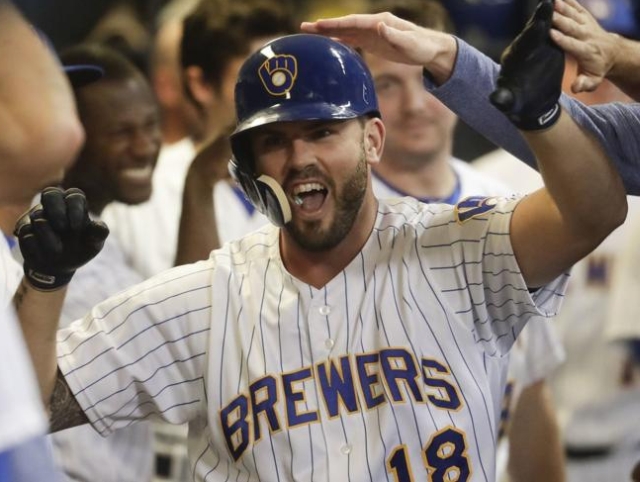 Mike Moustakas: I once thought that he wasn't a significant enough upgrade over Maikel Franco to make it worth signing Moose to the Phillies, but his 35 home runs in 2019 have changed my mind.  Moustakas is a productive bat in any lineup, and his ability to play second and third base would make him an extremely valuable addition to the Phillies over the next 2 - 3 seasons. 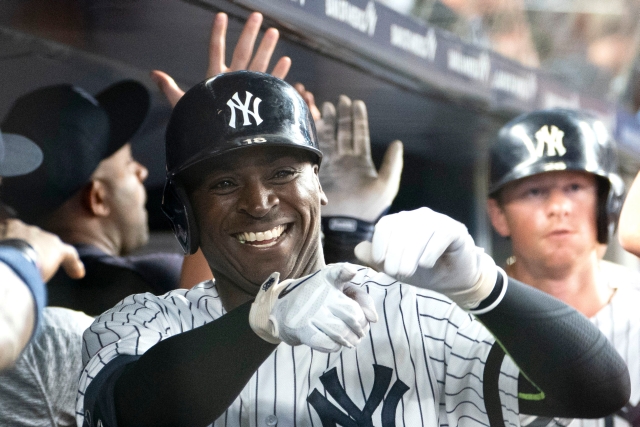 Didi Gregorius: The Phillies have been rumored to have interest in the Yankees shortstop for a few weeks now, and I couldn't be happier.  He spent most of 2019 working his way back from injury, but when he's at the top of his game, he's got good range at shortstop and can hit for average with 20+ HR power.  He's been clutch in the post season, and he's known to be a positive presence in the clubhouse.  Also, like Moustakas, Gregorius doesn't have a qualifying offer attached to him, so it won't cost a draft pick to sign him.  There's always a chance that he isn't able to return to his pre-2019 production, but I'd like to see the Phillies take a chance with a two or three year deal. 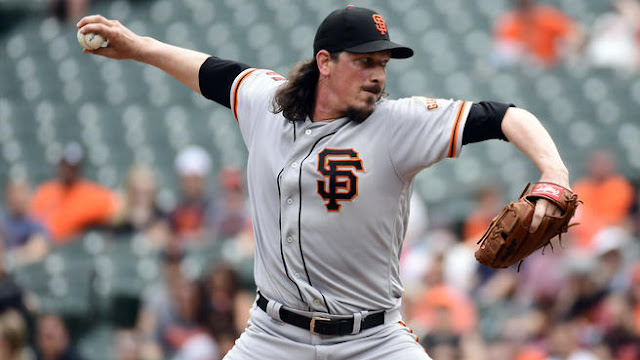 Jeff Samardzija: Shark is signed through the end of 2020 at just under $20 million.  He threw over 200 innings for five straight seasons until injuries hampered him in 2018.  He had a decent season last year at age 34, and since the Giants are looking to shed salary, it probably wouldn't take too much to acquire him in a trade.  I don't expect a miracle, but I'd rather see the Phillies overpay a dependable veteran for a single season than to overpay a guy like Zack Wheeler for four years and lose a draft pick. 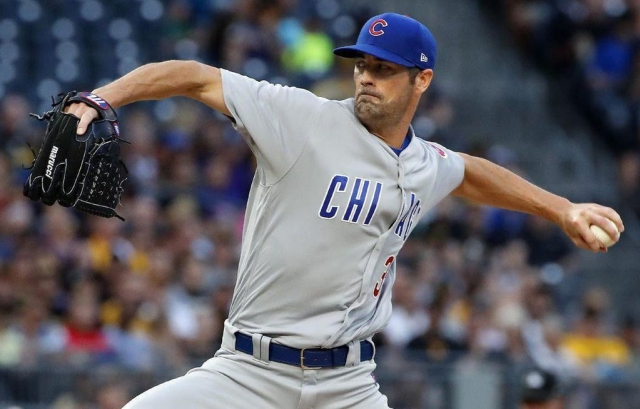 Cole Hamels: I'm kind of surprised that this hasn't happened already.  Hamels has not only expressed an interest in returning to Philadelphia, but he's come right out and said that he would be willing to take a one year deal.  This would give the Phillies a quality left handed starter, and it would bookend Hamels career where it began.

With each of these moves, here is how I would project the 2020 Philadelphia Phillies 26 man roster: 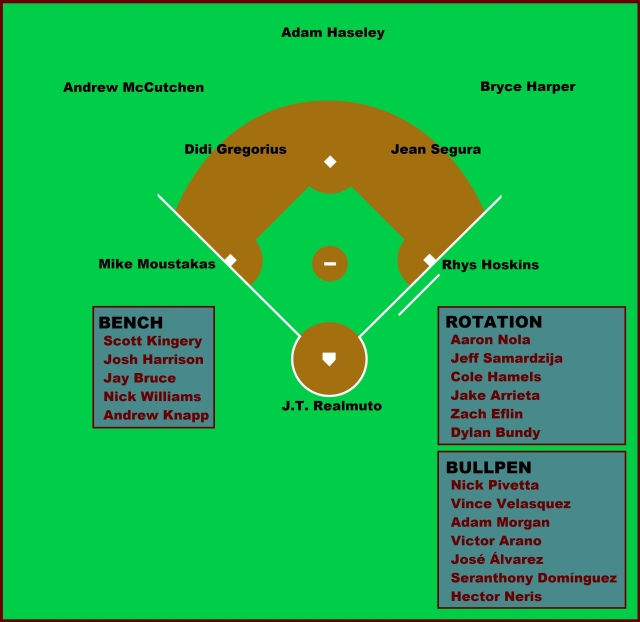 At a glance, one of the drawbacks of this projection is that it would include three pitchers who are 34 or older and who have had a variety of health concerns over the past few seasons.  However, the upcoming season will see the major league roster size increase from 25 to 26.  Instead of keeping an additional bat on the bench or specialty reliever, I think the best use of this extra man is to go with a six man rotation.  This would give each starter an extra day of rest throughout the entire season and help lessen their workload for a playoff run.  It would also give the Phillies at least two veteran starters who are only signed through the end of 2020 (three if Hamels agrees to a one year deal).  If the first half of the season is rough, they can position themselves as sellers at the deadline without giving up any building blocks for the future.  Even if they're in first place at the at the deadline, it would free them up to move one veteran starter in a trade to make room for a Spencer Howard promotion.

The team would have a similar degree of flexibility for position players.  Scott Kingery would be available to play 2B, SS and 3B and would get plenty of starts in center field.  Additionally, newly acquired Josh Harrison can play 2B, 3B and both corner outfield spots.  More importantly, the Phillies have top prospect Alec Bohm waiting in the wings.  He'll almost certainly start the season at Triple A, but if he continues to be productive and earns a promotion to Philadelphia, the team has a few options:

Assuming Rhys Hoskins works through his 2019 offensive struggles and returns to form, I would prefer to see the Phillies trade Jean Segura.  However, he has a full no-trade clause that could potentially be a problem.  Each of these options has pros and cons, but the important fact is that they have options, and if anyone in the infield gets hurt, they can always plug Scott Kingery into a starting job and make adjustments from there.

At the end of the day, I don't think there is a realistic combination of moves that would make the Phillies the favorites to win the 2020 World Series, but there are plenty of adjustments to be made to get them into the playoffs.  After that, anything can happen... just ask a Washington Nationals fan.

UPDATE (7:00 pm): Well, that didn't last long.  This afternoon, Jon Heyman announced that Mike Moustakas signed a 4 year, $64 million dollar deal with the Cincinnati Reds.  The only announcements so far from Philadelphia have been that they came to terms with Andrew Knapp and they claimed a relief pitcher named Trevor Kelley off of waivers from Boston.