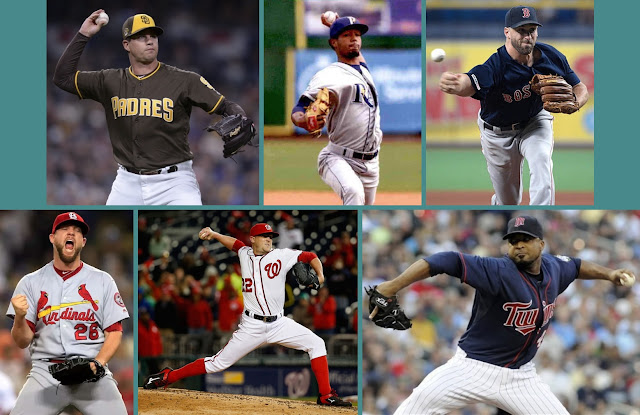 Pitchers and catchers report in less than two weeks, and the Phillies have half dozen new faces in the organization.  Unlike last year, the Phillies held off on spending top dollar on the bullpen, which is a decision I strongly support.  With a few notable exceptions, relief pitchers are unpredictable from year to year (see Brad Lidge 2008 to 2009).  If there's one part of a team where the front office should hold off on big contracts and look for low cost lottery tickets, it's the bullpen.  That's what the Phillies did this winter, and they've put together an interesting group.

Robert Stock: This 30 year old righty was acquired off of waivers from the San Diego Padres on October 30th.  He was the Cardinals second round draft pick in 2009 and spent some time with the Pirates and Reds farm teams before landing with the Padres in 2018.  He had a bicep injury in 2019 that caused him to miss the last three months of the season, but he'll be ready to go this Spring. He throws a fastball that regularly tops 100 mph and has been clocked as high as 102, as well as a pretty wicked slider, and he may find himself in the Phillies bullpen.

Cristopher Sanchez: The Tampa Bay Rays have one of the most prospect rich farms in all of baseball.  They reached the point where they had to add Sanchez to the 40 man roster, but they didn't have room.  Rather than lose him in the Rule 5 draft, they traded him to the Phillies on November 20th for a low level minor league 2B who doesn't yet have to be added to the roster.  Like Stock, Sanchez also throws a triple digit fastball, but unlike Stock, he's a 6'6" lefty who just turned 23 in December.  The expectation is that he will begin 2020 as a starter in Reading.

Trevor Kelley: On December 2nd, the Phillies picked Kelley up off of waivers from the Boston Red Sox.  He's a 26 year old sidearm pitcher who had a 1.79 ERA for the Pawtucket Red Sox and was named to the Triple A All-Star Team, but he wasn't able to replicate that success when he was called up to Boston.  He still has minor league options, so if he doesn't make the Phillies out of Spring Training, he could provide depth in the Iron Pigs bullpen.

Bud Norris: The 34 year old veteran was signed to a minor league contract on January 21st.  He was brought up as a starter in 2009 by the Houston Astros.  His departure from the Astros was a memorable one.  He was traded from the Astros to the Baltimore Orioles at the July 31st deadline in 2013, but the Astros were in the middle of a series in Baltimore at the time.  Norris began the series in an Astros uniform, and by the second game of the series, he switched dugouts as a member of the Orioles.  He got the last laugh on the third and decisive game of the series when he started for Baltimore and was the winning pitcher against the teammates that he came to town with.  He moved to the bullpen in 2016 and pitched in the Padres, Braves, Dodgers, Angels, and Cardinals.  He signed with the Blue Jays last year, but didn't make the team.  He's a longshot to bounce back in 2020, but stranger things have happened.

Drew Storen: The former Washington Nationals setup man/closer was the 10th pick overall in the 2009 Draft.  He lost his role as the Nats closer in 2015 when they acquired Jonathan Papelbon from the Phillies in the trade that brought Nick Pivetta to Philadelphia.  That trade seemed to effect him, as his numbers took a nose dive for the rest of 2015, culminating in an early end to the season after he punched a locker in frustration and broke his thumb.  He pitched for the Blue Jays, Mariners and Reds with varying degrees of success until his injury in the fall of 2017.  He had Tommy John surgery that winter, missed all of 2018 and signed a minor league contract with the Royals last year.  Time will tell if there's anything left in the tank, but like Norris, he is a low cost lottery ticket.

Francisco Liriano: The latest signing on this list the one I find the most interesting for the immediate future.  The 36 year old lefty is the only player ever to win the MLB Comeback Player Of The Year Award twice in his career, in 2010 and 2013.  He was an All-Star in 2006 and in 2011, he pitched a no-hitter as a member of the Minnesota Twins, with whom he spent the majority of his career.  Liriano also pitched for the White Sox, Pirates, Blue Jays and Tigers, and he was a member of the controversial World Series Champion Houston Astros in 2017.  The fact that he's left handed, can pitch in spot starts and had a decent 2019 in Pittsburgh make me believe that he's the most likely name on this list to earn a spot with the 2020 Philadelphia Phillies.  There's even an outside chance that he could win the 5th spot in the rotation. 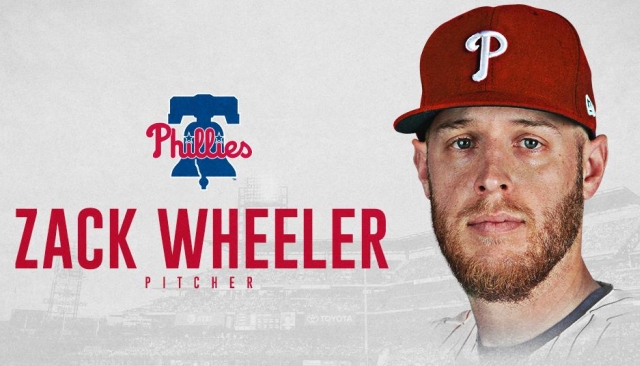 Of course, the most prominent new pitcher who will be reporting today is our #2 starter.  The Phillies smartly signed Zack Wheeler before the other big name pitchers were locked up over the winter.  They got him for $118 million over five years, which may end up being a bargain, especially considering the asinine contract the Yankees gave to Gerrit Cole.

Many experts believe that Wheeler's best days are ahead of him.  If Wheeler proves these projections to be correct, there's reason to believe that the Phillies could have a strong rotation in 2020.  Aaron Nola has proven in 2018 that he has the talent to be a true ace.  Jake Arrieta will be returning from injury and in the final year of his contract, with all of the motivation in the world to see if there's any of the 2015 Cy Young Award left in his arm.  The back end of the rotation will likely be a competition between Zach Eflin, Nick Pivetta, Vince Velasquez and Francisco Liriano. 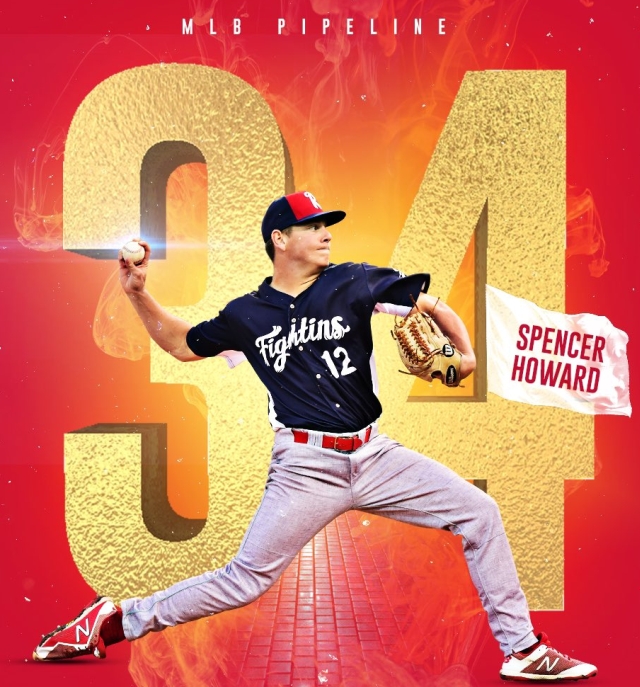 Spencer Howard is the Phillies top pitching prospect and is ranked at #34 in the top 100 prospects in all of baseball.  He's the wild card of the Phillies 2020 season.  Howard has been invited to Spring Training, but I can't imagine a scenario in which he starts the season anywhere but Lehigh Valley regardless of his performance.  Not only will the Phillies not want to start his service clock a year early, but they're going to want him to get some experience throwing the redesigned baseball - the one that the commissioner's office have been lying through their teeth about (seriously, Rob Manfred's tinkering has been the worst thing to happen to baseball since steroids).

If everyone stays healthy and Howard's dominance continues, he may be called up before the All-Star Break.  That would give the 2020 Phillies a rotation fronted by Nola, Wheeler and Howard, which has the potential to be one of the most effective rotations in the National League.  His promotion would also have a trickle down effect on the bullpen, making three of Eflin, Pivetta, Veladquez or Liriano pitching in relief. 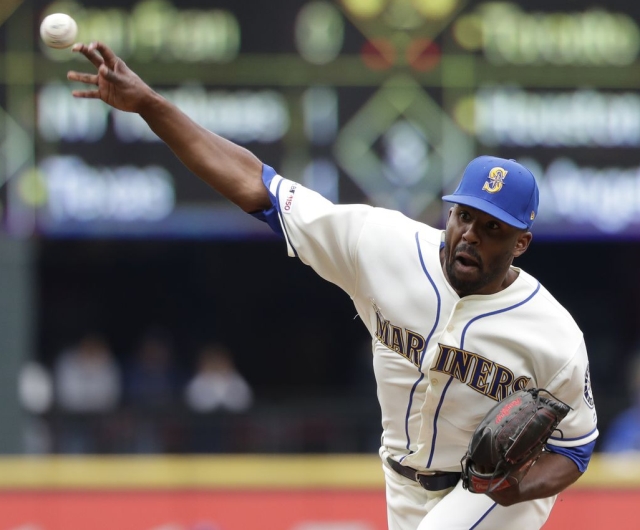 UPDATE: Earlier today, the Phillies placed Trevor Kelly on waivers to make room on the 40 man roster for Reggie McClain, who was claimed off of waivers from the Seattle Mariners.  I've never seen this man pitch, but I already love him for his "you look like you've just seen a ghost" expression during his delivery.  Like Kelly, he was dominant in the minors, but got lit up at the major league level in 2019.  However, there may be more to the story.  He gave up 14 runs in 21 innings out of the Mariners bullpen, but 11 of those runs were against the sign-stealing Houston Astros.  McClain may wind up being a diamond in the rough, and he has three minor league options remaining.  Smart move!