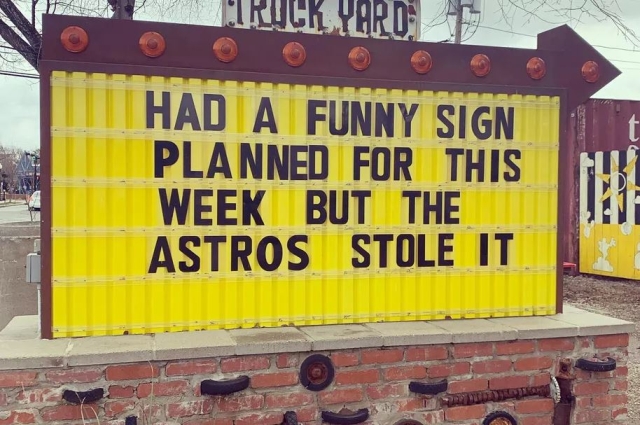 Major League Baseball issued the lightest possible slap on the wrist to the Houston Astros for three years of blatant cheating and sign stealing.  They'll lose a first and second round draft pick for the 2020 and 2021 draft, a $5 million dollar fine, and a one year suspension for manager A.J. Hinch and general manager Jeff Luhnow.  The Astros quickly responded by firing their manager and general manager.  None of the players who cheated will be punished in any way.

So, from an organizational perspective, the franchise was able to trade four lottery tickets and the cost of one season of a league average middle reliever for the 2017 World Series Championship and a 2019 American League Championship.  The penalty is so laughably weak that I almost wouldn't blame the Astros for leaning into it.  Go ahead and throw Doug on the big screen and play "Banging On A Trash Can" during the 7th inning stretch. 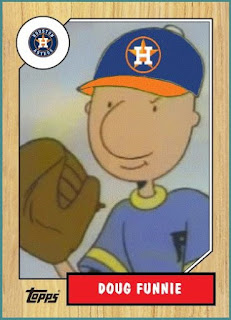 Five million dollars sounds like a lot, but it's a small fraction of the added revenue earned by the Astros as a result of cheating their way to the World Series.  To put this in perspective, consider that the Astros were awarded over $30 million dollars in postseason bonus money for the 2017 season alone.  That doesn't include the additional revenue from parking, merchandise and concession sales throughout the post-season.  Is this going to deter future cheating?  I doubt that many teams would pass up the opportunity to trade four draft picks and $5 million bucks for a title.  Apparently, cheating is good business even if you do get caught, and there's always the chance that you get away with it.

The fact that no players are being punished is another problem as the league has set a prescient that players can freely violate the rules of the game with impunity.  The Astros sign stealing scandal was a collaborative effort with many people involved in the scheme.  What's to stop individual players from engaging in the same behavior, even if their team is clean?  Surely, it wouldn't take a whole lot of creativity for a single player to hire someone to purchase season tickets, steal signs at home games, and signal him when a fastball is coming.  There's plenty of cheap technology available to make it happen.  Hell, the Astros did it with a few cameras and a guy banging on a trash can.  Sure, they might get caught, but the players union can argue (and rightfully so) that since no players from the 2017 - 2019 Houston Astros were punished, their client should also get off with a warning.

Several high profile players and members of the media have spoken out to say that the Astros should have their World Championship vacated.  Frankly, I don't feel that this goes far enough.  The bare minimum punishment should have been a fine equal to the estimated added revenue for the Astros post-season appearances over the past three seasons, a one year ban for each member of the team (including pitchers and the entire coaching staff), and a lifetime ban for the manager and general manager, in addition to the loss of draft picks and a ruling to vacate the 2017 World Series and to strip José Altuve, Justin Verlander and Yordan Alvarez of their MVP, Cy Young and Rookie Of The Year awards respectively.  That would be the minimum appropriate punishment.  If it were my decision, I would add to that list a one year ban for the Houston Astros franchise.  The season schedule would be reconfigured, and the Houston Astros would be eliminated from the 2020 season altogether.

The punishment should be enough to cripple the franchise to the point where no team or player would dare risk this behavior.  With the punishment being as light as it is, I assure you that we have not seen the last stolen World Series.  The potential rewards are too great, and the deterrent is insignificant.