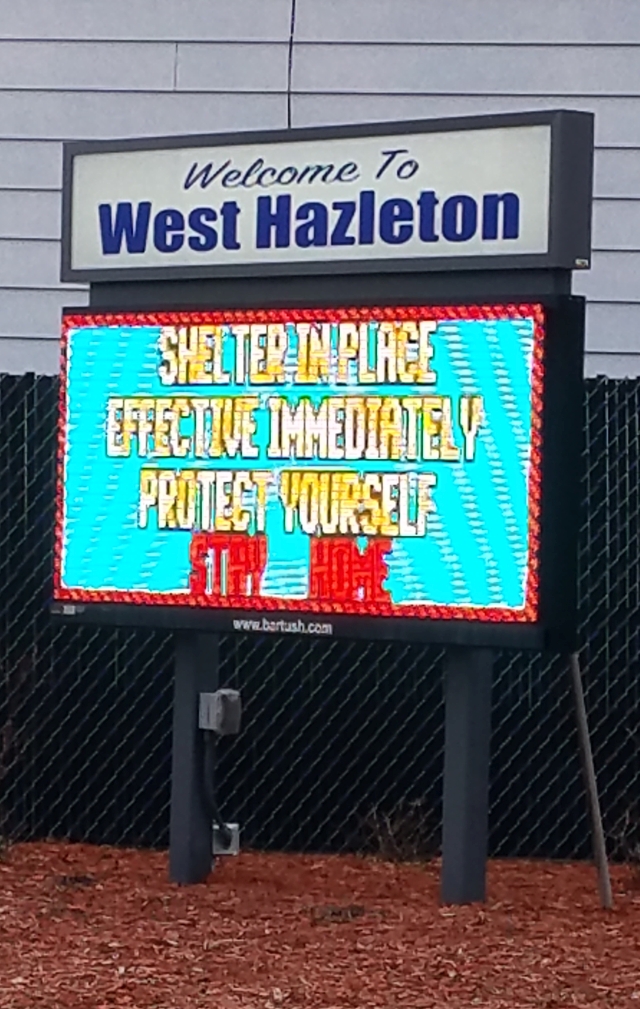 Throughout all of the craziness that we've all been going through, I have tried my best to stay in a positive frame of mind and make light jokes about it.  I don't think that I'm a very funny person, but it's not from a lack of trying.  I can totally see what draws people to stand-up comedy.  It can be addictive when you get on a roll and really make people laugh.  It's also the way that I deal with stress.  Sometimes it helps, sometimes it doesn't, but it's nearly always the security blanket I reach for when things get tense.

Personally, I don't mind sheltering in place.  I'm an introvert.  Quite frankly, with the exception of walking the dog and going to ballgames, concerts, restaurants and the Bloomsburg Fair, I could live until a very old age and be perfectly content to stay in my house.  I'm not agoraphobic or anything, but I genuinely enjoy spending time at home.  It's how I've always been, and I've come to accept that about myself.  When the news spread about the pandemic and social distancing, my first thought was that I am custom-made for this.  I've been practicing social distance for most of my life.

The worst parts about this for me have been the anxiety.  I fell asleep on the sofa last night and woke up to use the bathroom, and I have a slight pressure feeling at around the top of my stomach.  Logically, I know that I'm probably just sore from carrying a desk in from my garage and moving furniture around and running Ethernet wires across the house so that my wife and I can both work from home.  It also could have something to do with my recent eating habits.  Food is right alongside comedy when it comes to the coping mechanisms I have for dealing with stress, and so my diet has gone all to hell over the past few weeks.  I had an especially big lunch and I snacked quite a bit, and it's not unusual for my stomach to feel bloated the morning after I've eaten too much.  It could also be that I slept at a weird angle.  I kind of just collapsed in the sofa while watching Phillies videos on YouTube, so I could just be sore from that.  Or maybe I'm just sore from when the dog was laying on top of me.

If not for Covid-19, I wouldn't have given this a second thought.  I would have taken some Tums and went back to sleep.  However, since I've spent a month having the symptoms and warning signs drilled into my head for a solid month, it has me worried that I've contracted the virus.  Maybe I got it from work before they finally sent me home with my computer.  Maybe someone at the grocery store passed it to me.  Hell, maybe a grouchy fast food worker came to work sick because they have bills to pay, and they figure if they have to deal with this virus, so does everybody who ordered a hamburger that day.  You could come up with a million scenarios to torture yourself with, from plausible to ridiculous.  When all you see and hear at every turn is Covid-19, it's difficult to stop your mind from wandering down these paths.  So, here I sit at 3:30 am.  I'm focused on this weird pressure that I'm feeling.  Is this the tightness in the chest people have reported?  It feels like it's lower than my chest - more like a stomach discomfort, but I'm not a doctor, so what the hell do I know?  I'm focused on my breathing.  I'm not having trouble catching my breath or anything, but I do feel that discomfort in my stomach when I take a deep breath.  Is that normal, or is this all in my head?  Maybe any difference I'm noticing is the result of sitting here in the middle of the night randomly taking deep breaths and looking for reasons to be alarmed based on a list of symptoms I've heard as often as any song I've listened to this year.

So, what the hell do I do?  Do I go to the hospital - the one place in town where the virus is most likely to be - knowing that they don't have a cure and that I'm not in bad enough shape to need oxygen?  Seems like a bad idea.  If I don't have the virus when I walk in the doors, I very well might have it when I leave after sitting in a waiting room that has no doubt had dozens, if not hundreds of people with the same concerns I have breathing into their outdated magazines.  Do I just lay back and try not to worry?  What if it gets worse, and I miss my opportunity to catch it early?  Do I just sit here for another hour doing bizarre deep breathing exercises and studying how it makes me feel, fully aware that my brain is searching for reasons to worry instead of looking for reasons not to?

There are no easy answers to any of this.  It is what it is.  Chances are that we're all going to catch this at some point over the next year, so if I don't have it now, I very well may get it later.  I suppose I'll do what we're all doing.  I'll continue to shelter in place and try to deal with this as best I can, which in my case is to write nonsense for this blog.  I've got about a dozen entries already written and scheduled to post at a future date in 2020.  If you've been here before, you know the drill.  They're the same old schtick of "on this day x number of years ago, this thing I liked from my childhood happened" or "the Phillies did something at some point between 1883 and now that I have an opinion about" or "hey, look at this thing I found and/or ate".  You know - social media without the socializing.

In a perfect world, I would be visiting Dad later on.  It's his 61st birthday today, but he's a pretty severe diabetic, and taking chances like that is a really bad idea.  So, I'll give him a call and write some nonsense about an old discontinued flavor of Doritos or something else that few people, if anyone, will ever read.

Whoever you are and however you got here, thank you for listening to the rambling anxieties of a weird nerd on the spectrum who's living through Captain Trips with all of you.  Hopefully we can all look back on this someday and tell each other stories about when we all worried about people breathing on us.  Until then, I hope you and those close to you stay safe.