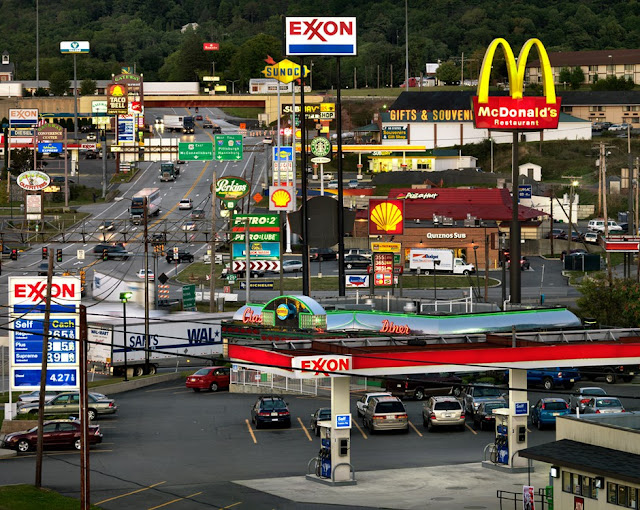 Breezewood
Edward Burtynsky
This photo has been making the rounds on social media for over a decade, but it's rarely credited to the photographer.  It was taken by Edward Burtynsky, and it's published in his award winning 2009 collection: Oil.  It shows a strip of Route 30 in Breezewood, Pennsylvania that connects I-70 to the Pennsylvania Turnpike.

According to Amanda Kolson Hurley of Citylab, this massive rest stop exists because of a law in the 1950's that prohibited federal funds to be spent on a road that would take drivers from a free road to a toll road.  The end result is a slow moving stretch of the Lincoln Highway between Interstate 70 and the Pennsylvania Turnpike upon which a wide variety of motels, gas stations, retail stores, restaurants and fast food franchises have popped up.  Catcher Richard Stock called it "an artist rendering of the ideal minor league bus stop." 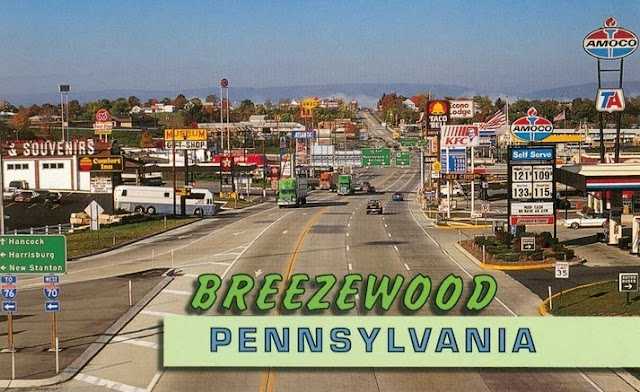 There's a surprising number of postcards for the small town of Breezewood.  There are over 200 available for sale on eBay right now.  This one from the early 90's shows the same stretch of highway from the other side.  If you look closely in the background on the left hand side, you can see the McDonald's sign that is in the foreground on the right of Mr. Burtynsky's photo.