Booed Out Of Philadelphia

Dave Hollins
Philadelphia Phillies (1990-1995, 2002)
Twenty-five years ago, Phillies slugger Dave Hollins was traded to the Boston Red Sox for outfielder Mark Whiten.  According to the Miami Herald, the switch hitter was literally booed out of town after injuries derailed his career following the 1993 NL Championship season.

In his debut with the Red Sox, Hollins filled in at DH for an injured Jose Canseco and hit a bases loaded single in the 6th inning to score Willie McGee from third and give Boston the lead in their victory over the White Sox.  Unfortunately, this was the lone highlight of his career as a member of the Red Sox.  He would play only four more games in Boston before being placed on the 60 day DL with a fractured right wrist.  The next six years of his career was spent bouncing around the American League with the Twins, Angels, Blue Jays, White Sox, Devil Rays, Orioles and Indians.  He found some success in 1996-1998, but he was never able to bounce back to the player he was in Philadelphia from 1992-1993.  Hollins returned to Philadelphia in 2002 where he played the final season of his major league career.  He remains with the Phillies organization to this day as a scout. 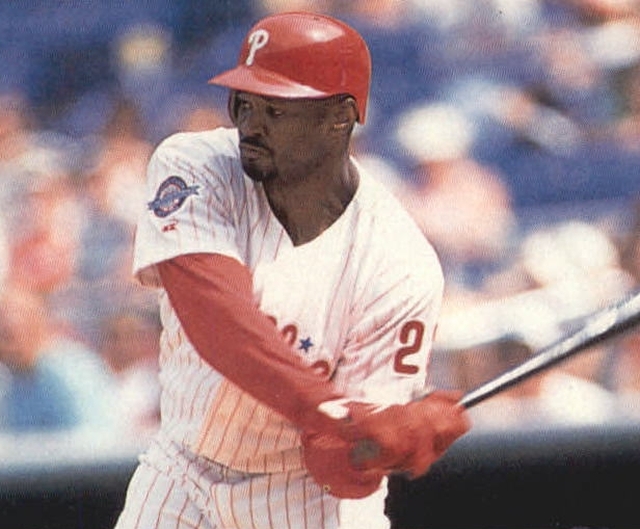 The Hollins-Whiten trade didn't work out much better for the Phillies than it did for the Red Sox.  In just his second game as a member of the Phillies, "Hard Hittin" Mark Whiten strained his right hamstring running out a ground ball in extra innings.  He would go on to bat .254 in 120 games for the Phillies from 1995-1996 before the team released him in June '96.

Whiten was the second Phillies outfielder acquired in a trade during the 1995 season to suffer an injury in his second game with the team.  On June 18th, the Phillies acquired center fielder Andy Van Slyke in a trade with the Orioles.  He suffered a bruised rib cage in his second game which kept him out of the lineup for several weeks.  Van Slyke returned to action for the snakebit Phillies and retired after the 1995 season.