Yea Or Nay On Ramune 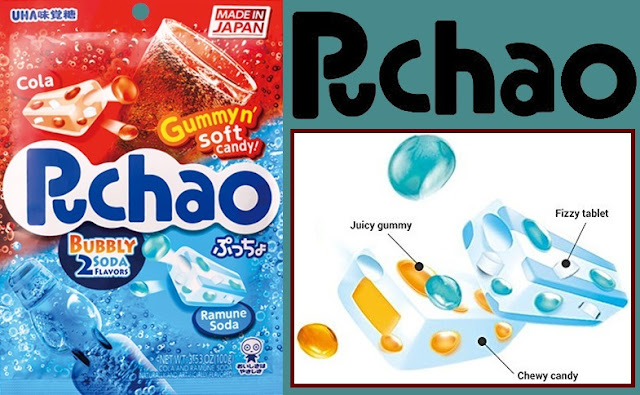 Puchao Bubbly Soda candy
UHA Mikakuto
I tried the Fruit Flavored Puchao candy earlier this year and I enjoyed it quite a bit.  The Bubbly Soda flavors weren't as good as the grape, strawberry, mango and melon candy, but they were interesting and I'm glad that I gave them a try.

The main way that these differ from the fruit flavors is the presence of a fizzy tablet embedded in the candy, which is meant to give you the feeling of carbonation that you get from drinking soda.  These don't give an overwhelming fizzy sensation like you would get from a candy like Pop Rocks.  It's subtle, but you can tell that there's something different about it compared to the other Puchao products.

The cola candy tastes like a combination of pink bubble gum and gummy Coca Cola bottle candy that I had when I was a kid.  It's worth trying, but unless you're really in love with this combination, I doubt that it's a candy that many people will want to have on-hand. 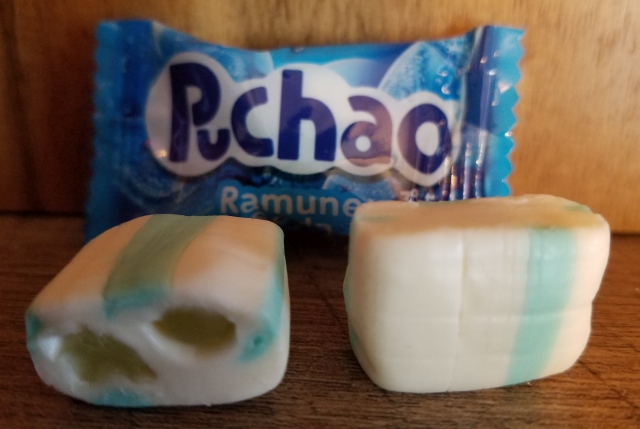 I don't know how to explain the Ramune flavor.  Prior to having this candy, I've never heard of Ramune Soda, so I went into this with no idea of what to expect.  The best way I can think of to describe it is to say that it tastes like you're eating a lemon scented detergent or kitchen cleaner, but it's somehow still pleasant.

Since I've never had the original product that this candy is attempting to replicate the flavor of, I went back to the store to pick up a bottle of Ramune soda.

Right off the bat, I was in over my head.  The bottle of this beverage is way more complicated than it has to be.  It's got a tear-off plastic seal that covers a plastic knob that breaks apart into two pieces.  This plastic knob sits on top of a slightly ridiculous blue plastic donut that encapsulates the top of the glass bottle.  In the center of this donut is a glass marble.

The side of the label instructs you to take the plastic center piece and use it as a plunger to force the glass marble into the bottle.  The marble then falls into a little cradle that is formed by the narrowing of the glass bottle about a quarter of the way down from the top. 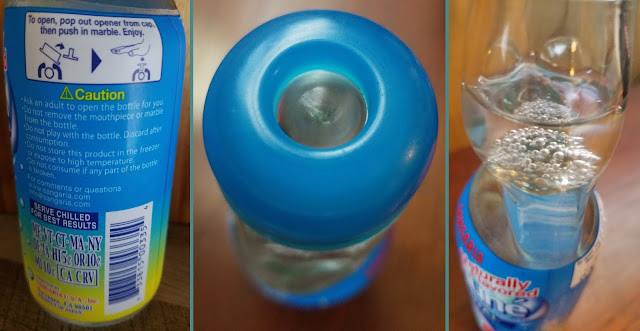 Once the marble is in the soda, your beverage will begin to fizz.  Then, you must hold the bottle at a specific angle so that the marble is caught in the cradle and doesn't fall back to block the opening when you take a sip of soda.

I would expect that this would be the greatest soda ever made for all of the nonsense that you have to go through to drink it, but it's pretty average.  It tastes sort of like a generic store brand Sprite with a hint of ginger ale.  It doesn't taste bad, but there's certainly nothing special about it.  It also doesn't really taste much like the candy.  The only thing they have in common is that both are trying to produce a lemon flavor.  Quite frankly, I think the Ramune flavored Puchao candy is much more enjoyable than the soda, despite it's weird household cleaner flavor.

My recommendation is to give the Puchao Bubbly Soda candy a try.  However, unless you find something especially fun or attractive about jamming a marble into a glass bottle, pass on the soda and just buy a plain old aluminum can of Sprite, 7-Up, Sierra Mist, or any one of a dozen other lemon flavored sodas that have more flavor and fewer silly gimmicks.