The Day Babe Came To Town

Babe Ruth
October 22, 1923
Cranberry Ballpark - Hazleton, PA
Hazleton doesn't have too many claims to fame, but if you were to talk to someone from the area about something significant in our town's history, there's a good chance that they're going to mention the day that Babe Ruth came to town.

Back in the days before below-average middle relievers signed contracts for six million dollars, some players would supplement their income by barnstorming small towns across the country to play local teams in front of fans who probably have only ever heard them play on the radio.  Babe Ruth was especially fond of going on barnstorming tours during the off-season, and 97 years ago today, he brought a team to play an exhibition game at the old Cranberry Ballpark in Hazleton.

In the fall of 1923, Babe brought a team to Hazleton that included starting pitcher Dutch Ruether.  The lefty was a member of the World Champion Cincinnati Reds in 1919 (the World Series in which the infamous Black Sox scandal occurred).  At the time, Ruether was a member of the Brooklyn Robins (Dodgers).  He played alongside Ruth for barnstorming tours, but he would also go on to become a teammate of Ruth on the 1926 and 1927 Yankees.  The other pitcher on the team was New York Giants knuckeballer Jack Scott.  Scott pitched against Ruth's Yankees in the World Series just a few weeks before this exhibition game in Hazleton.  Scott's career would include the 1927 season with the Phillies where, on June 19th, he pitched two complete games in a single day, going 1-1 in both games of a double header against the Cincinnati Reds.  The other two players on Ruth's traveling team did not appear in the Major Leagues during their careers.  First baseman Harry Hesse was a member of the Hartford Senators of the Eastern League, and catcher Jack Tee played for the Jersey City Skeeters of the International League.  Ruth's team was rounded out by four local players: Brogan and Fichter (Beaver Meadows), Cooper (Jeanesville) and Fredericks (Hazleton).

While there are no known photos of the day that Babe Ruth came to town, there are quite a few newspaper articles, including a few which noted that the coal mines suspended operations at noon, and local schools let out early so that everyone could go to the game. 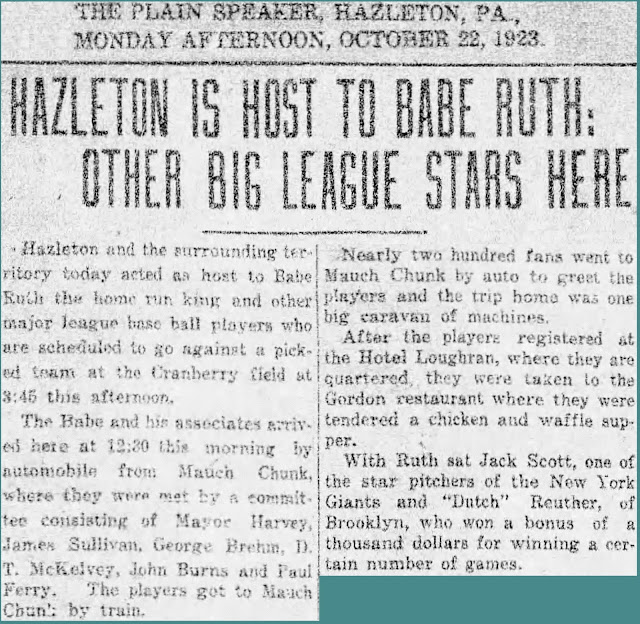 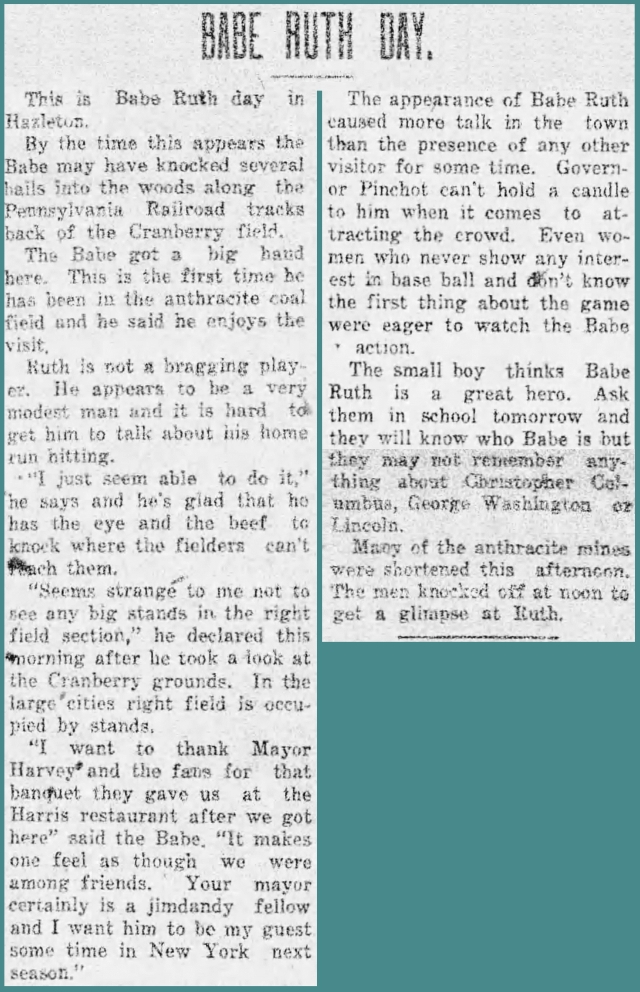 Hazleton fielded a team of locals to play against Babe Ruth's barnstormers, and they managed to defeat Ruth's team by a score of 4-0.  While it may have been a shock that a bush league team shut out a team that included the greatest hitter who ever lived and a pitcher whose team just won the World Series, it was an even bigger shock that Hazleton's starting pitcher, Nick Mondero, struck Babe Ruth out twice.  Nick would go on to have a 12 year minor league career, most of which he spent pitching under the name of Nick Harrison. 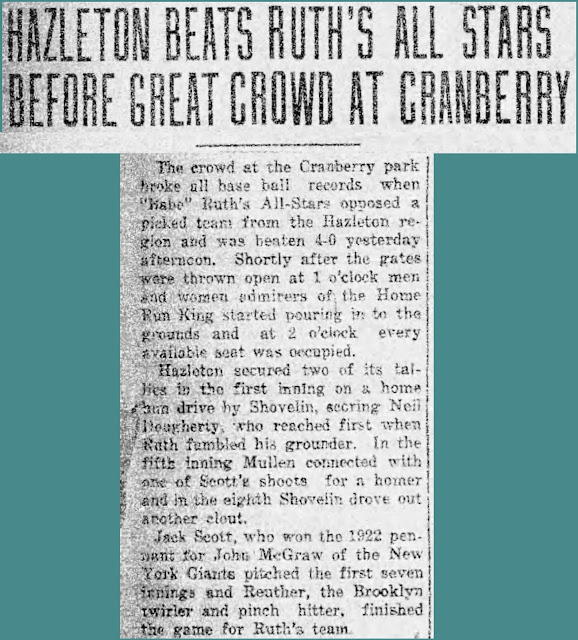