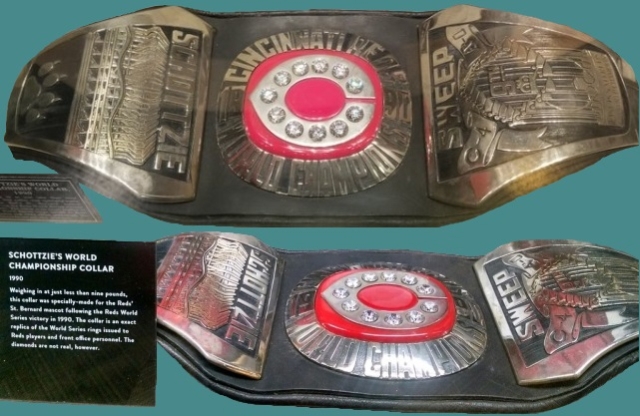 Schottzie's Collar
Cincinnati Reds (1990)
When I first saw this baseball oddity, the person who posted it thought it was a pro wrestling title belt made to commemorate the World Series Championship that the Cincinnati Reds won thirty years ago.  He was half right.  It was commissioned in 1990 by Reds owner Marge Schott and made to look like the championship rings from her team's sweep of the Oakland Athletics in the Fall Classic, but it's not a belt.  It's a dog collar that was made for her beloved Saint Bernard, Schottzie, and it's on display in the Cincinnati Reds Hall Of Fame Museum (photo credits: Sean Ross Sapp and Mike Selock).

I'm not the biggest fan of Ms. Schott, but while she was a heavily flawed human being, no one could ever say that she didn't love her big furry friend.