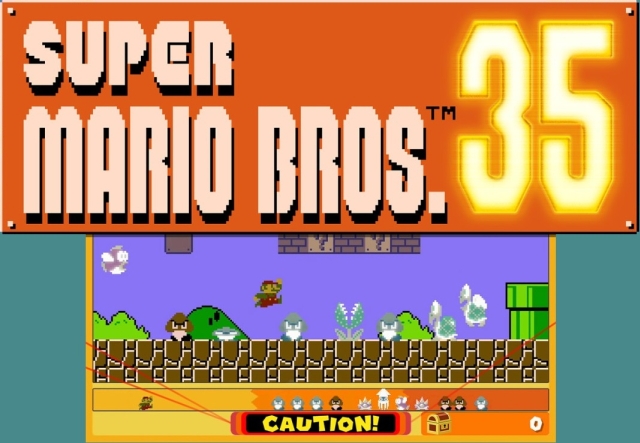 Super Mario Bros. 35
Nintendo Switch (2020)
Nintendo gave gamers a very nice surprise on Friday with the release of Super Mario Bros. 35 on the Nintendo Switch Online service.  It's a 35 player game that attempts to bring the concept of Tetris 99 to the classic Super Mario Bros.  Gamers play through a levels in a seemingly random order while a clock counts down.  When you defeat enemies, it adds time to your clock while sending the enemy to the screen of one of the other 35 players that you're competing with.  Additionally, when you collect 20 coins, you can cash them in for a randomly selected power up, which can come in the form of a mushroom, a fire flower, a pow block or a star.  You get one life, and when you've used it up, you're out.  The last gamer standing wins. 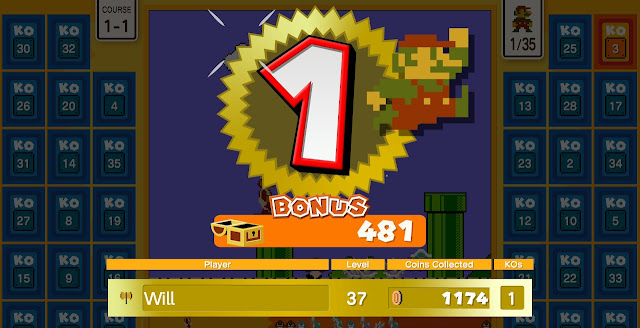 There's no way to say this without it being mistaken for arrogance, so I'll just come right out and say it.  This game is far too easy.  Perhaps some of this can simply be chalked up to experience.  I was five years old when the first Super Mario Bros. game began appearing in arcades here in the States, so I have literally been playing it for its entire 35 year run.  However, it's more than that.  While I'm pretty good at Super Mario Bros, I am by no means a professional gamer.  I'm sure the folks who play in competitive tournaments for cash prizes or who break records on Twin Galaxies could absolutely smoke me at this, or any other game.  The reason this game is so easy is a flaw in the game itself.

When I play Tetris 99, the experience is tense.  I feel like I have to be in the zone and at the top of my game to even have a chance at finishing in the top 5, let alone to get first place.  The opposite is true for Super Mario Bros. 35, where it feels like I'm being encouraged to play slow and pokey, like the way my grandmother used to play when I was a kid.  There's no reward for doing a speed run through a level, and there's plenty of reward from crawling through each stage as slowly as possible.  The game treats the act of defeating a goomba and sending it to an opponents screen as an attack that's meant to make the game more difficult for your competitors, but it has the opposite effect.  When I reach a section of the game with 20 or more enemies, I can just bounce off of each of them and chain stop them into receiving bonus time.  As the game progresses, your opponents can send you more advanced enemies, like hammer bros or Bowser, but even that is a cakewalk when you can just press the X button and cash in 20 coins for a fire flower, star or pow block. 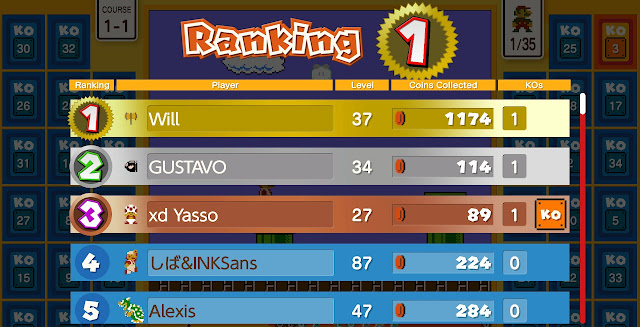 I've always found the purpose of a battle royale style game is to create a pressure filled challenge.  Frankly, I find this to be less tense than the 300 second level clock in the original Super Mario Bros. for the NES.  Once you get the idea that slow and steady wins the race, you almost have to try to lose.  Just mosey on through a level as slowly as you can, bounce off whatever enemies get sent to you from your opponents, and wait for them to defeat themselves by mistiming a jump and falling into a hole.  I've been told that being methodical is a strategy in any competitive game, but when the most effective strategy to win is "be as lazy as possible", you have to question if the game is achieving what it set out to do.
I don't mean to rip the game to shreds.  It's a lot of fun, and it's free for Nintendo Switch Online subscribers, but I won't be putting up too much of a fight if Nintendo makes good on their threat that this game will be available for only a limited time.  I'm glad they made it.  I'm sure I'll have fun with it in the months ahead, but I really won't miss it too much when it's gone.