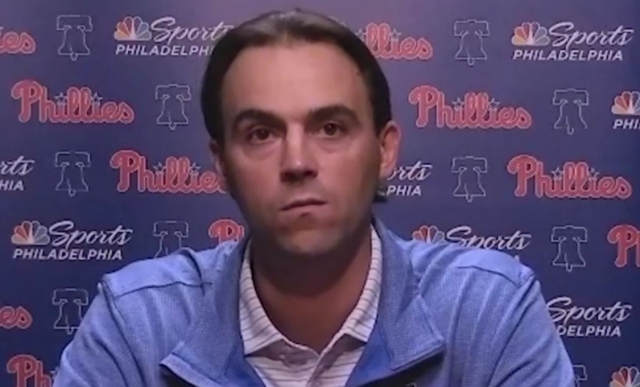 The Phillies announced that Matt Klentak has stepped down as the team's general manager.  This resulted in a wave of fans and podcasters rushing to Twitter to celebrate like we just won a playoff series.  I'm not exactly sure why everyone is so happy, because the man who is really calling the shots hasn't gone anywhere, and it seems like he's even less inclined to spend in 2021 than he was in 2020. 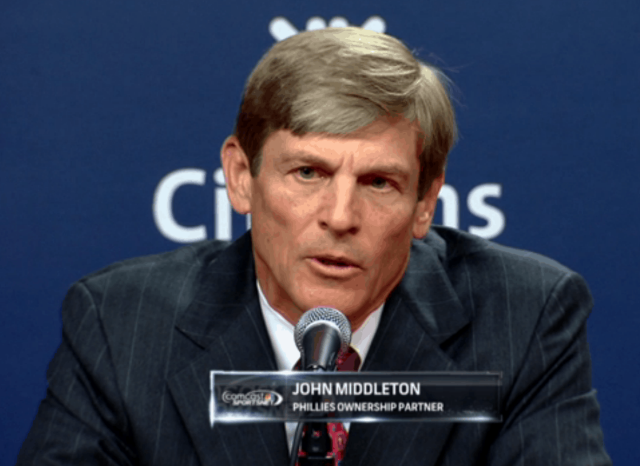 John Middleton and the Phillies ownership group will not go over the luxury tax threshold.  Period.  End of story.  I'll be happy to say that I was wrong the second that the team spends a single dime over the threshold, but until that happens, it is pointless to speculate about any situation that would take them into that level of payroll.

Naturally, fans on Twitter can't wrap their head around this reality and seem hell bent on spending yet another winter complaining that Phillies are "too cheap" to go over the luxury tax threshold.  It's a discussion that goes absolutely nowhere.  They're not going to do it, and whining about it on the internet and talk radio isn't going to change a thing.  It's also a silly thing to complain about, because the team's refusal to cross the luxury tax threshold is not really the problem with this franchise.  Plenty of teams are able to contend for a championship while staying well under the luxury tax.

Here are the teams whose 2020 payroll was above the league average.

The Phillies had the fifth highest payroll in baseball; just a hair below the luxury tax threshold.  The four teams who spent more did reach the playoffs, but what about the rest?  The Cardinals had the 9th highest payroll this season.  The Braves were right behind them at #10.  The White Sox, Reds, Padres and Twins all reached the post season with the 12th through 15th highest payrolls in baseball respectively.

How about the teams whose payroll was below the league average in 2020?

The Blue Jays had the 18th highest payroll in baseball in 2020.  At just under $145k, they have fielded a team that cost less than the league average, and they were unable to play a single game in their home ballpark all season, but they managed to make it into the playoffs.

One spot below them is the Giants, who finished the season with a record of 29-31 - one game better than the Phillies record of 28-32.

The Brewers snuck into the playoffs on the last day of the season with the 22nd highest payroll in the game, but take a look at #25 and #27.  The Indians and Rays didn't sneak into anything.  Cleveland finished with a record of 35-25 - one game behind the division champions, and Tampa Bay dominated their division and had the best record in the American League at 40-20.

Then there's the Miami Marlins, who finished with a record of 31-29 and who went 7-3 against the Phillies, despite having the third lowest payroll in all of Major League Baseball.

Don't complain to me that the Phillies are being "cheap" and if they just spent a little bit more to go over the luxury tax that everything would be all better.  If they can't spend $203 million wisely enough to contend for a title, don't expect me to believe that $208 million would suddenly make them financial geniuses who could get the job done.  The problem this team has with money isn't how much they spend - it's how they choose to spend it. 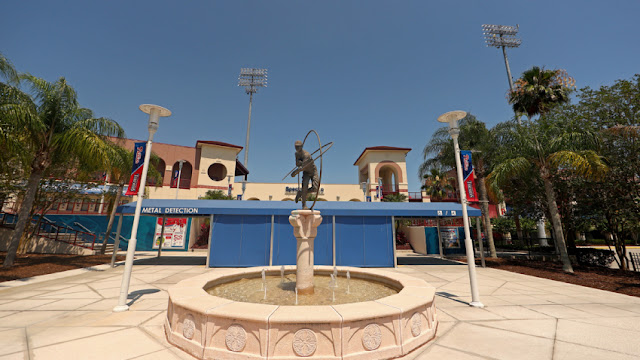 The real issue that has hindered this franchise for over a decade is poor scouting, poor coaching and questionable player development.  That's not a problem that a new GM can solve in a single winter.  Even if the new GM swoops into town and fires every last scout and coach in the system and replaces them with the best and the brightest, it wouldn't make a significant difference for at least a few years.

As much as I hate to admit it, the Phillies rushed the rebuild, and it cost them their window of contention.  I was as happy as every other Phillies fan when they signed Bryce Harper and Andrew McCutchen.  I was even happier when they traded Sixto Sanchez and Jorge Alfaro for J.T. Realmuto.  However, when you set aside the "best catcher in the game" hyperbole, which has been chanted so frequently in Philadelphia that it could be mistaken as the official city prayer, these acquisitions have brought the Phillies one season of .500 baseball, followed by a season below .500.  They alone are not enough to get the Phillies to the post-season. 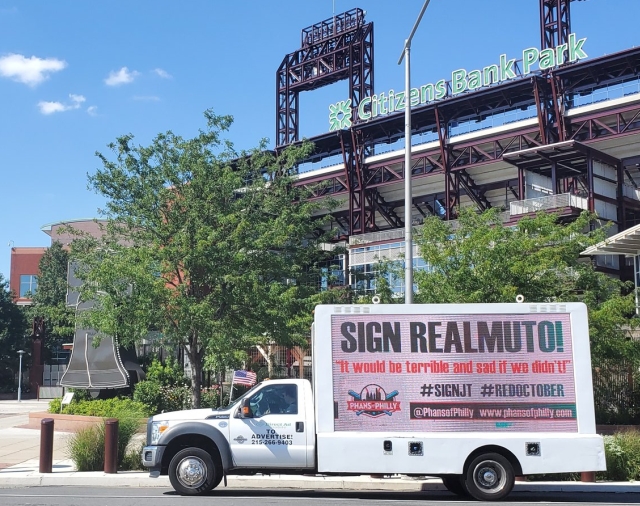 Realmuto will be entering his age 30 season.  Catchers don't tend to age well, and if the last two weeks are any indication, J.T. may not be the picture of health that we all hoped he would be.  That's not quite as big of a deal if the National League permanently adopts the designated hitter rule, but if they're resigned to him eventually being a DH, they could get a much more productive bat at the money Realmuto will cost.

Speaking of money, Realmuto has not been shy in saying that he wants a contract that will "set the market" for his position and shatter the record for the highest amount paid to a catcher.  Presently, that record is held by Buster Posey, who earned $21.4 million per year after signing an eight year, $168 million dollar extension with the Giants.  The low estimate for J.T. Realmuto is $25 million per year for five or more years.

Could the Phillies afford J.T. and remain under the Luxury Tax?  Sure they could.  Jake Arrieta's $20 million per year is coming off of the books in 2021.  Assuming we don't resign Didi Gregorius, his $14 million is freed up as well, as is David Robertson's $11 million, and the $10 million that the Phillies paid Realmuto last year.  That's $55 million dollars. 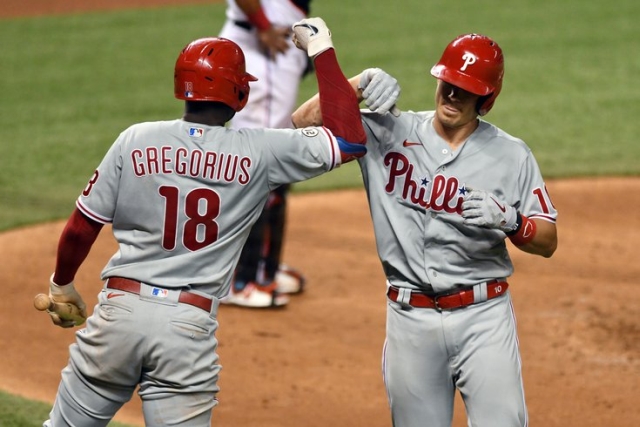 If this team won the division and was a championship contender with a robust farm of prospects, or if they had no other pressing needs that kept them out of contention over the past two years, I would say that it's a no-brainer to bring back both J.T. and Didi.  However, the Phillies are not a contender.  They're a sub .500 team with at least two spots in the rotation to fill, and a bullpen that was statistically the second worst of any team in over a century.  They have question marks at second base, shortstop and center field.  They have a first baseman who may need surgery over the winter.  They have a left fielder who has missed significant time to injury since joining the Phillies, and who will be going into his age 34 season - the last year of his three year contract.

Even if you assume that the Phillies will maintain the same payroll in 2021, which is far from a certainty in the age of Covid, keeping J.T. Realmuto in Philadelphia will likely cost the team about half of the $55 million in salary commitments that they will clear after the 2020 season.  Even if we assume Realmuto makes $25 million in 2021 (which is a low ball estimate), that means the Phillies will need to re-sign or replace Gregorius, add at least one OF to replace Jay Bruce (preferably one who can play CF), two starting pitchers, and practically an entire bullpen for $30 million... total.

Now that Alec Bohm and Spencer Howard are in the majors, there are no prospects coming to save the day, or who can be dealt away for a significant return.  Everything that this team needs is going to be brought in through free agency, and it's not a particularly strong free agent class. 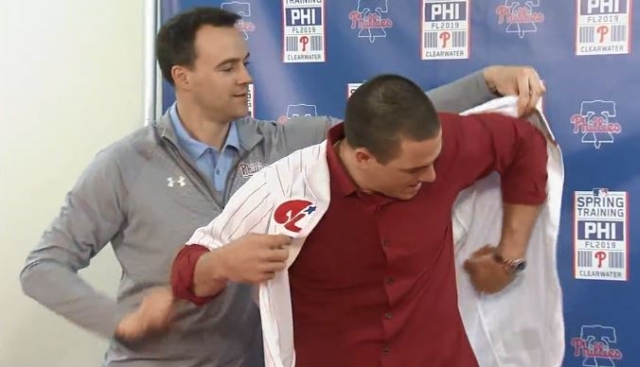 The bottom line is that if the Phillies pay what it will take to keep J.T. Realmuto in Philadelphia, they will have to go bargain hunting to fill the bullpen, and we already know what that will get us: a .467 winning percentage and third place in the division.

Andrew Knapp is certainly no J.T. Realmuto, he is an adequate catcher who can handle the job.  The Phillies aren't even close to having a respectable bullpen.  They also don't have a reliable back end of the rotation, and they don't have a replacement for Didi.

I like J.T. Realmuto too.  I agree that he's the best catcher in baseball.  However, if the choice is between retaining his services and addressing the more detrimental needs of this ballclub, the decision is pretty clear.  They can either choose to end 2021 with the best catcher in baseball, or they can choose to contend for a championship.  They will not pay to do both.