Hershey's Kisses: Vampire
Hershey (2020)
For a little while in the late 90's, my dad and I both lived at my grandparents house.  During that time, Dad and used to watch WWF Raw every Monday night at 9:00.  This was during the Attitude Era - a time when "Stone Cold" Steve Austin and The Rock were at the highest points of their pro wrestling careers.  At this point, you may be asking yourself what any of this has to do with Hershey Kisses that came out over 20 years later.  Stick with me... I'm getting to that.

The Rock was more famous for the way he talked than the way he wrestled.  It's not that he was bad in the ring; he was just phenomenal on the microphone.  When he spoke, The Rock referred to himself exclusively in the third person, and he referred to nearly everyone else as a "jabroni".  He had dozens of catch phrases that inspired sold out arenas to shout them in unison, but the one that my dad seemed to like best is when The Rock said he was going to kick someone's "rudy poo candy ass".  This gave my dad the idea for a type of hard candy or lollipop that is shaped like a butt.  It's been over two decades and he still believes this is an idea that would have made millions of dollars.

I wasn't as fascinated with an ass-shaped confection as my dad, but his idea did lead to an impromptu brainstorming session where we watched Raw and came up with different ideas for new candy products.  My best one was to make a chocolate bar in the shape of a bat that was filled with cherry or strawberry cream.  Everyone who bought it could then bite the head off of the bat and watch the red filling ooze down.  This bar would, of course, be called Ozzy.  I was as enamored with this idea as my dad was of his own.  It would appeal a wide variety of people, from children and their parents who would buy it as a spooky Halloween treat to multiple generations of metalheads who grew up listening to Black Sabbath and Ozzy.  I'm sure Sharon would sue me six ways from Sunday, so I'd either have to come up with some agreement to share the profits, or find a creative way to name and market the product without infringing on any trademarks or copyrights (hell, it worked for Baby Ruth).  I did end up spending time working for a candy company, but alas, I was not in a position to give candy asses or chocolate bats to the world.  However, Hershey has released a new Halloween candy that is as close to my Ozzy bar that I've found.  They're called Vampire Kisses. 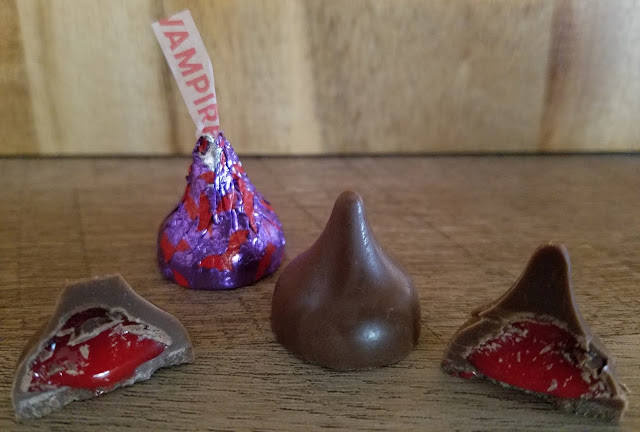 Actually, they're just called Hershey's Kisses and the flavor is Vampire, but how freakin' cool is it to call them Vampire Kisses!  That's the best name for a Halloween candy I've ever heard of.  And just look at that strawberry creme!  It is the perfect shade of blood red from a monster movie.  Put this cream inside of little chocolate bats and I guarantee that millions of people would spend Halloween biting off their heads and watching the blood filling drip down their chin.  It's a candy that's just begging to be produced in the age of Instagram.

The Vampire Kisses are very good.  You really can't beat Hershey's milk chocolate, and the strawberry creme is sweet and flavorful.  I hope this becomes an annual Halloween product.  It beats the hell out of candy corn.