The Short Life Of Norman Bigfish 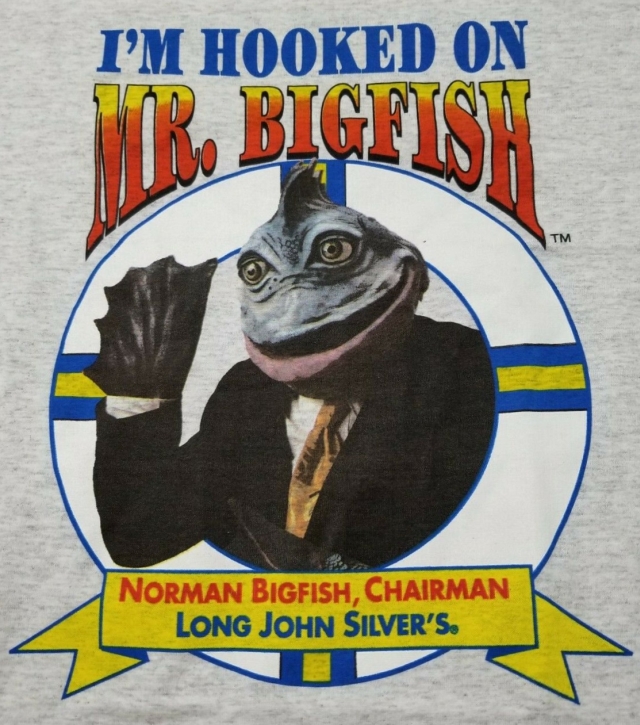 Mr. Norman Bigfish
Long John Silver's (1995)
It was a Christmas Eve tradition in my family to have a seafood dinner.  My grandmother tried to go the homemade route a few times in the early 2000's, but those times were the exception to the rule.  Most years, she would make her own crabcakes and shrimp cocktail, and the rest came from Long John Silver's.  This is why I've always associated Long John's with Christmas.  Even seeing their logo brings back memories of my grandmother's kitchen with the green tablecloth and all of the festive decorations.

For most of their history, Long John's didn't have a mascot like Ronald McDonald or the Burger King.  They had a few memorable ad campaigns, like "Go Fish", and their packaging sometimes had a pirate or nautical theme, but the focus of their commercials was usually on the food itself - tasty fish for a reasonable price.  They changed things up for a short time in early 1995 when they introduced a six foot tall fish in a business suit named Norman Bigfish.

The commercials showed Mr. Bigfish acting as the chairman of Long John Silver's in corporate meetings to discuss their upcoming specials.  He was also featured in print advertisement along with coupons for their new line of popcorn fish and chicken.
According to encyclopedia.com, the campaign was very poorly received.  Franchisees complained to the corporate office that the commercials with Norman caused a decrease in sales.  The media wasn't much kinder to the spokesfish.
Poor Norman didn't last until Christmas.  Long John Silver's flushed their fishy mascot down the commode before the end of summer.  Norman Bigfish may not be talked about as often as the other mascots of the 80's and 90's, but there are some of us who will never forget the short time when a giant fish in a three piece suit sold hush puppies to us.