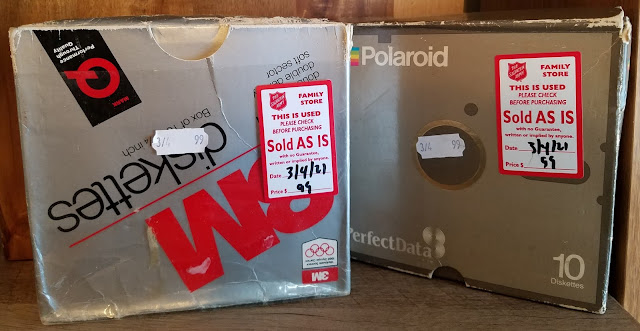 I found these at The Salvation Army yesterday for .99 cents each.  No computer in my house has a 5 ¼ floppy drive, but I've always wanted to buy cheap vintage parts and build a computer specifically for the purpose of playing vintage PC games on the original hardware.  Considering it would be made up of components that are decades out of date, I don't imagine it would be too expensive.  The real question is whether or not I have enough patience to see the project through to its end.
If I ever do, I'll have a pretty nice selection of 80's and early 90's games to start off with. 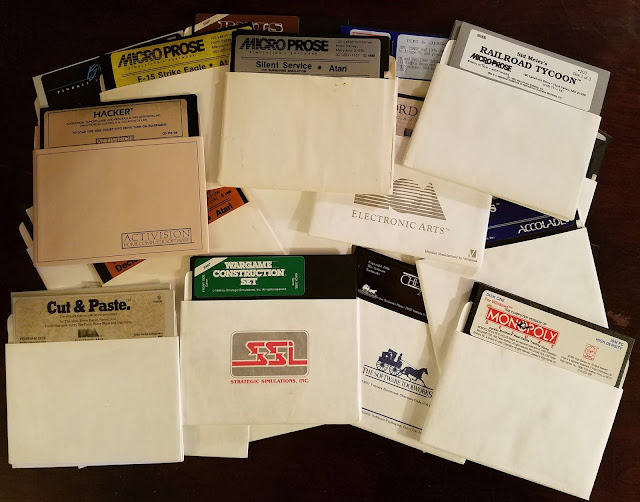 There's a pretty interesting mix of games here.  Some of them are games that I've heard of while others are completely unfamiliar to me, but I've taken photos of them all so that I could do some research and learn a little bit about each of them. 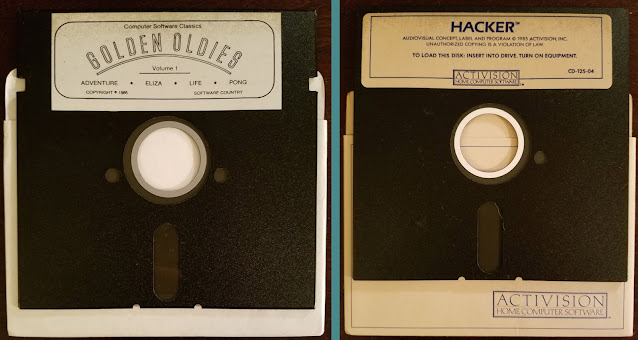 Golden Oldies Volume 1: an early classic game compilation disk that was published by Software Country in 1985.  It includes four games.  The first is Adventure, a text adventure from 1982.  Next is Eliza, a program that was originally designed in the late 60's to act as a simulation of a psychotherapist.  The third is Life, which I don't understand at all.  I've looked up the description on the back of the box, and I've watched a video of it being played, but I couldn't even begin to offer a guess as to what's going on.  The fourth game is Pong, which requires no explanation.
Hacker: this game was created by Steve Cartwright.  He is the programmer responsible for developing some of my favorite Activision games for the Atari 2600, including Megamania, Plaque Attack, Frostbite, and Seaquest.  It's been described as a very challenging adventure/puzzle game in which you play a hacker who has broken into the computers of an evil corporation that has plans for world domination. 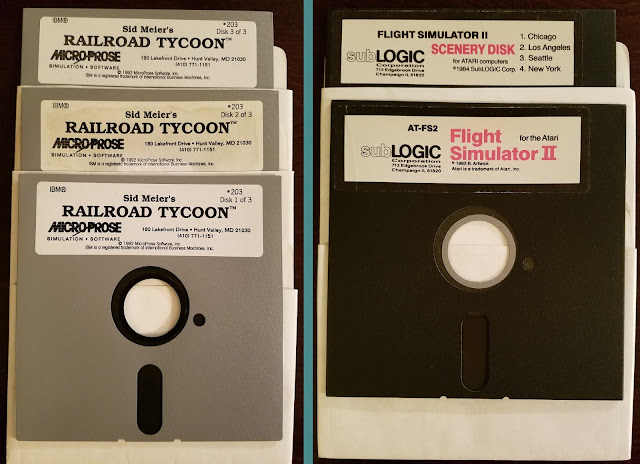 Railroad Tycoon: a business simulation game that was created by Sid Meier and released in 1990 - one year before the first game in his Civilization series.  The label has a copyright date of 1992.  I'm not sure if this means that this is an updated version, or if the IBM port took two years to come out.  Either way, the idea of the game to build and run a successful railroad while putting the competition out of business.
Sublogic Flight Simulator II: this was originally released in 1983 for the Apple II and is an early example of a flight simulator that used real-world scenery. 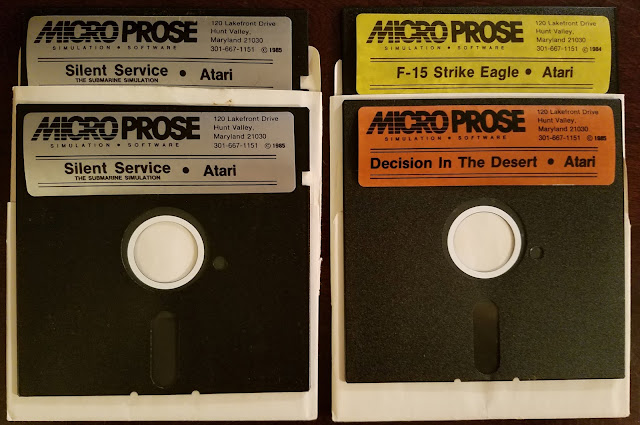 Silent Service: like Railroad Tycoon, this game was designed by Sid Meyer.  It's a World War II submarine simulation game that was originally released for the Commodore 64 in 1985.  This Atari version was released shortly afterward.  It was ported to the NES by Rare (released by Konami) in 1989.
F-15 Strike Eagle: another Sid Meyer game, this game was first released for Atari 8-bit computers in 1984 and continued to be ported to other platforms for nearly ten years.  The most recent ports came out for the NES in 1992 and for the Nintendo Game Boy and Sega Game Gear in 1993.
Decision In The Desert: this is such a great title for a game.  I'd like to believe that it's a game where an ordinary guy who happens to live in a desert climate goes through his life making everyday, mundane choices.  Coke or Pepsi?  Bus or subway?  Soup or sandwich?  The decision is yours!  Of course, it's yet another Sid Meyer war strategy game.  This time, it's focused around the battles that took place in North Africa during World War II.  The reviews I read for it were glowing, but these war simulators aren't my favorite type of game, so I can't imagine I'll spend a lot of time on any of these MicroProse games.

Bill Budge's Pinball Construction Set: unlike the previous five games I mentioned, this really is my type of game.  As the name suggests, this game allows you to use an editor to create and play your own pinball machines.  It also allowed you to save the pinball machines that you have created to a floppy disk and share them with your friends, who could then play it straight from the disk even if they didn't own a copy of the game that you used to build it, which is pretty awesome.  It was originally released for the Apple II in 1982 and was re-released for other computers throughout the 80's.  In 1993, Bill Budge created an updated version called Virtual Pinball for the Sega Genesis.
The Seven Cities Of Gold: this Electronic Arts game was released in 1984 on a number of operating systems, but this Atari one is the only full version that didn't have to make compromises for functionality.  It's an open world strategy game in which you play a 15th century Spanish conquistador who is searching for gold in the new world. 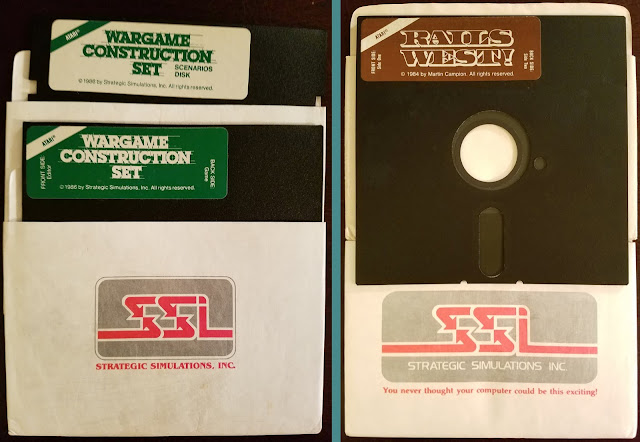 Wargame Construction Set: when I see the Strategic Simulations Inc logo, the first thing that I think of is Dungeons & Dragons.  The second thing I think of is how 99% of my knowledge of D&D comes from the Saturday morning cartoon series and the first season of Stranger Things.  That is to say that I've never played it and know almost nothing about it, but the reason I associate the SSI logo with it is because they created the official computer game versions of Dungeons & Dragons.  Wargame Construction Set has nothing whatsoever to do with D&D.  It's a game that allows you to create and play out war scenarios from various time periods in human history.
Rails West: this is an economic simulation game that was released by SSI in 1984.  As the name suggests, it's focused on the role played by the transcontinental railroads in the 19th century westward expansion in North America.  I wasn't able to find too much information on the history of this game, but there are YouTube videos that show it being played.  A quick search on eBay revealed that different versions were made for Atari, Apple II and Commodore 64.  The ones that are up there now have a pretty high asking price, but they all seem to be complete in box.  I have no idea if the floppy by itself is sought after, but since this isn't really the type of game I tend to enjoy, I might end up flipping this one. 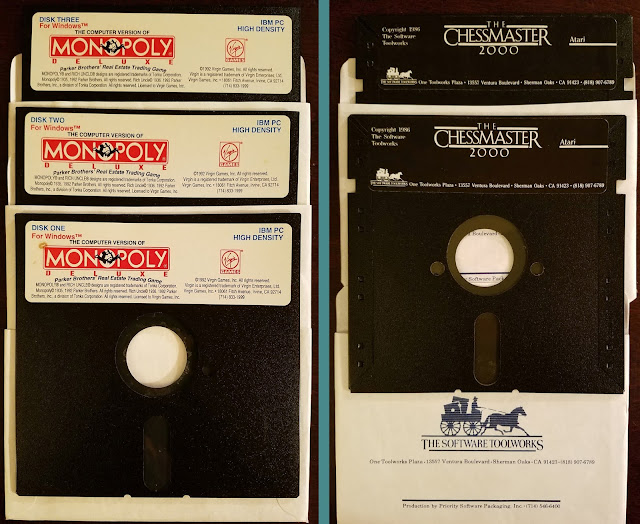 Monopoly Deluxe: I watched a playthrough of this 1992 release by Virgin Games and it looked very familiar.  The Monopoly game that I remember playing when I was a kid was the Sega Master System version, but after seeing this video, I'm pretty sure that I had the Windows version at some point in the 90's too.
The Chessmaster 2000: this is the first game in The Chessmaster series.  These games were produced over two decades, from 1986 to 2007, and it's easy to see why it was so popular for so many years.  If you enjoy relaxing with a nice game of chess, there is nothing here not to love. 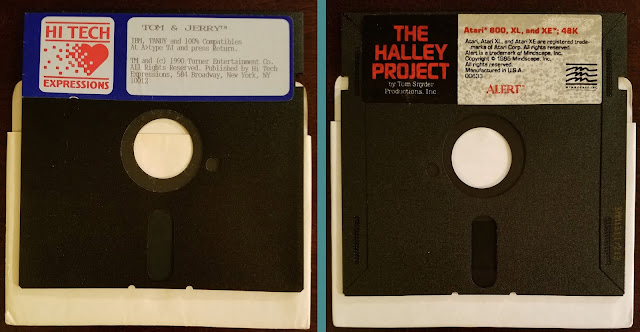 Tom & Jerry: there were a few different Tom & Jerry games that were developed around 1990, and I don't know for sure which one this is.  If I had to guess, I'd say that it's probably Tom & Jerry's Cat-astrophe, which was released by Hi-Tech Expressions, but it wasn't the only Tom & Jerry game they released, so I'd have to play it to be sure.
The Halley Project: you begin this game as a star pilot from a base on Halley's Comet who is tasked with a series of flight missions that take you to Earth and elsewhere in the universe.  I watched a video of the first mission, and I regret to say that I don't get it.  That's not to say it's a bad game.  It was very highly regarded in its time for being realistic and educational, and I will fully admit that I probably do not have the intelligence and/or attention span to fully appreciate its strengths.  One of these days, I'm going to try to do some research on how to play this game because it's the kind of thing that I want to understand. 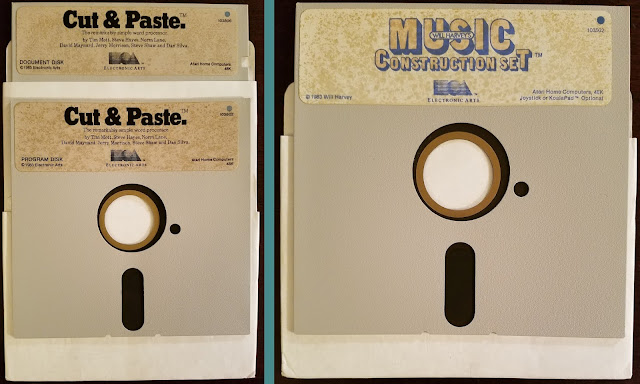 Cut & Paste: I never knew that EA had their own word processor program, but apparently they did.  It doesn't seem like it was very highly regarded when it was released back in 1984.  The consensus seems to be that it was overpriced and didn't have as many features as its less expensive competitors.
Music Construction Set: this was another piece of EA developed software, but unlike their word processor, this received rave reviews when it came out.  It was originally designed for the Apple II in 1983, but was ported for other systems soon afterward, including Atari computers. 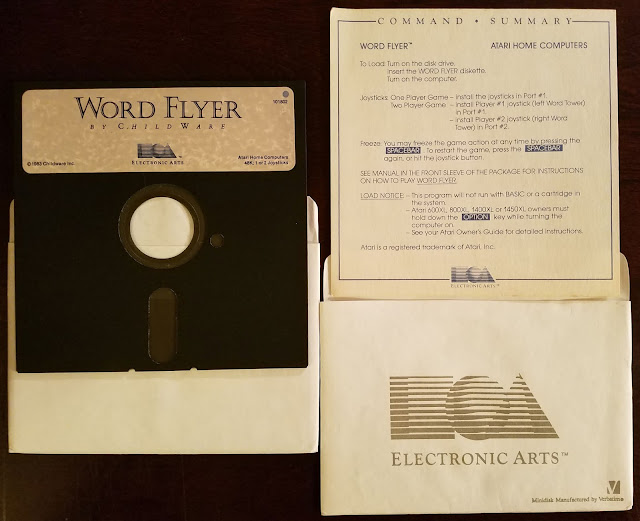 Word Flyer: I couldn't find too much about this one, but it seems like it was an educational game for children, along the same lines as Reader Rabbit. 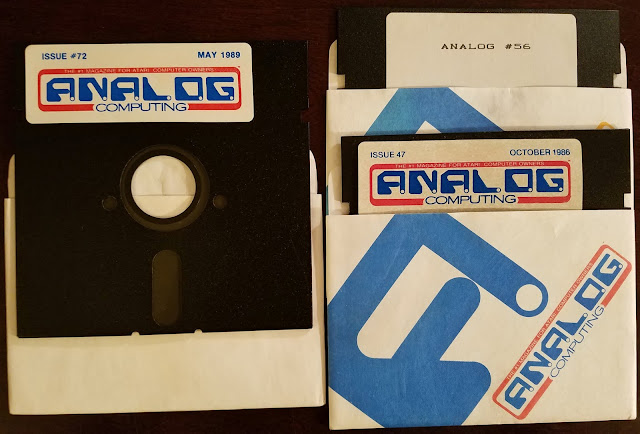 Analog Computing: there were three floppy disks from Analog Computing magazine from 1986 to 1989.  The word "Analog" stood for Atari Newsletter And Lots Of Games.  There's lots of information about the magazine online, but I couldn't find out too much about the disks 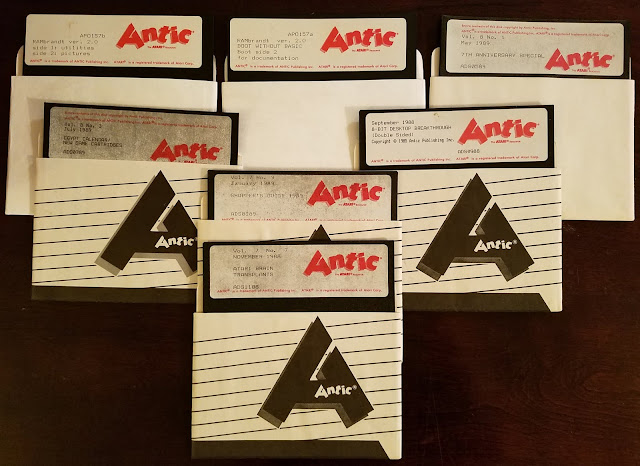 Antic Magazine: this was the main competitor to Analog Computing throughout the 80's.  These disks are from 1988 and 1989.  I'm not sure what's on any of them, but I am pretty interested to find out what an Atari Brain Transplant is.