The Most Annoying Type Of Lottery To Sell 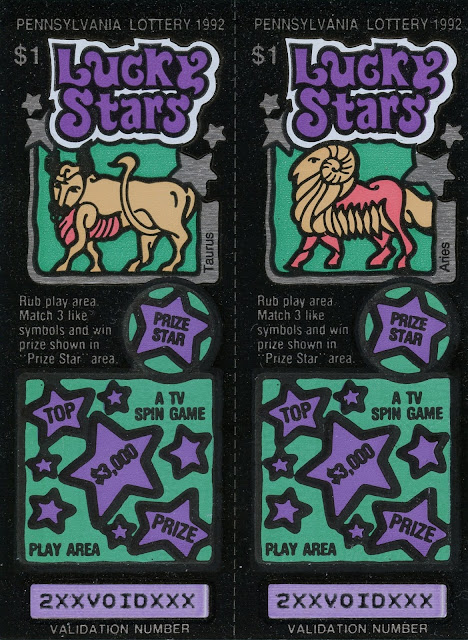 Lucky Stars
Pennsylvania Lottery (1992)
I used to hate this kind of ticket when I worked at the gas station.  It has nothing to do with the astrology aspect of them, which I think is actually pretty cool.  It's more the way that the tickets are sold.

If you've never worked at a place that sells lottery tickets, here's a brief rundown of how it works (or at least how it worked from the mid 90's through around 2005): First, you get a delivery of new tickets.  Each pack of tickets is shrink wrapped, and includes a special barcode that you scan into the PA Lottery Machine to "active" the pack (if you skip this step, a winning ticket from the pack cannot be redeemed).  Next, you load the little plastic ticket dispenser.  In most of the places I've worked, this is built into the counter near the cash register.  It's set up in such a way that the shoppers can look down through a clear plexiglass window and see which tickets are available for sale.

In most cases, all of the tickets in each pack have the same exact appearance, other than the number that identifies the number of the ticket.  Every so often, a customer comes along who swears that there's a "trick" to it and will only buy tickets if they have a low number, or a high number, or a little bar printed somewhere near the number.  This is all in their heads, of course.  I've watched people scratch these things off for decades and I can assure you that there's no secret "trick" to hitting the jackpot.  However, the fact that we have to sell them in sequential order

In some cases, the same ticket can have several different designs, such as these Lucky Stars tickets.  There's still 300 tickets in the pack, but in this case, there are 12 different designs - one for each astrological sign.  Here's the problem - the one that people see through the little plexiglass window in the counter is further into the pack, and is different from the next one in line that can be torn off and sold.  So, Suzie Customer sees the Sagittarius design and asks for the Lucky Stars ticket.  You tear off the ticket and sell it to her, and she grouchily waives the Taurus ticket in the air while telling you that you gave her the wrong one.

This puts you, the cashier, in quite a pickle.  Do you try to explain the cliff notes version of what you just read in the hopes that she's sensible and accepts the ticket you sold to her, or do you break the rules and pull out the next seven tickets, give her the Sagittarius one, and then hope that you can sell the rest of them before the end of your shift?  Keep in mind, if you make an exception to the rule once, you'll probably be asked to make it every day, since most of your customers are "regulars" who pop in for their morning coffee every day, and if you don't make an exception, you run the risk of a screaming imbecile on the other side of the counter berating you for being too stupid to honor a simple request?  Oh yeah, you'll be dealing with this exact scenario at least five or six times a day - probably over a dozen times on a busy day, so if you choose to do the right thing and explain why you have to sell the next ticket in the pack, which might not necessarily be the one the customer saw in the window, you're going to have to use your best fake-nice voice and pretend that you haven't had this same exact conversation 50 times before this silly Sagittarius strolled on over to the counter.

It's been 16 years since I worked at a gas station and I can feel the suppressed rage bubbling up like it was yesterday.  So, yeah, these tickets are pretty cool, but what a pain in the ass they are to sell.