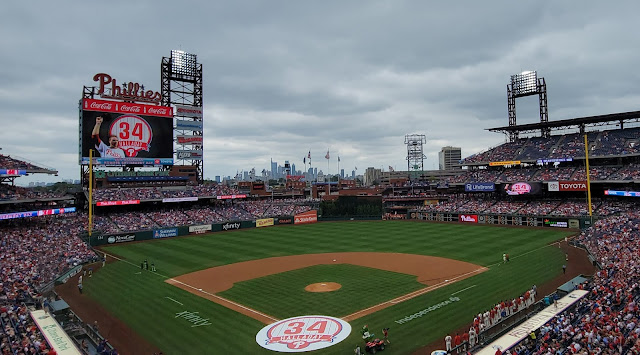 Sunday, August 8, 2021
New York Mets @ Philadelphia Phillies
Citizens Bank Park - Philadelphia, PA
Pitching: Taijuan Walker vs. Zack Wheeler
Results: Phillies defeated Mets, 3-0
When the trade deadline passed, I wasn't exactly optimistic about the Phillies chances in 2021.  It's not that I thought they made a bad trade.  Frankly, I think they traded Spencer Howard at exactly the right time - when we saw enough of him to doubt his chances to make it in the big leagues, but early enough that other teams could still be enticed by his prospect status.  They got an All-Star pitcher who's under team control for another year, a veteran closer who's been having a great year, and a prospect who may end up contributing more at the big league level than Howard.  They also brought Freddy Galvis back to Philadelphia, which is another move I was very happy about.  However, I felt that the team had too many holes and that there wasn't enough that could realistically be done that would turn things around.
The first two games after the trade deadline reinforced my doubts.  They lost the first two games of a three game series against the last place Pittsburgh Pirates on July 30th and 31st.  In fact, on trade deadline day, they only got one hit and lost 7-0 to one of the worst teams in baseball.  Since that time, I am extremely happy to say that they have been proving me wrong.  The Phillies entered this game undefeated in the month of August after winning the last game against the Pirates, then sweeping the Washington Nationals on the road, and finally returning to Philadelphia to take the first two games in their current series against the Mets to overtake them for first place in the NL East.  Today, the Phillies are going for their 8th consecutive win and their second straight sweep of a division rival.  But before I get to the game, I need to talk about what happened before the first pitch when the Phillies bestowed their highest honor on one of the greatest pitchers to ever wear their uniform. 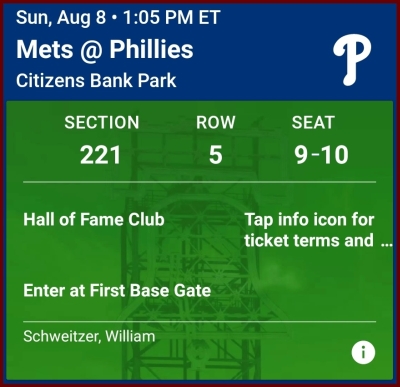 Following the 2019 season, the Phillies announced that they would be retiring #34 in honor of Roy Halladay in a ceremony that was scheduled to take place exactly ten years after his perfect game against the Florida Marlins.  Roy is one of my favorite pitchers of all time, so I ordered tickets as soon as they became available.  Then the pandemic happened.  The game was cancelled, and the ceremony was postponed to a date that would be determined later. 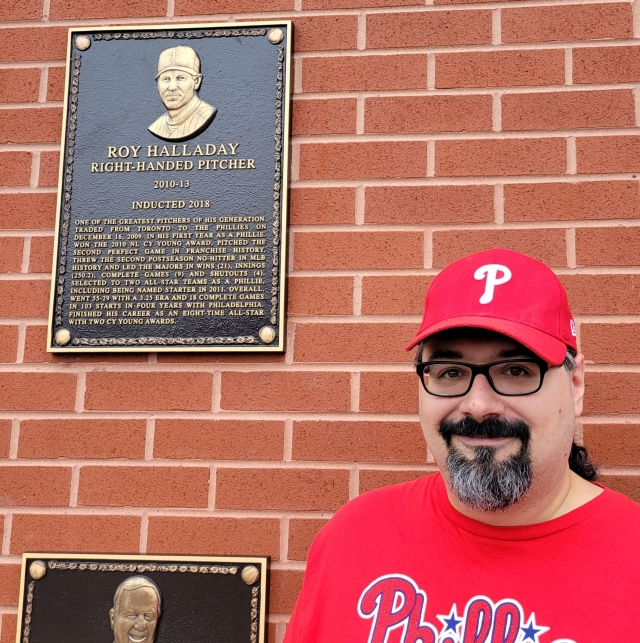 Typically, tickets to MLB games go on sale in stages.  Folks who are buying season tickets have the first shot.  Next are the fans who buy partial season tickets, like the Sunday package, or a six pack of games.  I used to get the six pack when I was in college, but the price of gas, tolls, parking and food has skyrocketed since then, so I've cut back to a few games per year, which means I have to wait to buy them when the single game tickets go on sale.  Usually, I'll get tickets to all of the games I want to go to for the season right then, so you don't really know what the circumstances will be by the time that game comes around.  I bought tickets to this game because it was on Sunday, it had a 1:05 start time (which meant I'd get home in plenty of time to walk the dog before it gets dark), and because it was against our division rival Mets.  I had no idea at the time that the Phillies would overtake the Mets for first place in the NL East in this series, and I didn't know that the Roy Halladay number retirement ceremony would be rescheduled for this date.  That wasn't announced until a little over a month ago.  So, by sheer dumb luck, I was able to be in attendance for the celebration that was cancelled in 2020.

The ceremony was awesome.  Unfortunately, Roy's wife and children were unable to be in attendance due to Covid-19, but there were a lot of his former teammates and coaches in attendance.  Phillies PA announcer Dan Baker served as the MC.  He first acknowledged the men who played alongside Roy during his Phillies career who are still an active member of the Phillies or Mets organization, including Juan Castro, Freddy Galvis and Brian Schneider.  Freddy got an especially good ovation from the crowd, which was great to see.
Next, they introduced some of Roy's former teammates and coaches who aren't active as players or coaches.  First was Kevin Frandsen, who is on the Phillies radio broadcast team on WIP.  After that, everyone who was introduced had flown in to Philadelphia specifically for this weekend and to honor Roy Halladay, including Raul Ibanez, Kyle Kendrick, Ryan Howard, Jimmy Rollins, Carlos Ruiz, Ruben Amaro Jr, Rich Dubee and Charlie Manuel.  There was also a special appearance by one of the few pitchers who have succeeded in Philadelphia at the level of Roy Halladay - fellow Hall of Famer Steve Carlton.
Dan Baker introduced Raul Ibanez, who gave a very nice speech about Roy, and he introduced a few video packages with prerecorded messages, both from players in attendance and others who were not, including Cole Hamels and Roy Oswalt.  John Middleton and Carlos Ruiz were shown on Phantavision to reveal the #34 statue (next to Dick Allen's statue), and Steve Carlton revealed the painting on the brick wall above Ashburn Alley of Roy Halladay's #34, right between Carlton's own #32 and Hall of Famer Robin Roberts #36.  It was a fitting tribute to one of the greatest Phillies, and one of the greatest pitchers of all time.. 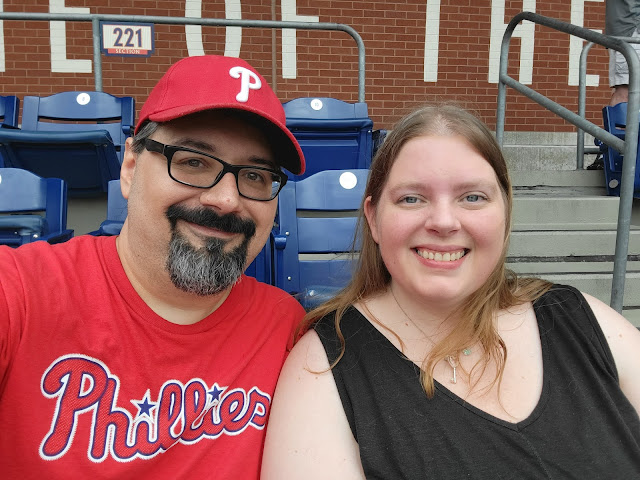 It was an absolutely beautiful day at the ballpark.  The sky was cloudy when the number retirement celebration began, but he picture at the top of this post makes it look much worse than it was because there was no threat of rain at all.  It was very pleasant and warm with the clouds keeping the sun from beating down on the field.  The sky cleared up around the 4th inning.  Our seats were behind home plate and in the shade, so even though it was a warm August day, the heat never felt oppressive at any point. 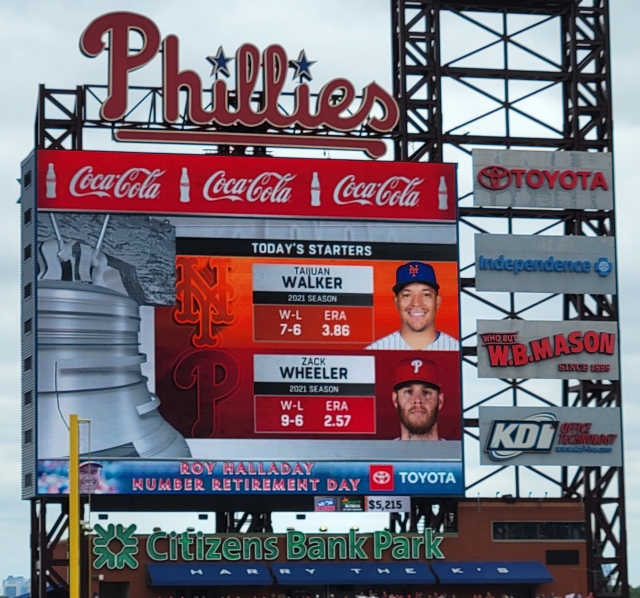 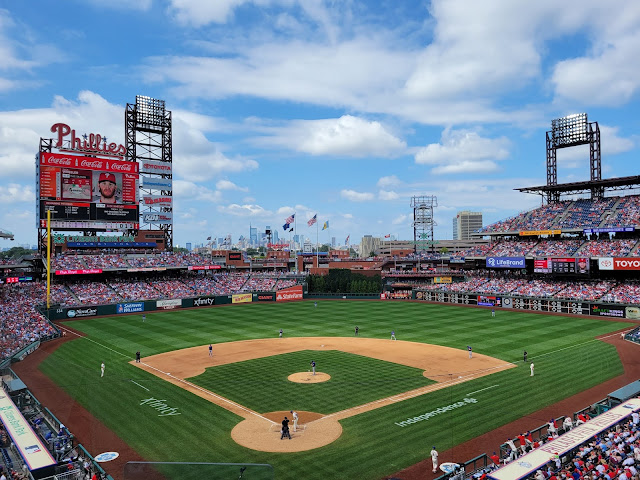 This was also the first time I felt the electricity of a pennant chase in the ballpark for the past ten seasons.  The attendance was 39,186.  Everybody was keyed up for the Phillies to complete the sweep and lengthen their lead on our hated rivals, and Zack Wheeler did not disappoint.  He gave up a leadoff double to Brandon Nimmo.  Nimmo got his second hit of the game with a one out single in the top of the 9th.  Those were the only hits that Wheeler allowed all day.  In fact, the Mets only had one other baserunner when Michael Conforto drew the oppositions only walk in the eighth inning.  That was it.  In a performance that would have made Roy Halladay proud, Wheeler pitched a complete game, 2-hit shutout against his former team, giving up just one walk to 11 strikeouts.  Wheeler got a huge ovation from the crowd when he came up to bat in the 8th inning - a clear indication that he was going the distance.  He was absolutely dominant as he continued to make a strong case for himself for the Cy Young Award.
Despite pretty good pitching from Mets starter Taijuan Walker, the Phillies offense did their part.  Jean Segura and JT Realmuto each hit a solo home run in the bottom of the 1st to give the Phillies an early 2-0 lead.  Bryce Harper, who came out to chants of "MVP" from the fans in each at bat, hit his 20th homer of the season in the bottom of the 6th to extend the Phillies lead to 3-0.  It would end up being more than enough for the Phillies to win their 8th straight and complete their second consecutive sweep of a division rival. 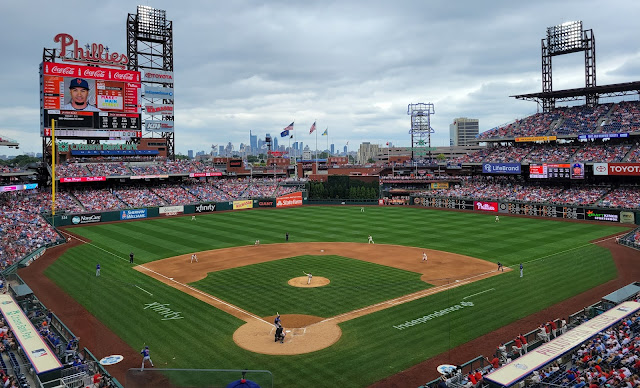 The Mets got some more bad news in the top of the 5th.  Newcomer Javy Baez grounded out to lead off the inning, but he didn't run to first base.  This is unlike him.  He doesn't have the greatest plate discipline so he struck out a lot in his career with the Cubs, but he always had a reputation for being a guy who hustles.  As it turned out, he had tightness in his hip and was in pain.  He was replaced in the lineup by JD Davis when the Mets took the field in the bottom half of the inning (Davis was put in at 3B while former Phillie Jonathan Villar moved over to shortstop). 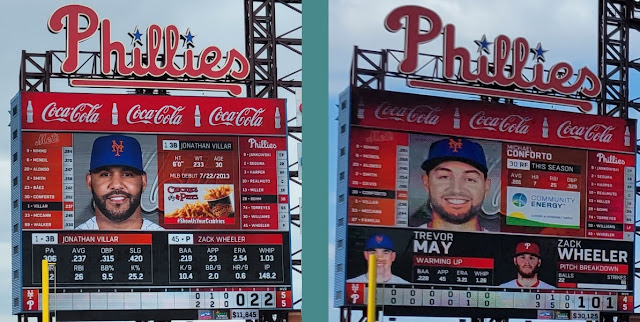 Jonathan Villar was one of two former Phillies that appeared for the Mets in today's game.  He was once a prospect in the Phillies system who was traded to the Houston Astros prior to the start of the 2011 season for Roy Oswalt.  The second ex-Phillie was another prospect that was dealt away in a trade.  Relief pitcher Trevor May was the Phillies top pitching prospect in 2011 and 2012.  In a trade that really didn't work out too much for either team, he and Vance Worley were traded to the Minnesota Twins for center fielder Ben Revere prior to the 2013 season. 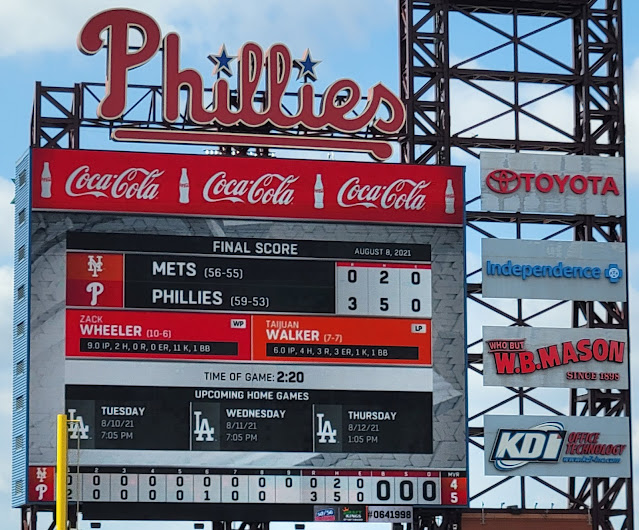 So, the Phillies are now 59-53 - first place in the NL East.  They're two games ahead of the Braves after knocking the Mets down to third place at 2.5 games back, and they're riding an 8 game winning streak for the first time since 2011.  The Phillies finally have a day off tomorrow after playing in 20 games straight.  On Tuesday, the Dodgers come to town for a three game series, followed by a three game series with the Reds.  Dad and I have tickets to next Sunday's game.  Hopefully the Fightins will still have a comfortable lead in the division by this time next week.