It Was A Graveyard Smash 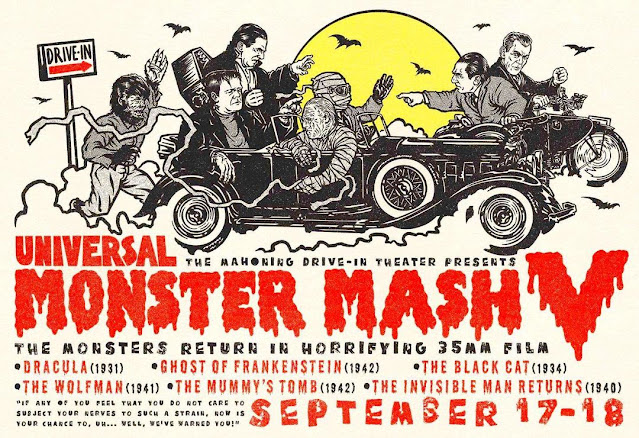 Universal Monster Mash V
Mahoning Drive-In - Lehighton, PA
This Friday and Saturday are all about the classics, as illustrated by the incredible show poster created by artist Tom Bifulco.  The Mahoning Drive-In Theater is hosting their annual Monster Mash event, featuring six classic Universal monster movies from the 30's and 40's projected onto that massive screen from 35mm. 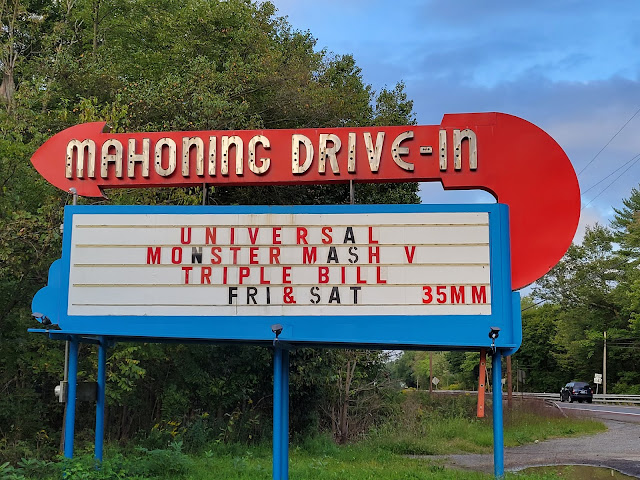 One of these days, I have to sit down and count how many photos I've taken of the Mahoning sign in 2021.  It's got to be over twenty at this point.  It's become a beacon of happiness.  Once I see the sign, I know I'm in for a great night. 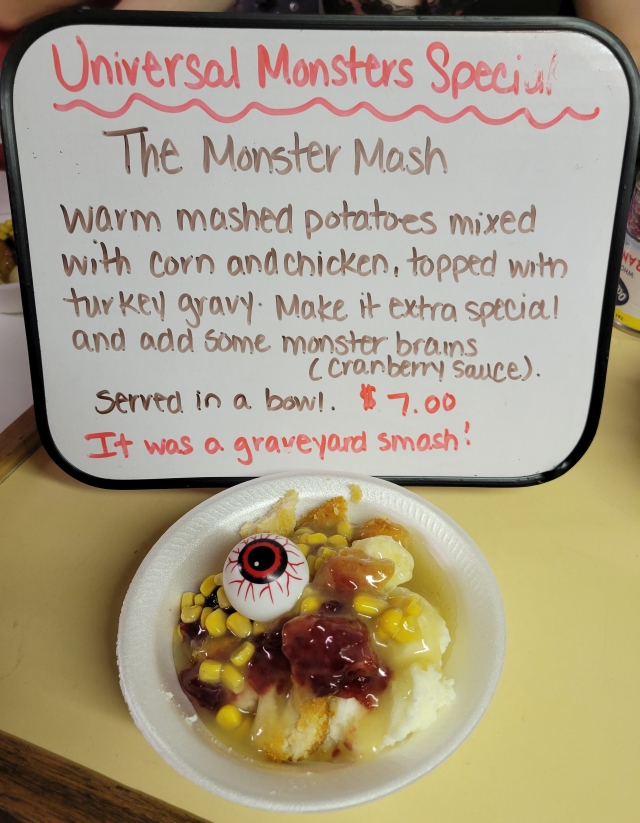 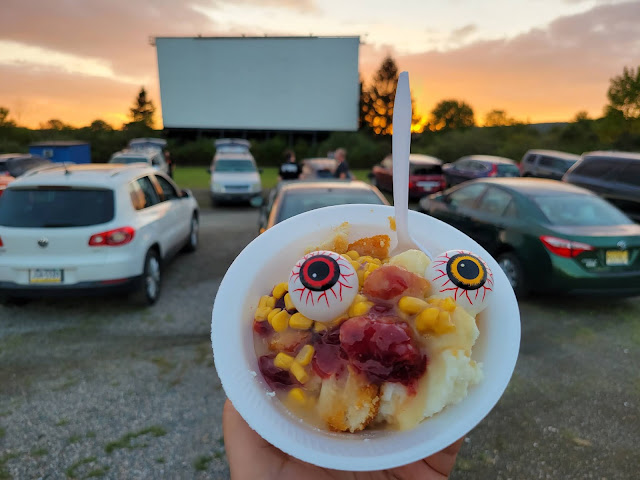 One of my favorite parts of the Mahoning Drive-In experience is the food.  I look forward to seeing and trying the crazy themed specials as much as I look forward to meeting the special guests signing or taking photos with the displays.
The special menu item for Monster Mash V was The Monster Mash.  It's kind of a KFC bowl, with a base of mashed potatoes topped with chicken, corn, cranberry sauce (aka: monster brains) and turkey gravy.  After they finished prepping the meal - plop - in goes a plastic eyeball to complete the look of a mashed up monster in a bowl.  This is exactly what I'm talking about when I rave about the Mahoning.  Everybody there finds a way to make everything more fun, and all for the sheer joy of the drive-in experience. 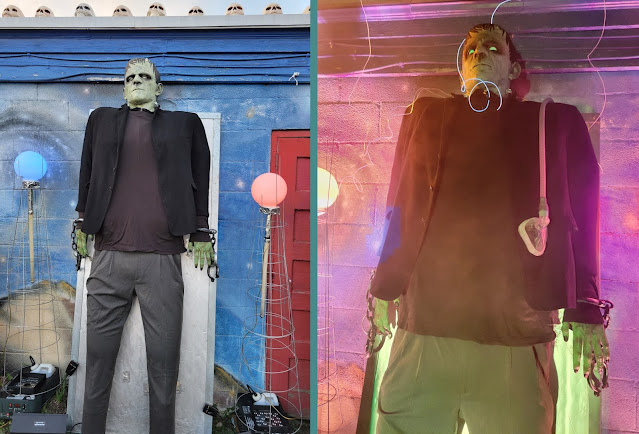 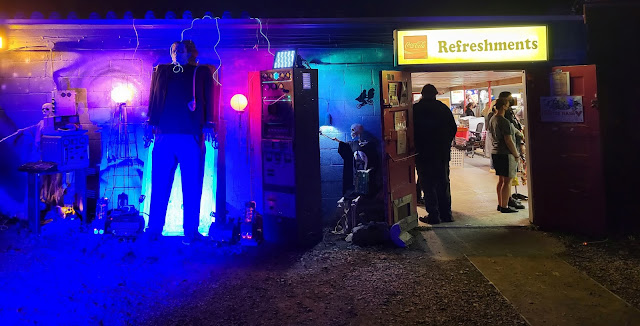 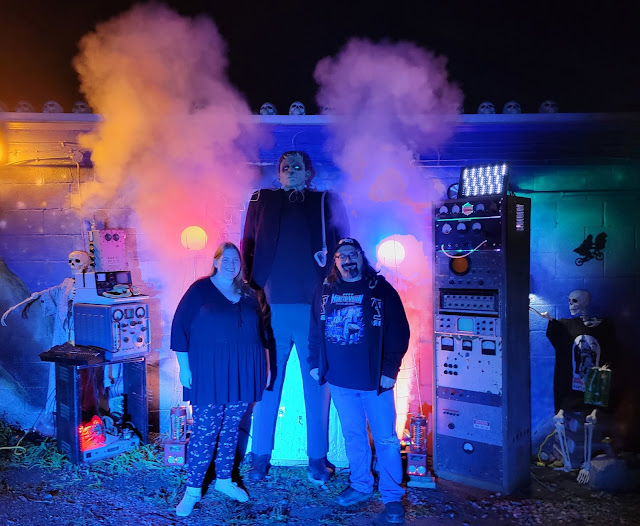 Outside of the concession building, there was a massive Dr. Frankenstein's Laboratory display set up, complete with steam rising out from the machines on both sides of Frankenstein's Monster.  A picture doesn't do it justice.  Check it out:
Seriously, how awesome is that!  I was talking to the dude who put this all together and he told me that he has this set up at his home all year long. 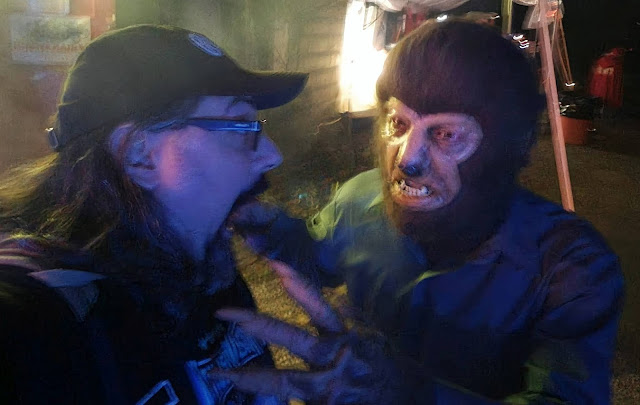 There were also folks wandering around the lot in full costume, including The Wolf Man and The Mummy. 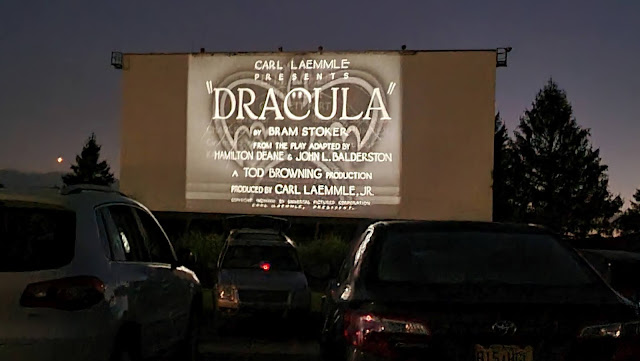 The first movie of the night was the original 1931 Dracula directed by Tod Browning.  This was the first movie with sound to be adapted from the original 1897 Bram Stoker novel.
Before I even talk about the movie itself, I'd like to point out some things that were incredibly fascinating to me about this experience.  It's been 90 years since this movie was first screened in theaters.  It was made 34 years after Dracula was published as a novel.  This movie doesn't just come from another time - it comes from another world.  When it was first shown in theaters, the United States was in the middle of The Great Depression.  It screened eights years before the start of World War II and 38 years before the Moon Landing.  It was the year that Thomas Edison died and William Shatner and Willie Mays were born.  Herbert Hoover was president of the United States.  Joseph Stalin was in charge of the Soviet Union.  Hitler hadn't taken charge in Germany yet.  In fact, he was being prosecuted for complicity in manslaughter committed by members of the Sturmabteilung at the Tanzpalast Eden, and if that reminds you a bit of Donald Trump and the January 6th insurrection attempt in Washington DC, you're not alone.  Sitting under the stars at the Mahoning and looking up at a screen to watch a movie that was first watched in 1931 is a magical experience in and of itself, but it's even more special when you consider what movie your watching.  This isn't any old horror flick.  This is Dracula, and it's not any old adaptation of Dracula.  This is THE Dracula!  I mean, holy shit!
As you can see, I like to take a photo of the title screen of the movies that I see at the drive-in.  I just think it makes a cool picture and helps preserve the memory of a fun night that I truly feel so lucky to have the opportunity to experience.  I almost missed getting the picture of the title screen of Dracula, because as soon as that haunting music began at the opening of the film, the feelings I expressed in the previous paragraph flooded my mind.  For the first five minutes of the film, all I could do is sit there and soak it in. 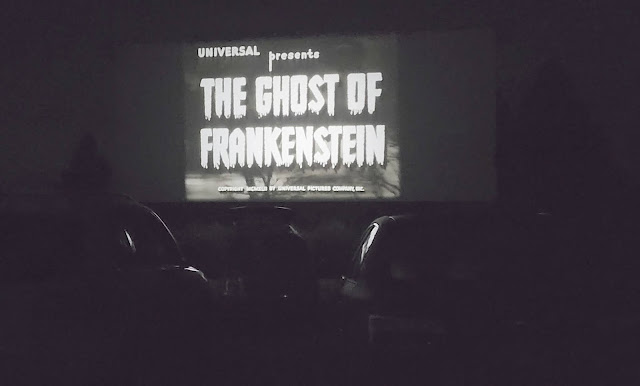 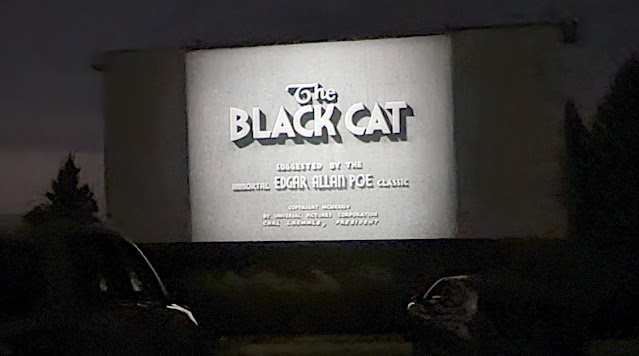 The third and final film of the night was The Black Cat from 1934, which features Boris Karloff and Bela Lugosi co-starring together for the first time in their careers.  Before the film, the DJ mentioned that this was her favorite of the classic Universal monster films.  It's definitely a horror film, but I wouldn't call it a monster film.  It's more of a psychological horror flick, like Rosemary's Baby or The Omen.  The title is a little misleading as well because the plot really has nothing to do with a black cat.  There are black cats in the movie, and Dr. Werdegast (Lugosi) is afraid of cats, but neither of these things play a role in the story at all - not even as a red herring.  Still, it's an incredible horror film that was decades ahead of its time, and a perfect end to another wonderful night at the drive-in.