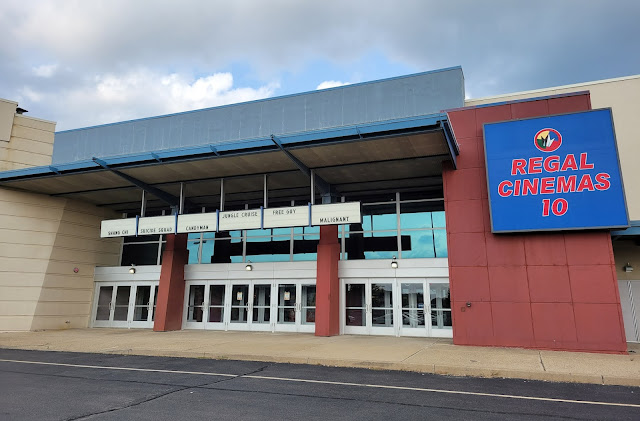 Shang-Chi and the Legend of the Ten Rings / Malignant
Regal Cinemas - Hazleton, PA
This blog was never intended to have movies as its main focus, but they've played such a huge role in my life since the pandemic began that I find myself writing about them a lot more than I ever used to.  I've always loved movies (who doesn't), but I wouldn't call myself a cinephile, and I'm about the furthest thing from an expert as you can get.  I'm sure that if the folks who I met at the Mahoning Drive-In were to read what I have to say, it would come across like a caveman giving a restaurant review (chicken good!), but it is what it is.
Although the drive-in tends to be the main thing I write about, we still go to see new theatrical releases at Regal with their Unlimited Pass.  We signed up for it in 2019 before the pandemic, and the terms and conditions are set up in such a way that you can't cancel your plan until you've been signed up for one year.  Because the theaters have opened and closed several times throughout the pandemic, we just fulfilled our one-year requirement this month, but I have no intention of cancelling.  It's a fantastic service, and it has given me the opportunity to see a lot of movies that I wouldn't ordinarily have gone to see.  More often than not, I've been pleasantly surprised, but even the movies that weren't so great aren't a big deal  You don't feel like you've wasted your money on a ticket when you can go see as many movies as you want for one price.
Because we've been back to Regal so many times over the past two years, I've become very familiar with the Dr. X-Plore commercial that they show at the end of the trailers.  I love this guy!  I'd totally go see a movie starring this character.

"I see them all, and I even enjoy animated musicals"
- Dr. X-Plore 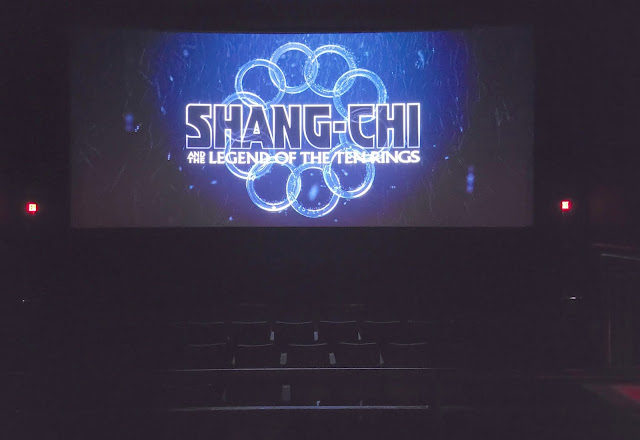 Before seeing the trailer for this film, I had never heard of Shang-Chi.  I mean no disrespect to the comic or its creators with this statement.  Frankly, if it weren't for the Black Sabbath song, I would have said the same thing about Iron Man before seeing the first movie in that franchise.  Comic books have never been my thing.  I tried to get into them when I was a kid, but it just didn't take.  I found myself more interested in the artwork used in the advertisements for candy and video games than I did the superheroes and their adventures.  I'm weird like that.
Despite lacking an interest in the source material, I've found that I enjoy a lot of the comic book movies that I've seen.  I don't get all hyped up for it like a lot of others seem to get, and I definitely don't pick up on any of the easter eggs or elements of foreshadowing that the directors like to include, but I'm also not disappointed if they stay from the source material because I'm going in with a blank slate.  It's all new to me.
With this in mind, I enjoyed Shang-Chi a lot, but it felt to me more like a kung fu comedy flick than a comic book.  The end felt a bit like I was watching someone's live stream of a boss battle from a Playstation game, but it didn't take away from my enjoyment of the film.  The acting was good, the story was solid, and it had a lot of funny moments. 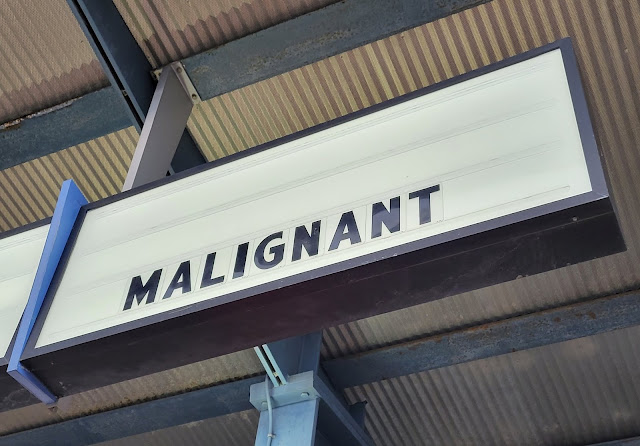 My memory is pretty lousy, and judging by how often my father and grandfather would repeat the same story multiple times as they got older, I'm expecting it's going to get worse from here.  That's one of the major motivators I've had in keeping up with this blog all these years; I don't want to forget all of the people I've met and things I've seen.  I sort of have it in my head that I'm going to be in a nursing home or a hospital bed one day, hopefully in the distant future, and scroll through the blog while shouting "oh hell, I remember that!" to an empty room.  Anyway, there's been more than a few occasions this year when I'd see a trailer, turn to my wife and say "that looks good", and then forget about it entirely.  This is one of those times.  I have no doubt in my mind that my wife is right - I saw the trailer for Malignant and I said that we should go see it when it comes out.  Maybe it would spark a memory if I saw the same trailer again, but even after seeing the full movie, I have no memory at all of seeing the preview -   zero.
Malignant is the very definition of a movie that is so terrible that it's awesome.  Some of the acting and lines of dialogue we so cheesy that I burst out laughing in the theater, but that's what made it such an enjoyable flick.  I don't want to spoil the plot any more than the title of the film does, but if I were going to describe it in a single sentence, I'd say that it is Basket Case with a bigger budget and better music.  I could definitely see this being featured by Joe Bob and Darcy on The Last Drive-In because it's exactly the kind of movie that they show - a blood-soaked fever dream that you will love, as long as you don't try to take it too seriously.
I'm kind of like Linus in the pumpkin patch when it comes to movies such as this - I appreciate sincerity.  I enjoy the occasional Troma film, but I wouldn't call myself a super fan of the studio because it's obvious that they're going out of their way to make a bad movie, and it makes me feel like the kid in Liar Liar when his mom's boyfriend tries to do The Claw.  The difference between Troma and movies like Malignant is that the people who made the latter tried to make a good movie, or at least they're did a better job of hiding the fact that they're tried to make a bad one.  The debate that's currently raging on Twitter is whether or not it's a Giallo film.  I've heard Joe Bob use that term before, but I'm still not super clear on what that means.  Thankfully, my friend Tyler was there to help me out: 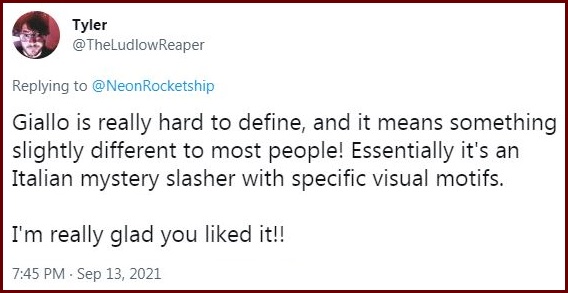 Well, people definitely get slashed, and I guess you could call it a mystery, but the closest thing this gets to Italian is if they served stromboli on the set.  I won't weight in on whether it's a Giallo, or inspired by Giallo, or something altogether different, but I will say that it's a very enjoyable film with excellent writing and a terrible script that makes it that much better.  I highly recommend it.