The Weird World Of Tim Burton 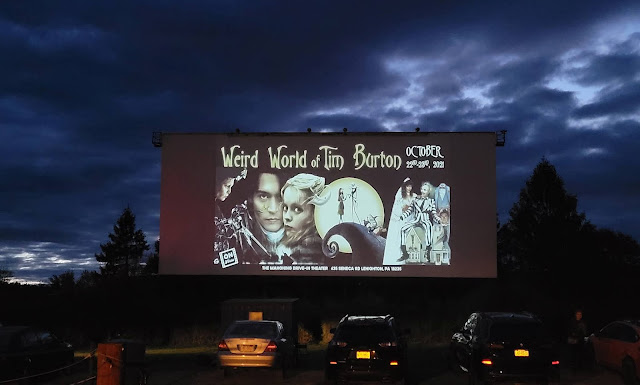 The Weird World Of Tim Burton
Mahoning Drive-In Theater - Lehighton, PA
The second to last weekend of the 2021 season was definitely one to remember, filled with fun surprises, trailers and four incredible full length feature films that showcase the creative brilliance of Tim Burton.

The double feature on Friday evening were made up of a couple of classic films from the 90's.  It began with a movie that kicked off the decade in style - the 1990 surreal love story Edward Scissorhands,  starring Johnny Depp and Winona Ryder.  The second film showcased the end of the decade with Tim Burton's 1999 imagining of Sleepy Hollow, starring Johnny Depp and Christina Ricci.  This movie served as a bit of foreshadowing for next Friday's double feature, which is centered around Ms. Ricci's films from earlier in the decade.
Saturday night's movies began with a movie that is nothing short of a masterpiece; the 1993 Halloween and Christmas stop-motion animated film, The Nightmare Before Christmas.  The second feature was a movie that I had seen parts of throughout my life, but never actually sat down to watch the whole thing - the 1988 horror comedy classic, Beetlejuice, starring Michael Keaton and Winona Ryder. 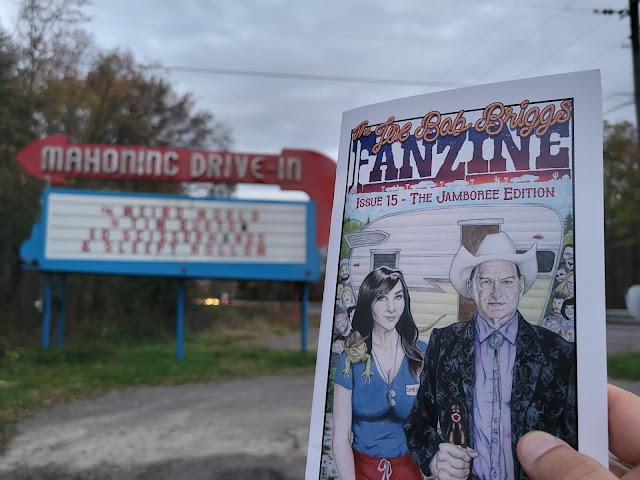 Before we left for the drive-in, I received some pre-show reading material in the mail with the latest issue of The Joe Bob Briggs Fanzine.  If you're a fan of Joe Bob Briggs and The Last Drive-In, this is something you really should check out.  The most recent issue covers Joe Bob's Jamboree, and there's no better place to read it than on the grounds where it all happened.  Pick up your own copy from Patty Jack Press. 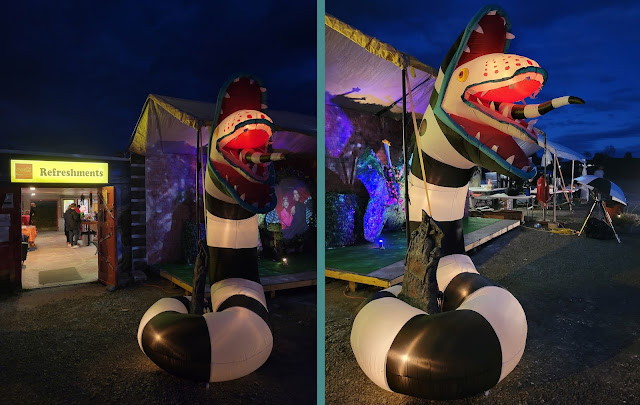 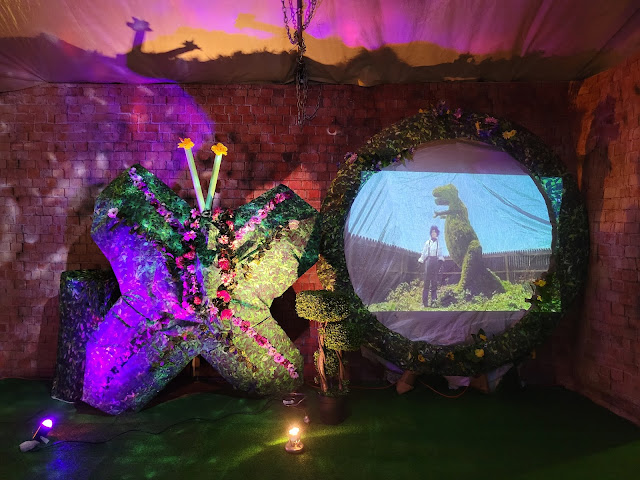 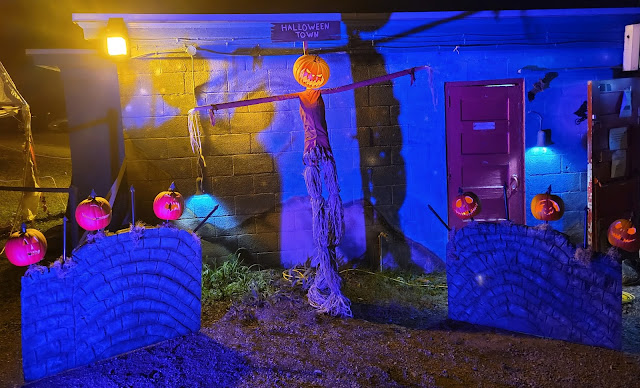 The photo ops were outstanding, as always.  There was a giant sandworm from Beetlejuice to the right of the entrance of the concession building.  Behind it, and in between the concession entrance and the merch table, there was a scene with topiaries from Edward Scissorhands, with a projector showing clips of Tim Burton movies.  On Saturday night, Steve Mills added his incredible Pumpkin King lighted display, which cast a very cool shadow on the building.  I bumped into him when we were both waiting in line for food and he showed me some of the photos of the different stages of this display being put together.  The talent and dedication, and the amount of work that goes into these displays is simply fantastic, and they add so much to the atmosphere of the weekend. 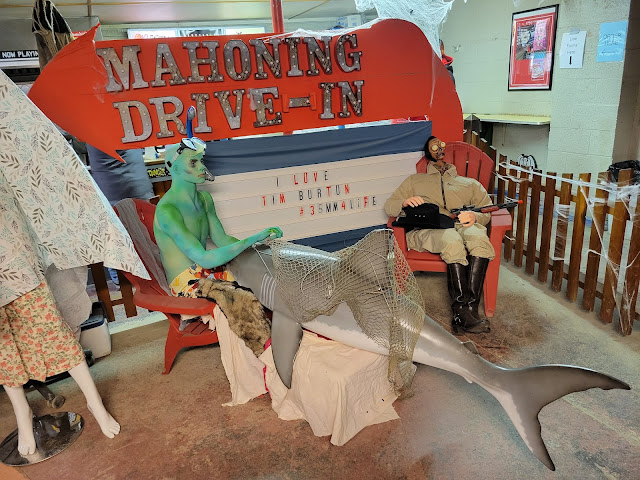 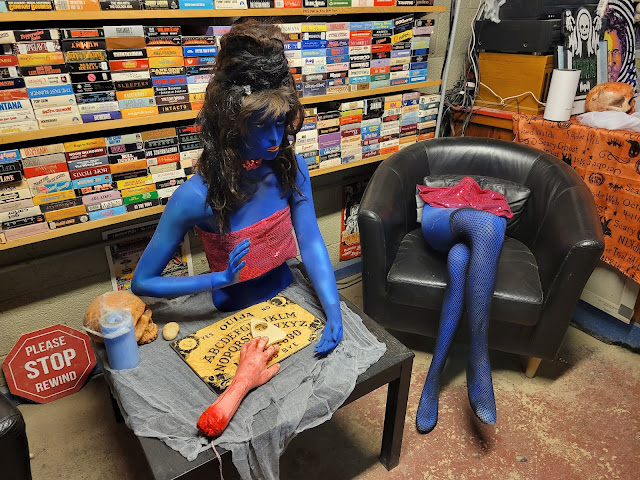 The seating areas inside the concession building were decorated to look like the afterlife waiting room from Beetlejuice, and they absolutely nailed it!  I wish I would have taken more pictures of the decorations and the many cosplays that my fellow moviegoers had put together, including an adorable puppy that was dressed up like Beetlejuice. 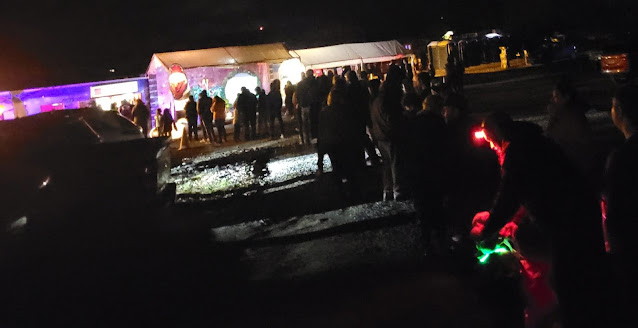 If you have popped onto my blog at any point this year, you'll know that I've been a pretty frequent visitor to the Mahoning Drive-In Theater.  I have never seen the place so busy for a double feature as it was on Saturday.  We're talking VHS Fest and Joe Bob Jamboree sized crowds here.  The line at the concession stand stretched outside of the building, through the parking lot, roughly halfway to the entrance.  Usually, the building starts to empty out when the trailer reel begins because everyone wants to be at their car to watch the movie, but the staff told me that they were serving food nonstop through the first feature.  They couldn't even tell when the intermission began because the line never stopped.  And keep in mind, this was just for food!  The merch tent has an entirely separate line!
It's great to see that so many people are discovering this amazing place.  Much respect to the staff who works the concession stand.  Those folks bust their ass while everyone else is out having fun. 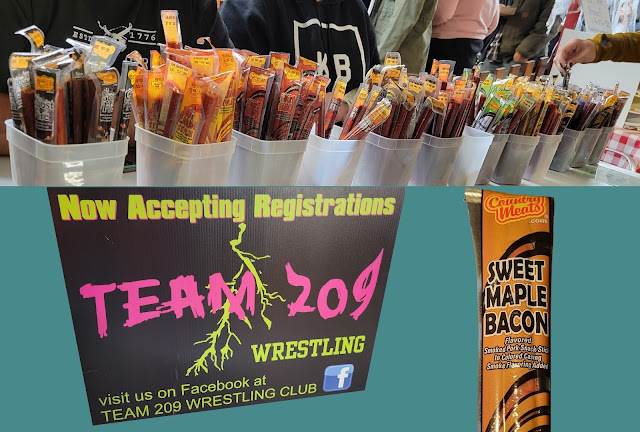 There were some special guests in the concession stand who were selling meat sticks to raise money for the Team 209 Wrestling Club out of Lehighton, Palmerton, and Jim Thorpe.  They were only a dollar each, and they had a pretty big selection of flavors, so I got a bunch of 'em.  I fully intended to do a taste on here, but they were so good that I ate all but one of them during the movies.  However, I can do a review of the Sweet Maple Bacon one.  It's good.  It's very, very good!  The rest of them were good too, but since I scarfed them down in a dark car, I couldn't tell you which flavor is which, but I can say that I enjoyed all of them. 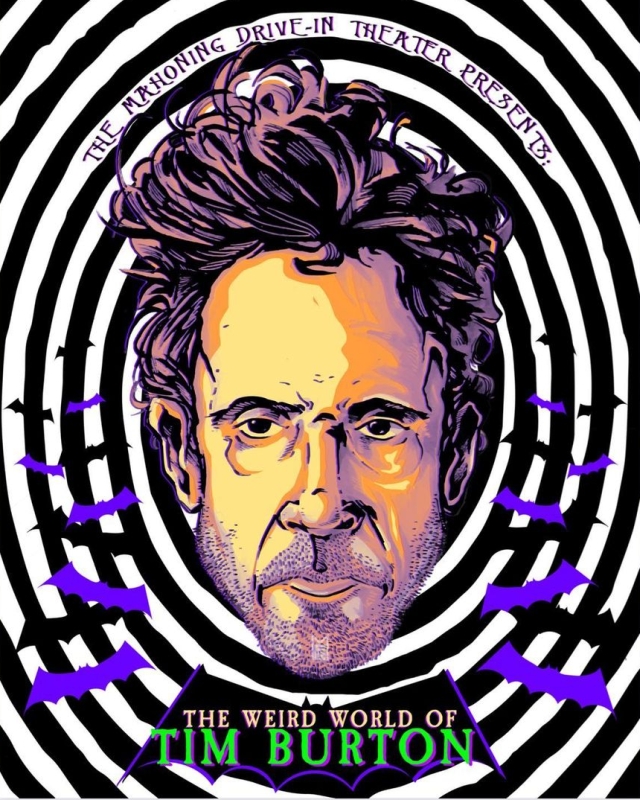 The poster for this weekend was designed by Max Gagnon.  The artwork is very good, but I'm not sure that I understand some of the design choices.  I enjoy Burton's Batman flicks, but they weren't shown during this event and they really don't represent the "weird world of Tim Burton" as much as the world of DC Comics though the eyes of the director.  Tim Burton has a very distinct style, with stripes and polka dots and a wide variety of characters, many of which were shown on the big screen this weekend, but that spirit is nearly absent from the poster.  As much as I appreciate the quality of the work that went into this, I think it's a bit off the mark as a representation of this event. 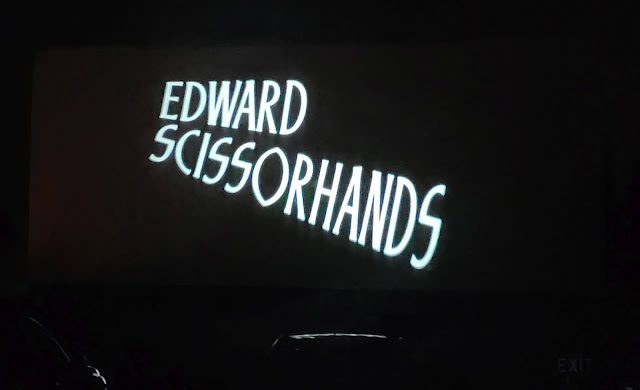 The first film that was shown on Friday night was Edward Scissorhands.  I think that some of the magic of this movie has been forgotten or overlooked in the decades since it was released, but it truly is one of the most beautiful and engaging films of the 20th century.  It is a story of isolation and rejection, and how someone can never really feel like they belong among other people, despite the occasional burst of acceptance they might experience.
The story is set in a unique universe of a mid-century ticky-tacky community that exists in the shadow of a gothic mansion on the hill.  I've often heard it said that the movie is set in the 1950's or early 60's, but that isn't the case.  The story includes answering machines and references to taping something on VCR, and the vehicles driven in the community are primarily from the 70's and 80's, including the 1977 AMC Gremlin driven by Peg Boggs as she brings Edward home, the 1971 Chevy Van with flames painted on the sides that Kim and her boyfriend Jim ride around in, and a 1985 GMC Vandura that is driven by the news crew who attempts to interview Edward after his arrest.  These aren't the kind of decisions that a director like Tim Burton makes by accident.  They give the film a timeless quality that hints at several decades in the latter half of the 20th century, almost as if the older Kim Boggs is retelling the story in her dreams, where things from various time periods in her life mix together randomly into a surreal world. 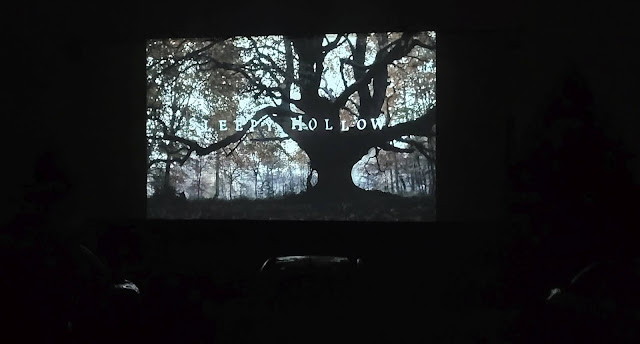 Sleepy Hollow is a movie that I first saw when I was 19 years old, but I haven't watched it since and I didn't remember anything about it.  It definitely strays pretty far from the source material, but it's an enjoyable mystery/horror flick with incredible costumes and atmosphere, and it's the perfect thing to see at the drive-in this time of year.  Friday night ended with a fun surprise, but you'll have to come out to the drive-in to see those! 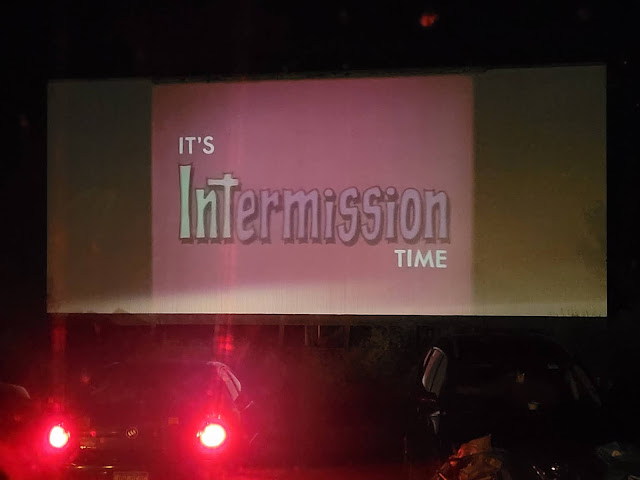 When we go to the drive-in on Friday and Saturday, it sort of feel as if Saturday morning and afternoon are just a very long intermission between films, and the world off of the lot is just an extension of the concession stand. 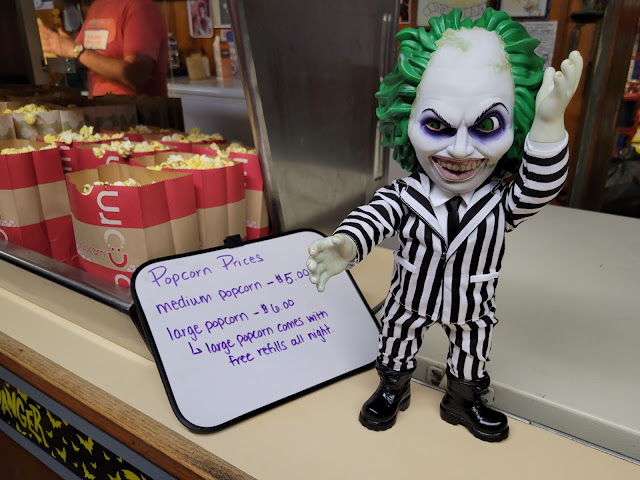 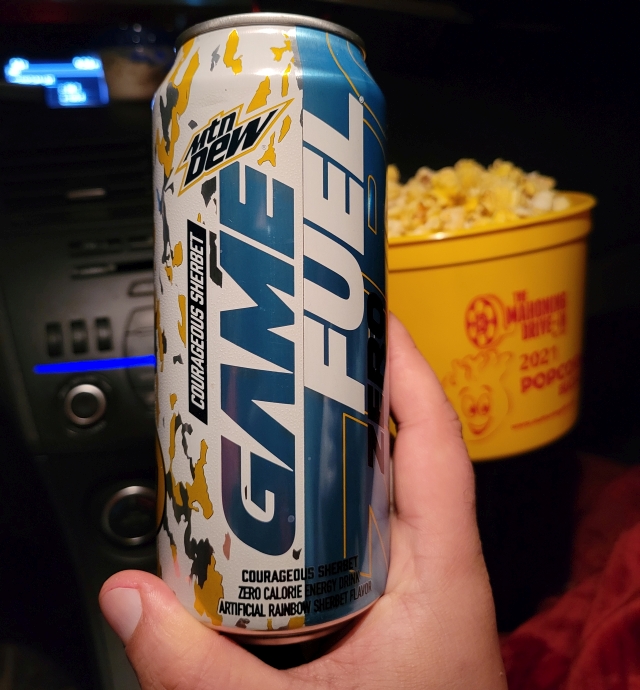 Speaking of the concession stand, one of the fun surprises that I found on Saturday was a can of Mountain Dew Courageous Sherbet.  I hadn't heard of this before, but it's apparently pretty hard to get.  It was sold online through Game Fuel, which is geared towards gamers who play the type of video games that I could not possibly be less interested in.  This is probably why I never heard of the soda.  Anyway, it was pretty good.  It tastes like rainbow sherbet, and I'm glad to have had the opportunity to try it without subjecting myself to any of the ridiculous dudebro gamer marketing that seems to be the focal point of their website. 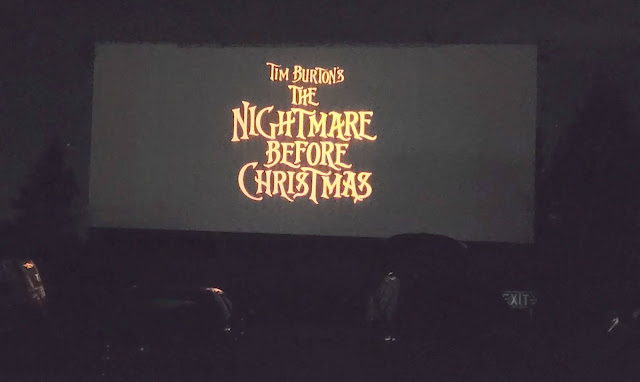 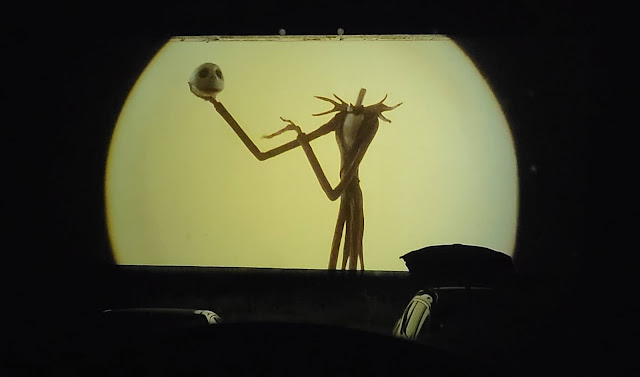 There's nothing I could possibly say about The Nightmare Before Christmas that hasn't already been said, but I believe that it's about as perfect as an animated film can be.  Like most stunning works of art, it has been marketed to death since its release, and I could definitely understand how the over-marketing and merchandising of its music and its characters could make it difficult to fully appreciate.  It's like looking at the Mona Lisa.  You've seen it so many times that you have to deliberately put yourself in a state of mind that you're going to see it through fresh eyes; to segregate your memory of novelty socks and t-shirts and just be present in the moment to experience this masterpiece for what it has to offer on its own merit.  Let me tell you, there's no better place to do that than a dark night at the Mahoning Drive-In, and there's no better way to see it than a projection from original 35 mm onto a giant screen beneath the stars. 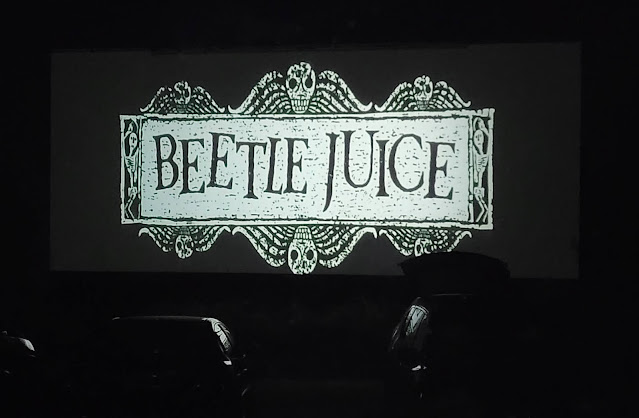 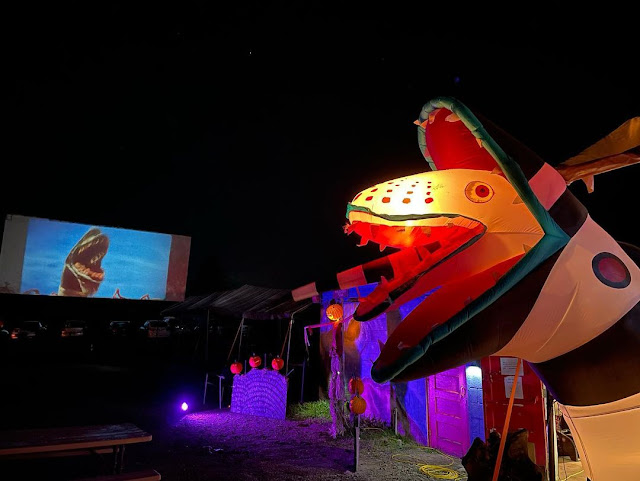 Beetlejuice is one of those 80's classics that has always existed in the background for me.  For whatever reason, I wasn't really interested in seeing this when I was a kid.  I guess the trailer just didn't hook me, because to this day, when I think of Beetlejuice, all I can picture is Michael Keaton spreading his arms out and saying "I'm the ghost with the most".  In fact, before last night, I had never sat down and watched the entire film.  I had seen bits and pieces of it over the years from flipping through channels, but that's about it.   Having finally watched the movie last night from start to finish for the first time, I can definitely say that I am a fan!  The creatures and the effects are in Tim Burton's unmistakable style, as is the story, which contains sweetness, darkness and humor in equal measure.
Just like on Friday, there were some fun surprises, both before and after the show, and another incredible weekend at the drive-in came to a close.  Next weekend is the end of the season - three more nights of incredible movies under the stars.