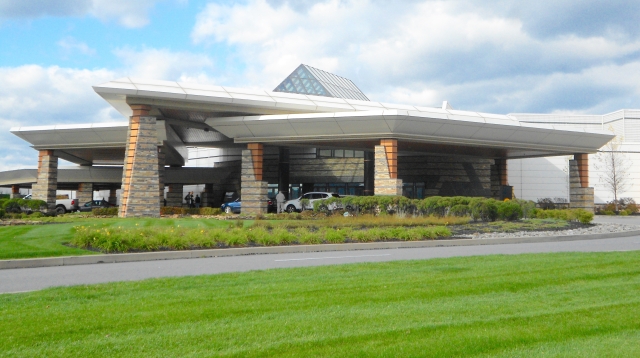 Mohegan Sun Pocono
Wilkes-Barre, PA
The Mohegan Sun at Pocono Downs Casino began offering slot machine gaming 15 years ago in November, 2006.  I'm not much of a gambler, but my grandparents took a monthly bus trip to Atlantic City throughout the 90's and 2000's.  They still went to New Jersey once in a while after slot machine gambling was legalized in Pennsylvania, but they went much less frequently when they could just drive north on I-81 for a half hour instead of sitting on a bus for three hours each way.  They must not have been alone, because Pennsylvania had the second highest grossing casino revenue in the country by 2017.  Nevada is the only state with more successful casinos.  I'm not sure if that's a good or bad thing, but no one is forcing anyone to play.  I haven't spent a dime at the Mohegan Sun Pocono yet, and I don't plan to.

Even though I don't gamble, I have been here a few times.  The casino had pretty modest amenities when it first opened for slot machine gambling in 2006.  The restaurant section looked a bit like a high school cafeteria with just a few options.  One of those options was a small bakery that sold muffins.  Because my grandparents were somewhat frequent gamblers (they went about once a month), the Mohegan Sun used to send them coupon books that could be used at their restaurant.  They never used them, so they gave them to me, and my girlfriend and I drove up there to redeem the coupons for a few tasty muffins to have for breakfast.  We were pretty broke in those days.  I was a full-time student at Wilkes University, and she and I both had part-time, low wage jobs, so those free muffins were a nice treat.  I can't help but to smile when I think about those days.

I also remember the last time I was at this casino.  It was March 9th, 2011.  My grandfather was diagnosed with pancreatic cancer in November 2010.  He had been doing reasonably well through Christmas and into January, but it was becoming clear by February that he didn't have long.  I was in my last semester of college, and I tried to spend as much time with him as I could.  He loved going to play the slot machines, so during Spring Break, I bought both of my grandparents to the Mohegan Sun to play for a little while.

Grandpa played the machines (particularly the Cheese Caper one in the photo above), and we stopped by the restaurants in the casino for dinner afterward.  The muffin place was gone by this point as the casino had been remodeled and looked more like the ones in Atlantic City.  I can't remember what I ate for dinner that day, but I do remember that we went to the Ben & Jerry's ice cream parlor inside the casino for desert after we ate.  I bought a plastic reusable Ben & Jerry coffee mug while we were there.  I still have it today.

It was the last time that I remember Grandpa leaving the house.  He passed away less than six weeks later.