You Have A Drink Named Steve? 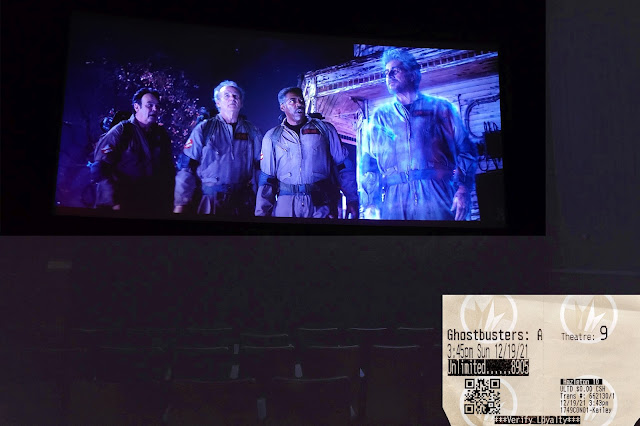 Ghostbusters: Afterlife
Sony Pictures (2021)
This was my second time seeing the third movie in what has become the Ghostbusters trilogy (that nonsense film from 2016 doesn't count... for anything).  We originally saw it shortly after it was released last month, and we went to the theater on Sunday afternoon to see the new Spider-Man flick, but we got there too late and decided to put Spider-Man off until tomorrow and to take the opportunity to see this wonderful film in theaters one last time.  It occurred to me that I didn't write anything about it the first time I saw it, and it seemed wrong to not include something about a movie that has brought back one of my favorite things from my childhood into the forefront of pop culture over 35 years later.
First, I should say that I was highly skeptical of this movie being any good.  I loved the original Ghostbusters movie from the first time I saw it as a child, and The Real Ghostbusters cartoon series was a staple of my Saturday mornings growing up in the 80's.  I had the toys.  I had the Ray Parker Jr. song on a 45 record.  I was all about Ghostbusters, but my thoughts on Ghostbusters 2 aren't so easy to sum up. 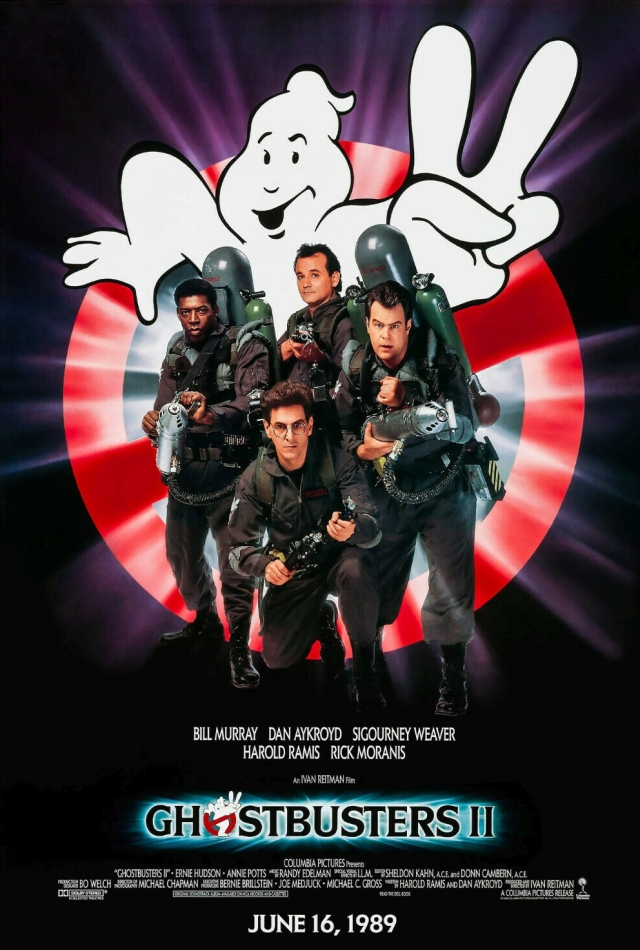 Ghostbusters 2 was one of the "big three" movies that I was hyped to see in the summer of 1989, along with Batman and Indiana Jones & The Last Crusade.  I saw it in theaters with my grandfather, and I enjoyed it.  What nine year old boy wouldn't love to see his favorite heroes drench the Statue Of Liberty in slime and use a NES Advantage controller to make it walk through New York City to battle evil?
As I got to be a teenager, I looked back on the second Ghostbusters movie with annoyance.  It's not that I disliked it, but all of the changes just reeked to me of studio meddling.  When I watch it, I can almost hear the asshole studio executives sitting around a table pitching their stupid ideas that changed the characters from the original film in ways that make no sense whatsoever.  Dana Barrett is a world class cellist who plays in the New York Philharmonic, but what if she was an artist who restored old painting at The Metropolitan Museum Of Art?  Louis Tully is an quirky accountant, but what if he was a lawyer who could step in and defend the Ghostbusters in court?  Janine Melnitz is a smart and sarcastic New York receptionist, but what if she was a complete flake?  Pete and Dana are clearly involved at the end of the first Ghostbusters film, but what if we had them break up, have Dana marry somebody else (who is never named or shown on camera), then have that guy disappear completely while Dana raises their infant son?  It's such a convoluted backstory, and it serves no purpose to the plot.  If they had just kept Pete and Dana together, with Oscar as their child, it would have changed literally nothing about the story told in Ghostbusters 2, other than to eliminate some pointless, awkward dialogue to explain a back story that didn't need to exist in the first place.
In recent years, I've come full circle and now appreciate Ghostbusters 2 in spite of its flaws.  I still won't say that it's a good movie, but it's an enjoyable bad movie.  Hearing just a couple of seconds of Bobby Brown's On Our Own is enough to bring me back to a time when a nine year old me spent the summer excited to see what the 90's would bring as I counted down the final months of the only decade I had ever lived through up to that point.  However, despite my warm, nostalgic feelings for Ghostbusters 2, I didn't want to see a third movie.  It had been rumored to be in the works since I was in middle school, with stories popping up from time to time about a new script that was in development, and how Bill Murray was holding things up because he wouldn't agree to be in the film.  Hearing that just made me appreciate Mr. Murray even more.  I wanted Hollywood to leave Ghostbusters alone and go create new, original concepts and stories that light the world on fire just as much as Ghostbusters did back in 1984. 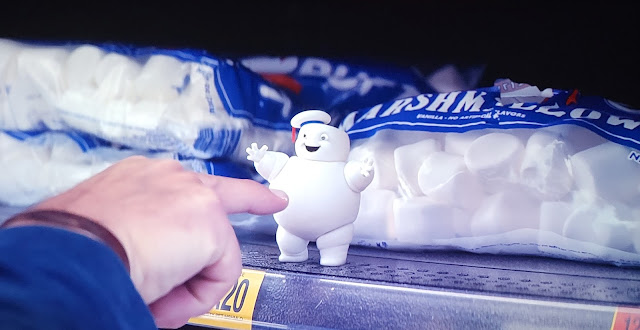 In the months leading up to Ghostbusters: Afterlife, I decided that it would be best if I avoided it as much as possible.  I had every intention of going to see the movie, but I wanted no parts of the marketing campaign that lead up to its release.  I didn't watch the teaser trailers online.  I didn't read any of the rumors.  I avoided Ghostbusters like the plague because few things annoy me in this world more than hype, and I wanted to give this movie a fair chance by going in as fresh as possible, with no expectations of what I was about to see.
Despite my best efforts, one piece of the hype busted through to my awareness - the baby Stay Puft Marshmallow Man, and it was like all of my fears were coming true.  As soon as I laid eyes on this cute little bastard, all I could think of is that some studio executive saw "Baby Yoda" from The Mandalorian and thought "hey, we could do that with Stay Puft" and sell a million little fluffy toys and other crap.  It's moments like this that make me realize that I really am turning into my grandfather more and more with each passing year.  But, I decided I would push the negativity aside... or at least that I'd close my eyes, plug my ears with my fingers and shout "la, la, la, la, la" at the top of my lungs until the Baby Stay Puft stuff went away or until I got to see the new movie, whichever came first. 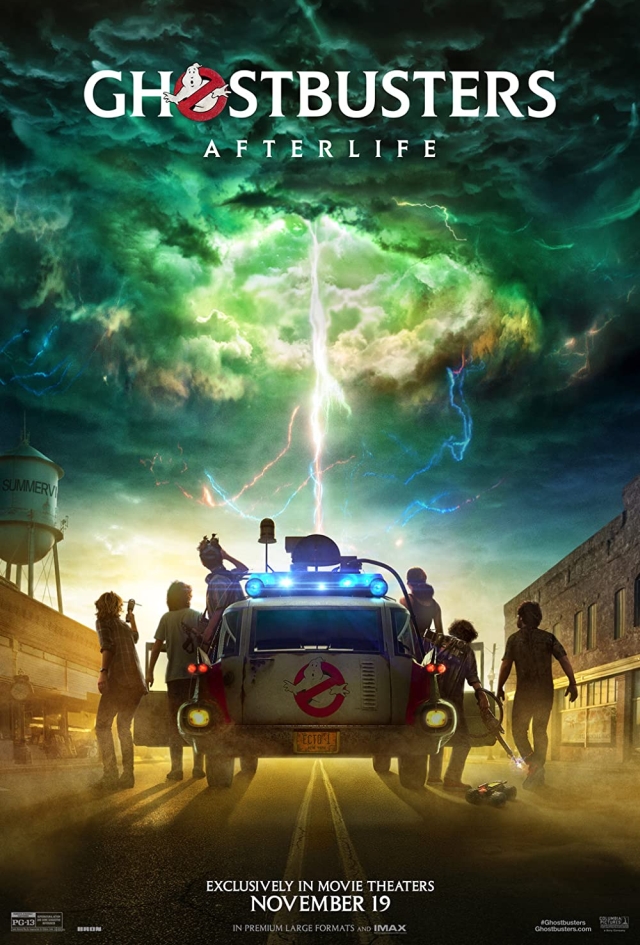 I saw Ghostbusters: Afterlife on opening weekend and enjoyed it a lot.  Now that I've had the opportunity to see it a second time and have had a little time to roll it over in my mind, I can say that Ghostbusters: Afterlife is as perfect of a rebirth of an old franchise that I think is possible.  It's warm, but funny.  It has an original story, but one that incorporates the story told in the first film.  It has new characters that bring as much to the table as their predecessors, particularly Mckenna Grace, who absolutely knocks it out of the park with her performance as Phoebe Spengler, and it brings back the original characters in a way that is both respectful and fun, but not in a way that overshadows the younger cast.  Even the damn Baby Stay Pufts, while clearly inserted into the film as a marketing gimmick to sell toys, was introduced in a way that was enjoyable and not overbearing.  Most importantly of all, it is a fitting and heartfelt tribute to one of the most talented men of his generation, and my favorite Ghostbuster, Mr. Harold Ramis.
There's nothing I would have wanted to see done differently in this movie.  It is everything that it should be, and I hope it is the gateway to introduce a whole new generation to the fictional world that inspired a little boy from Hazleton to stick a shoebox on his back and creep down the upstairs hallway hunting for ghosts.