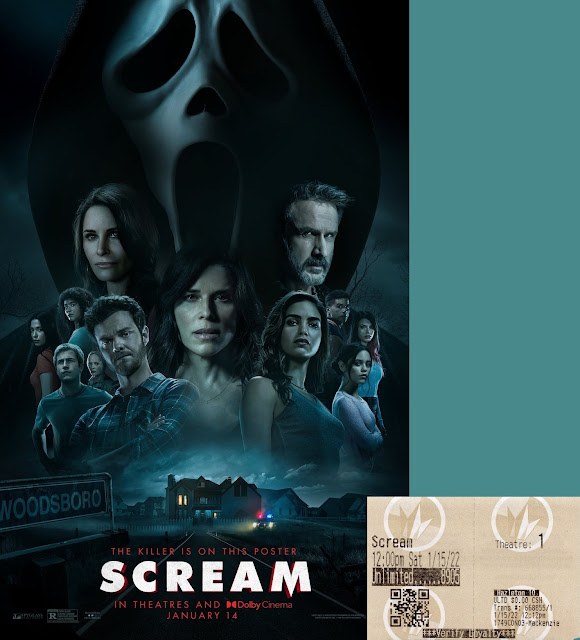 Scream
Paramount Pictures (2022)
I really wanted to go see this on opening night, but I've been feeling pretty lousy this week.  Not sure if it it's because of the change in the weather, or the Omnicron variant, or just a plain old ordinary cold, but it wasn't worth the risk of being around a large group of people.  Thankfully, that isn't a problem on Saturday mornings at the Regal Cinema in Hazleton.  I'm not sure if this works in every town in America, but if you want to see a hit movie on the big screen without waiting too long, and you also want to avoid the crowd, a noon screening the way to go.  The theater was completely empty except for one other couple that was sitting five rows away. 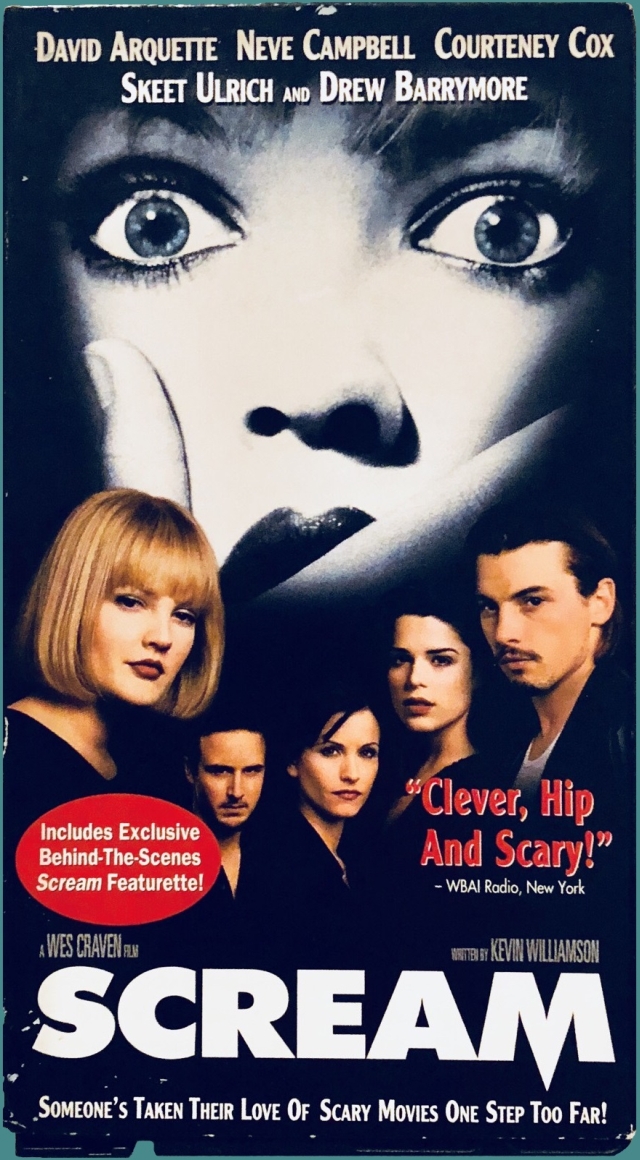 The first Scream hit theaters a few days before Christmas when I was 16 years old, but I can't remember if I saw it on the big screen.  I didn't have a car at the time, but there was a second run theater called the Key that was just a few blocks away from where I lived, so it's possible that this was one of the movies I walked down to see before it came out on VHS.  Either way, three of my major teenage crushes were Drew Barrymore, Neve Campbell and Rose McGowan, so to say that this tape had a lot of time in my VCR would be an understatement.
Scream was more than just an iconic horror flick; it stands apart for the way that it holds up a mirror to both the horror movies and to the fans.  It also almost single-handedly rebirthed the slasher genre in the mid to late 90's which resulted in a countless string of horror movies over the next ten years, including several Scream sequels. 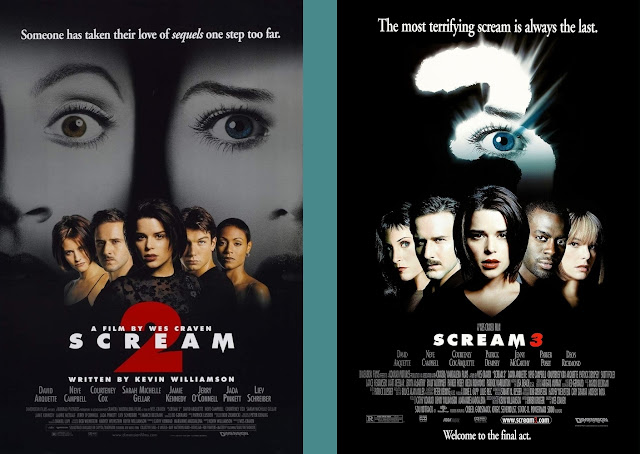 Scream 2 is the only film in the original series that I can say for sure that I saw on the big screen during its theatrical one.  It was released almost exactly one year later, and I was looking forward to it for two reasons.  The main reason is because I loved the original film, but I was also psyched because Jerry O'Connell was cast in the film.  I was a huge fan of Sliders, and I made it a point to see just about all of his movies - even Joe's Apartment.  Unfortunately, as is often the case with horror movies, the sequel pales in comparison to the original.  It's not a bad movie, and the plot twist for one of the killers is pretty good, but it tries to be a bit too clever with it's life-imitating-art narrative and a ham-fisted social commentary on the media and the spectacle of the OJ Simpson trial.  It's definitely worth watching if you haven't seen it, but if you're looking for a good horror movie set on a college campus, there are a few dozen other flicks that I'd recommend ahead of this one.
Scream 3 came out in February 2000, and I can say for sure that I didn't see this one in theaters, but I did rent it not too long after it came out on DVD.  It has a pretty funny cameo appearance from Carrie Fisher and Jay and Silent Bob, and I got a kick out of seeing David Puddy from Seinfeld playing an overzealous Hollywood security guard.  Dewey getting clunked in the head with the handle of a knife that was thrown at him by the Ghostface was pretty classic too, but the story was a bit convoluted.  Like the second movie, it's not bad, but it doesn't live up to the original.  Few sequels ever do.
There was a Scream 4 that came out in April 2011, but I still haven't gotten around to seeing it.  To say that 2011 was an emotional roller coaster would be a massive understatement, so I didn't see a whole lot of new movies that year.  I know that it has the distinction of being the final film to be directed by Wes Craven before his death in 2015.  There was also a Scream television series that I didn't even know existed until about a week ago.  I haven't heard anything about them one way or the other, so all I can tell you for certain is that you'll be able to enjoy the fifth Scream movie without seeing any of these. 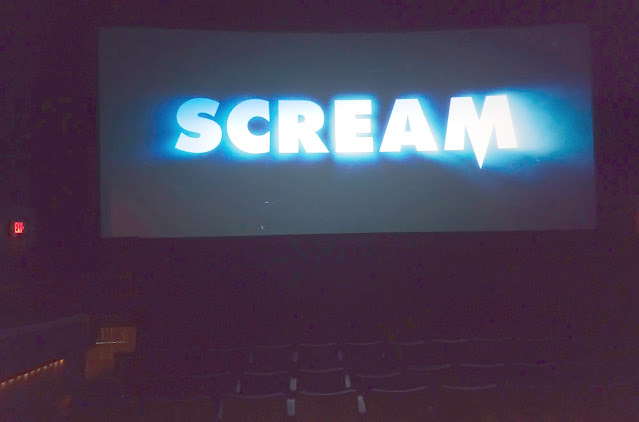 My movie watching habits have changed a lot since the last Scream movie was released.  We signed up for Regal Unlimited six months before the start of the pandemic (give or take a few weeks), and the closest theater is less than three miles away.  These days, I go to see just about everything, even if I don't know anything about them.  Going in completely blind can be a really great way to see a movie, because there's no expectations.  You just walk in, settle into a seat that will be your home for the next couple of hours, wait for the lights to go dim and just let the filmmaker tell you a story.
This obviously wasn't that kind of situation, but the Regal Unlimited subscription has been kind of liberating.  There no need to be concerned about whether a movie is worth seeing, because you can go as many times as you want - it's all covered by the subscription fee.  I certainly haven't loved everything I've seen at Regal over the past year and a half, but there's nothing that I wouldn't consider at least giving a shot.  With that in mind, I set aside my skepticism of sequels and reboots and looked forward to seeing this new Scream movie, and I'm glad that I did.
The 2022 Scream is the best movie I've seen in the franchise since the original.  Like the first movie, it does a brilliant job of holding a mirror up to the world that created it.  It has smart commentary on the Hollywood trend of sequels, prequels, remakes, reboots, and "requels", as well as to the culture of people who take entertainment to an obsessive and damaging level.  I won't risk spoiling it by saying anything else, but it's a lot of fun and definitely worth seeing, whether you've got the unlimited deal or not.