There Was A World Once, You Punk 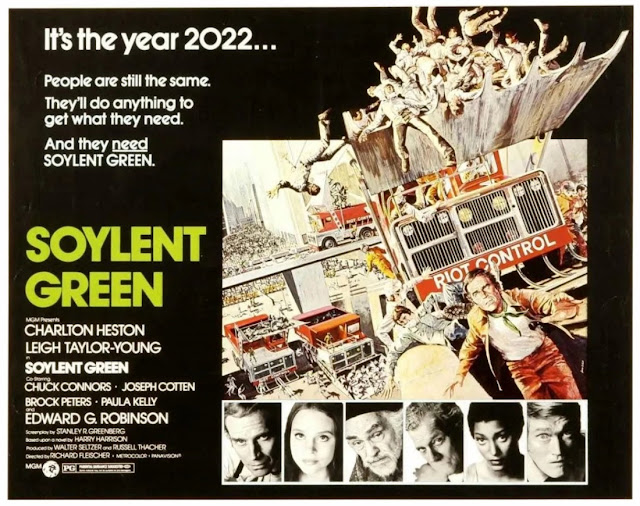 Soylent Green
MGM Studios (1973)
This is one of those movies that has been parodied and mocked so many times that it seems to have lost its impact on modern audiences.  I think that's a damn shame, because it's one of the greatest and most realistic works of dystopian fiction that I've ever seen.
On the off chance that someone is reading this who hasn't heard about the twist, I won't give away the most famous line spoken by Charlton Heston at the end of the movie.  I will say that this movie is so much more than that single plot twist.  It paints a picture of a world that is suffering from the effects of pollution, overpopulation and global climate change to a point where everyday resources that we take for granted are luxuries that only the wealthy can afford.  It is a world where even a small apartment is affordable to very few, and where real food is so scarce and expensive that jar of strawberry jam cost over $100.
Much of the dialogue that discusses the changes in the world as it was and the world as it is are between Detective Thorn, played by Heston, and the much older Sol Roth, brilliantly played by Edward G. Robinson in what would be his final role (he passed away from bladder cancer less than two weeks after the the final day of filming).  Sol is old enough to remember the world as it was, and when he tells stories about that world to the much younger Detective Roth, they're disregarded in the same way that a child might react today if you tried to explain things like video rental stores or computers in the years before the internet.

Sol Roth:  Son of a bitch. I haven't eaten like this in years.
Detective Roth:  I never ate like this.
Sol:  And now you know what you've been missing. There was a world once, you punk.
Thorn:  Yes, so you keep telling me.
Sol:  I was there. I can prove it.
Thorn:  I know, I know. When you were young, people were better.
Sol:  Aw, nuts. People were always rotten. But the world was beautiful.

Sol Roth:  You know. When I was a kid food was food. Before our scientific magicians poisoned the water, polluted the soil. Decimated plant and animal life. Why, in my day you could buy meat anywhere. Eggs, they had. Real butter. Fresh lettuce in the...
Detective Thorn:  I know. Sol. You told me before. A heat wave all year long. A greenhouse effect. Everything is burning up.

Consider that this dialogue was spoken in a motion picture nearly 50 years ago, and consider that it was written about the year that we have all just entered into.  The reality of 2022 is a hell of a lot better than the world that was imagined in Soylent Green, but it does feel like the seeds of that world have been planted, and that we may be in the early days of slipping into that future.
As much as I love horror movies, I am very rarely scared by them.  Even when I was a kid, I was never actually afraid of Michael Myers, Jason Voorhees, Freddy Krueger, or any of the vampires, zombies or other monsters.  The world in Soylent Green scares the hell out of me.  It scared me when I first saw the movie as a teenager in the 90's, and it scares me today.