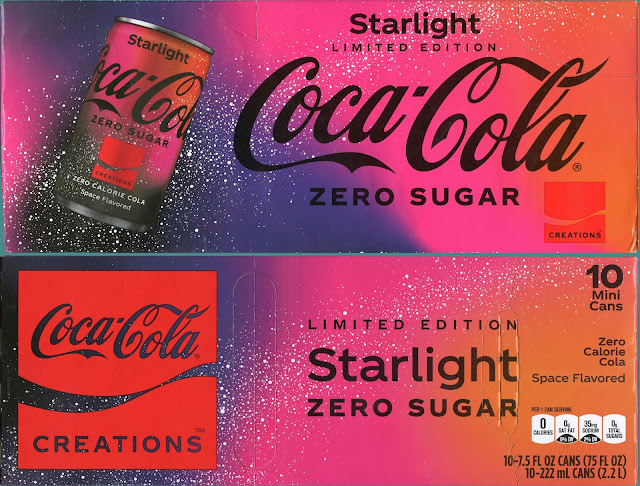 Starlight Space Cola
Coca-Cola (2022)
I'm accustomed to hyperbole in the marketing of a new product, but Cola-Cola is really laying it on thick with their new Starlight "space flavored" cola.  Here's what the website has to say about it:

You hold the celestial power of the universe in your hand. Discover what it is like to drink Starlight, on Earth for a brief encounter. Infinite possibilities are yours when the ever-cool, indulgent flavor of space hits the #RealMagic of our great Coca‑Cola taste.

Starlight’s red hue sparkles with a cooling sensation that has been transformed by the magic of space. Transport yourself to a new galaxy with each sip. Discover the sensation before it’s gone.

The celestial power of the universe?  Red hue sparkles with a cooling sensation?  The magic of space?  Transport yourself to a new galaxy?  What the hell are they talking about?  Well, I guess there's only one way to find out. 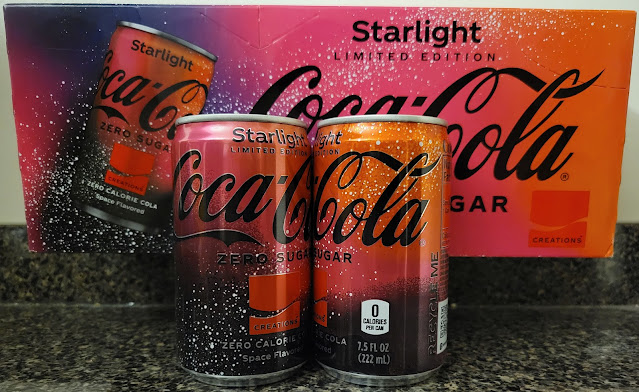 Thankfully, Coca-Cola have produced a Zero Sugar version of their Starlight Space Flavored cola, so I'm able to try it without breaking the promise I made to myself to not break my diet just to try a limited edition product.  I'm not sure if it's sold in any other sizes, but I found both the regular and Zero Sugar versions in a 10 pack of mini 7.5 oz cans.  It was just under five dollars at Wal-Mart, which isn't a terrible price. 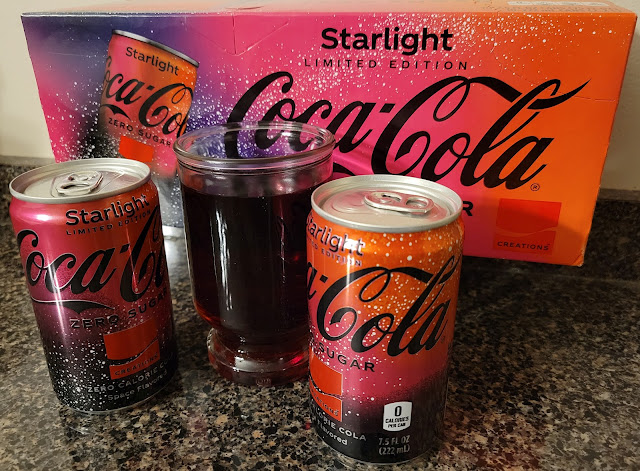 When I read "red hue sparkles", I was almost expecting the soda to have chunks of crystal or little red balls like the old Orbitz drinks used to have.  There was nothing like that, but the soda itself is definitely red.  The photos came out a little dark, but there's no way you would get this mixed up with a regular Coca Cola if you had a glass of each sitting next to each other. 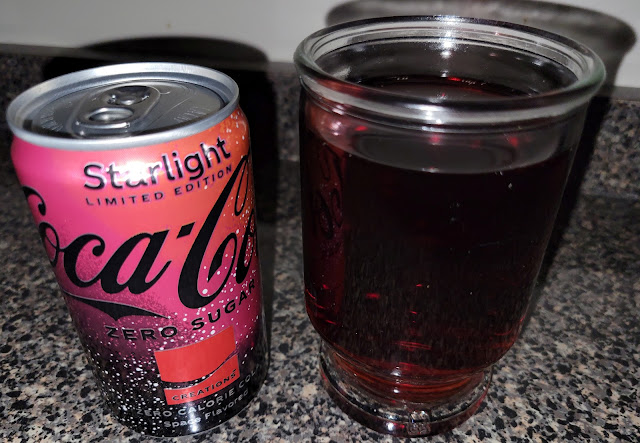 The soda itself is absolutely delicious!  I don't know if I feel like I've been magically transported through the celestial power of the galaxy, but I'm glad that I bought it.  The flavor reminded me of cotton candy mixed with Coke.  In fact, it reminds me of those Cotton Candy Grapes that come out in the summer.  It's so similar that I wouldn't be surprised if they used them as an ingredient.  Also, it does leave you with a cooling sensation after you drink it - almost like a mild menthol aftertaste.
I'm sure that the sugar version is probably even better than this, and if I wasn't on a diet, I'd be curious to know what a Starlight Coke Float would taste like.  But even if you're watching your sugar like me and have to opt for the Zero Sugar version, Starlight Coca-Cola is a winner.