An Ice Cold Can Of Nitrogen 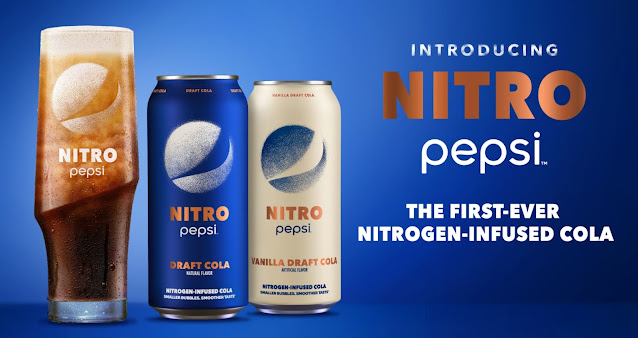 Nitro Pepsi
PepsiCo (2022)
I broke my diet so that I could give this a try and see what all of the fuzz is about.  They don't make a diet version, but it was easy enough to subtract the sugar and calories from the other things that I had to eat and drink, so I don't feel too bad about it.
From the moment I opened the can, this was like no other soda that I've ever had before.  It doesn't sound the same as when you open an ordinary can of soda.  It doesn't have the same mouthfeel.  It doesn't taste the same as regular Pepsi.  The best way I can describe it is to say that it's like drinking a thin, carbonated, Pepsi-flavored whipped cream.  It still has the bubbly feeling of soda, but it goes down super smooth.
The website suggests that you open the can and turn it completely upside-down to empty it into a glass so that you can it foam up.  I just opened the can and drank it, so I don't have any photos of the soda that look especially fancy.  Whether the aesthetics of it interest you or not, I will say that this is definitely a soda worth trying.

UPDATE: I picked up another can to see how it foams up when you pour it.  It's pretty cool, I guess.  It's not the kind of gimmick that's impressive enough to buy for that reason alone, but the flavor makes it worth picking up.