My Demons Don't Get Out That Much 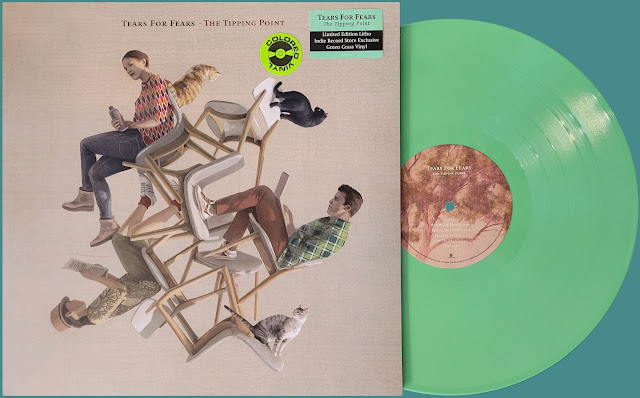 The Tipping Point
Tears For Fears (2022)
When I pre-ordered this record back in October of last year, I made the decision to avoid the singles and other clips that were available from the various streaming services so that I would hear these songs for the first time in order, front to back, from a vinyl pressing.  Maybe that comes across as sounding hipsterish, but that's not my intention.  I figure it this way: how many more chances am I going to have in my life to listen to new music from a band that I loved in the 80's the same way I would have listened to it when I was a little kid back in the 80's playing my mother's records and hearing those songs for the first time?
The album came in the mail yesterday.  As luck would have it, I couldn't sleep, so I sat next to my record player at 2:30 in the morning doing exactly what I had set out to do.

I began writing this just a few minutes after the tenth and final song finished playing, and I feel like I've come down from floating on a cloud.  This is a beautiful album that breaks your heart and comforts you at the same time.  It's powerful and peaceful; full of rage, sorrow, and confusion, but acceptance.  This is not the work of a band that is trying to be young again and imitate who they were.  This is the music from artists who have captured the moment in a way that only they could.  It is incredible for everything that it is, and for everything that it refuses to try to be.
Tears For Fears are touring in the US this summer.  I was looking forward to seeing them for what will be the third time before I heard The Tipping Point.  Now that I've heard it, I'll be counting down the days until I can hear some of these songs performed live.
The record ends with a song called Stay that was originally released five years ago on Rule The World: The Greatest Hits.  I never listened to the Greatest Hits album, so just like the songs that came before, this was my first time hearing it.
Stay
Tears For Fears (2017)

Speak, don't speak
Go, don't go
Damned if I do, damned if I know