I'm Looking For The King Of 42nd Street 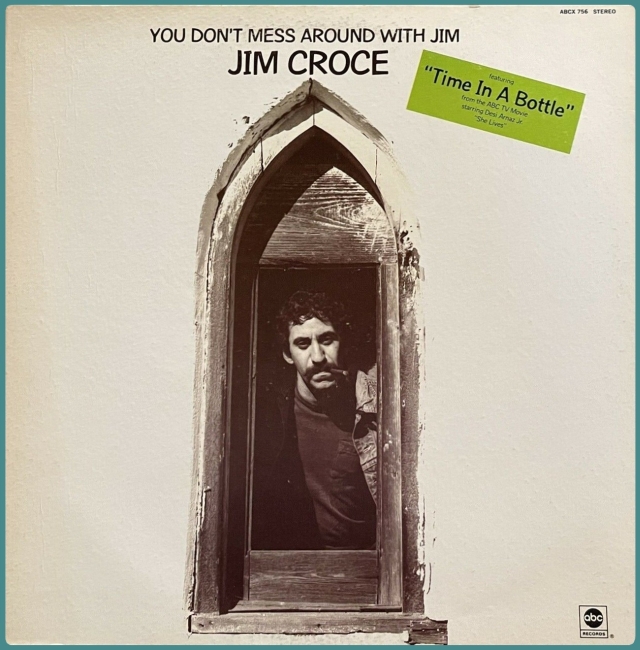 You Don't Mess Around With Jim
Jim Croce (1972)
The third studio album from legendary singer/songwriter Jim Croce was released 50 years ago this month.
When I was growing up, there was a stereo in my bedroom that had a radio tuner, a turntable and an 8-track player.  I'm guessing that it belonged to either my mother or my father when they were teenagers in the 70's.  They had a newer model in the living room, so they just hooked the old one up in my room because I had a lot of records with music for children, and a pile of those "See, Hear & Read" book and record sets.  I'm not sure if they still make them, but it's basically a children's storybook with lots of pictures and a record that read the story to you, with intermittent beeps to tell you when to turn the page.  I think these played a huge role in how I learned to read at such a young age.
Anyway, in addition to the kids stuff, my mother kept a box of records in my room near the stereo.  My parents didn't mind if I listened to them as long as I was careful not to scratch them, and that I put them away when I wasn't listening to them.  There were quite a few full albums and 45 singles from a wide variety of artists, including The Beatles, The Doors, Simon & Garfunkel, Gordon Lightfoot, The Monkees, The Nitty Gritty Dirt Band, Donna Summer, Carl Douglas, Abba, The Mamas & The Papas, Van Halen, Elton John, and many others that I can't think of at the moment.    I don't think that I'll ever be able to express how thankful I am to have been able to discover this music at such a young age.  I spent hours laying on the carpet coloring, or playing with toys or playing with the dog while listening to what would be the foundation of a lifelong love of music.
There was a lot of great music in that box, but the record that I remember playing the most was You Don't Mess Around With Jim by the great Jim Croce.  In fact, one of my earliest childhood memories comes from this record.  I couldn't have been older than six years old because my parents were still together.  Dad was tucking me into bed, and I asked him what Time In A Bottle meant.  I don't remember exactly what he said, but he explained it to me in a way that a little kid could understand, and I loved the song even more from that point forward.

The review above was published just a couple of months after the album was released.  I don't know the name of the person who wrote it, but they got it right on the money when they said "You'll like Jim Croce.  It's impossible not to."  There are few other artists whose music comes across as warm and heartfelt as his.  These are folk rock songs that tell a story so vividly that it almost forces you to picture it as you're listening.  The title track sounds like a scene out of a Quentin Tarantino flick set to music, while Operator paints a picture of a man thinking about a past relationship in a way that isn't desperate or longing, but with a warm sense of acceptance and love in his heart for someone who destiny took down a different path in life.  Then, there's Time In A Bottle, which I believe is the most beautiful and heartfelt love song ever written.
I have no idea who reads the things I write on here, or when they happen to find them.  So, whether you're reading this the day after I wrote it or decades after I've passed on (assuming that it doesn't get purged at some point), please take a moment to go on YouTube or Spotify or whatever music services exist at the time you're reading this and listen to this record.  Listen to all of his records, and share them with others.  I promise you that you'll be very glad that you did.