To The Batmobile, Robin! 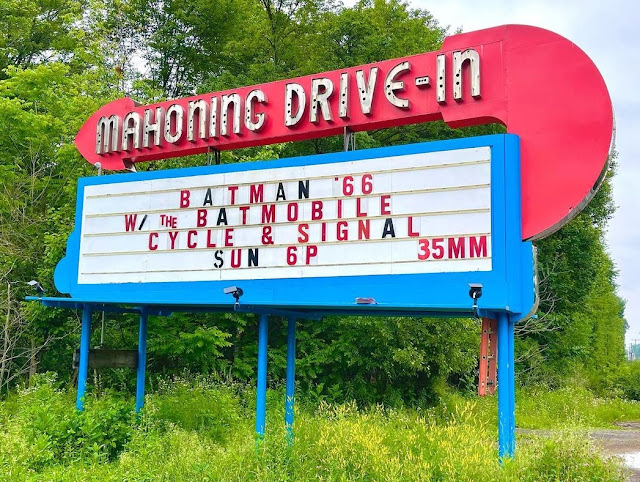 Batman: The Movie
Mahoning Drive-In Theater - Lehighton, PA
Tim Burton's Batman movie premiered in theaters just a few days before my 9th birthday.  My grandfather brought me to see it, but it wasn't the first time that I got to see a film about the Caped Crusader with my grandpa.  That came a few years earlier when we watched the 1966 classic, Batman: The Movie.
The 60's Batman television series starring Adam West and Burt Ward has been my favorite version of the Gotham City crimefighter since I was old enough to know who the character was, and Batman: The Movie is set in this universe.  The movie features four of the most prominent super villains from the series.  Three of them were played by the actors from the television series: The Joker (Cesar Romero), The Penguin (Burgess Meredith), and The Riddler (Frank Gorshin).  The Catwoman rounds out the villainous foursome, but Julie Newmar was injured at the time of filming, so Lee Meriwether donned the catsuit for Batman: The Movie. 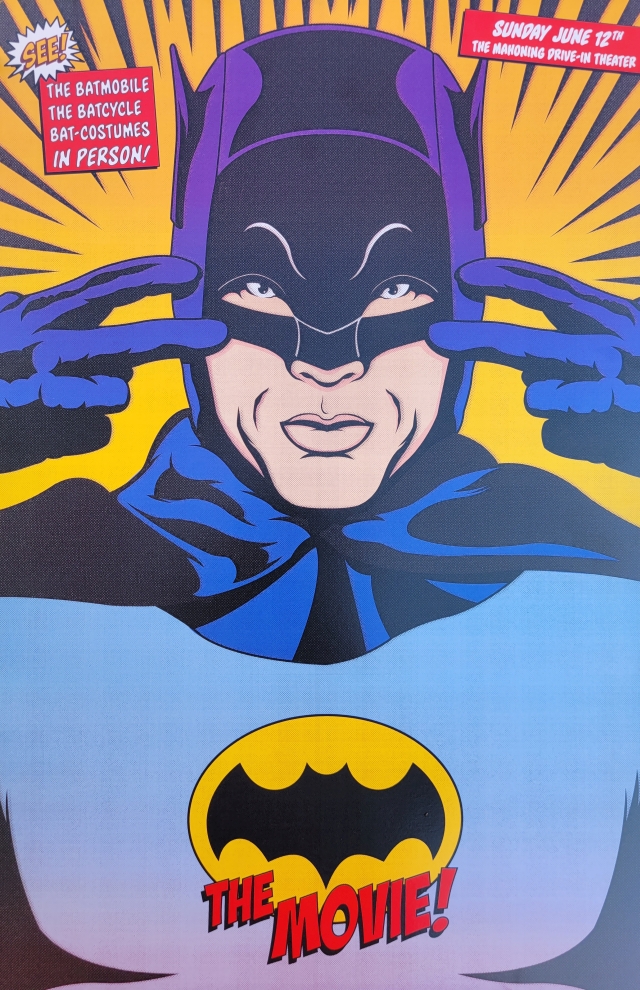 The poster for last night's show was designed by artist Steve Dziedziak.  As it says in the top left hand corner, getting to see this classic flick projected on the big screen from a 35mm print was only part of the attraction last night at the Mahoning Drive-In Theater. 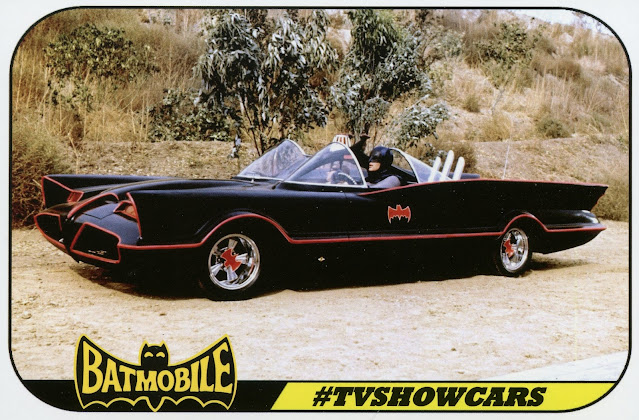 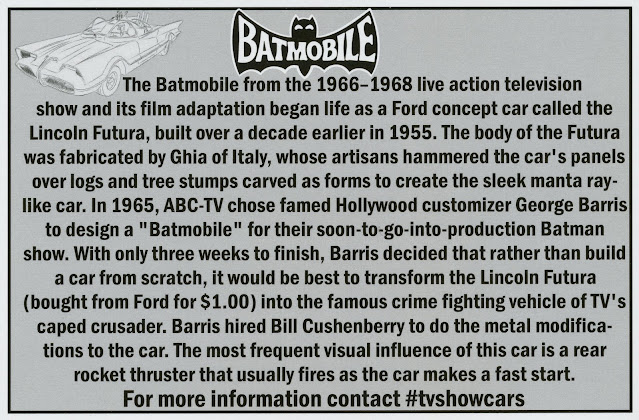 A group called TV Show Cars were on the lot with a screen accurate 1967 Batmobile.  They had a setup where you could take a photo with the car and with two cosplayers who were dressed up as the 60's television versions of Batman and Batgirl, and then have an 8x10 photo printed right there on the spot. 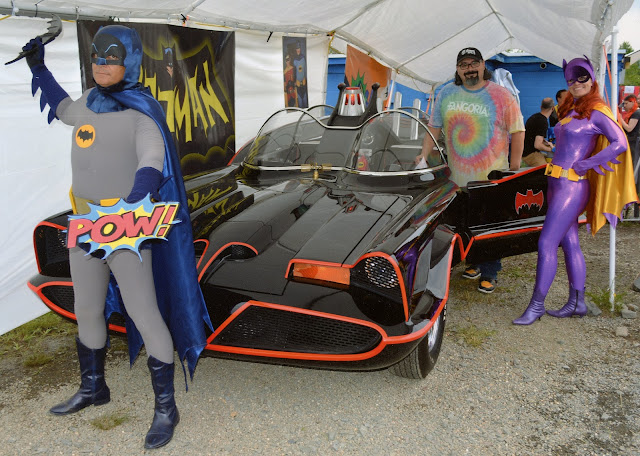 The rain held off just long enough to give me time to take a few more photos of the Batmobile after the line cleared out. 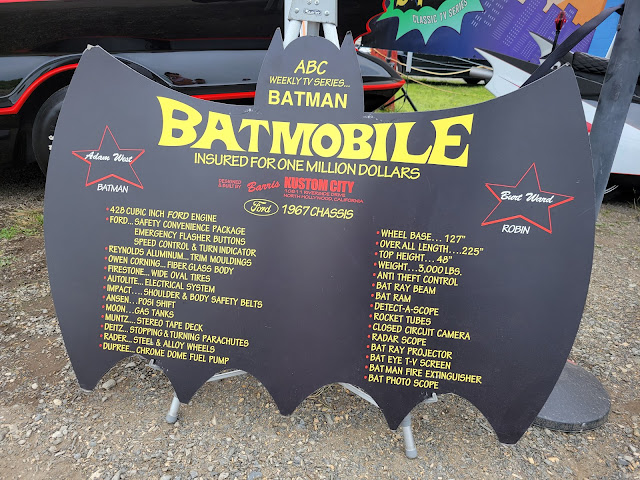 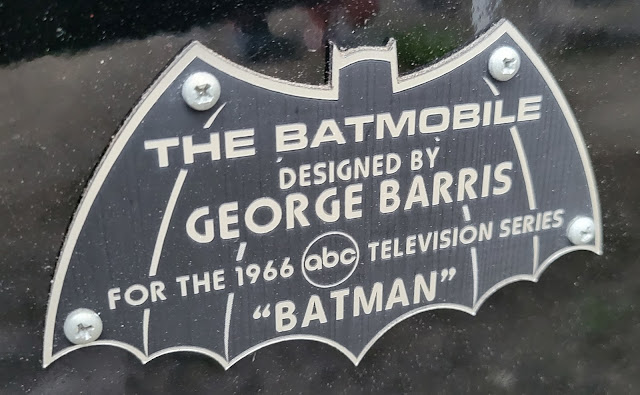 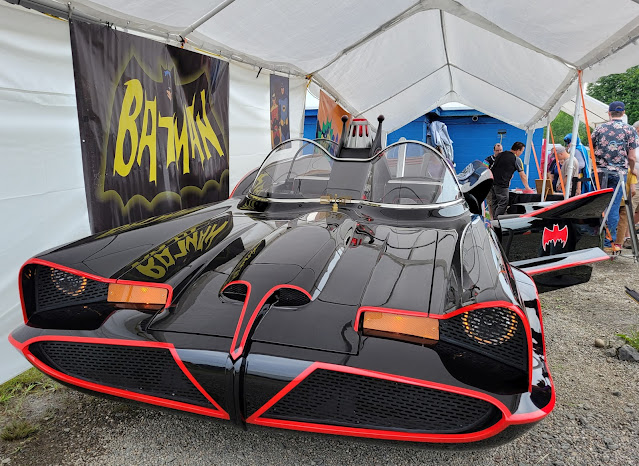 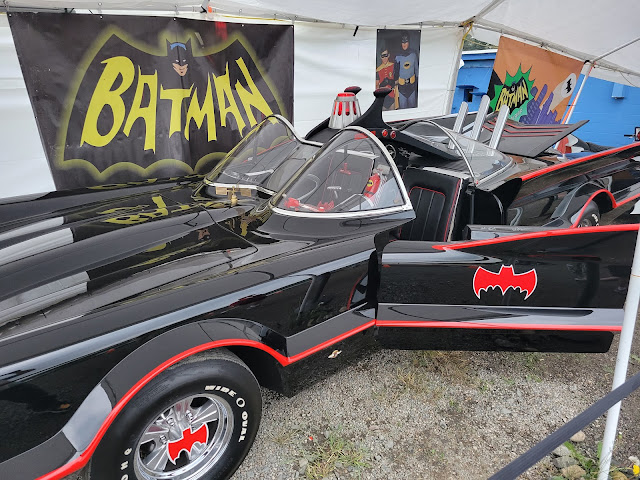 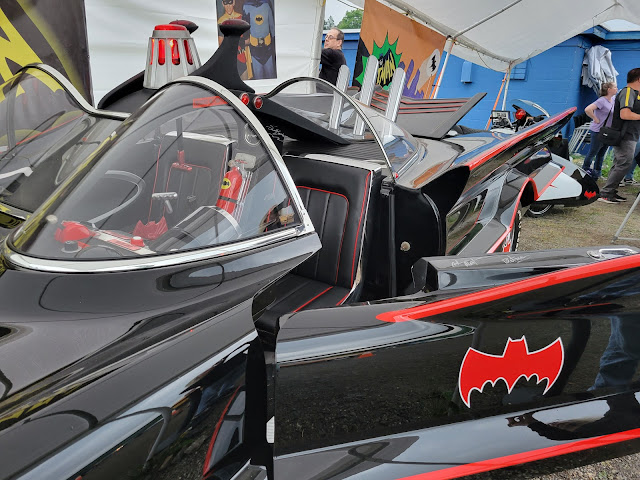 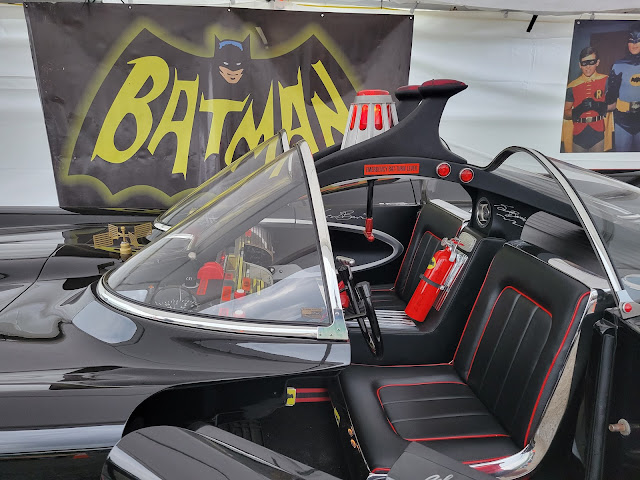 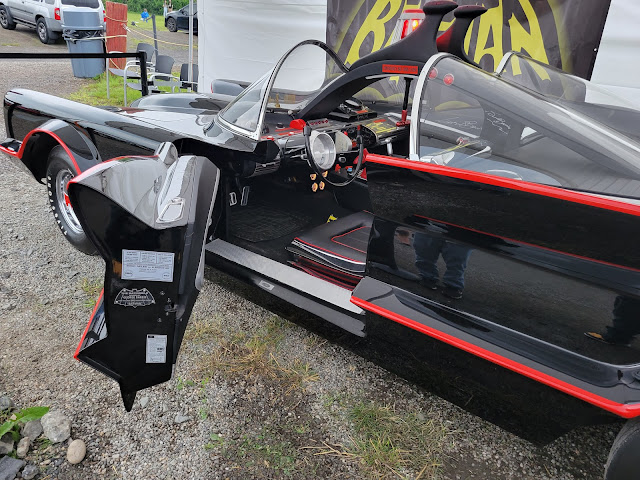 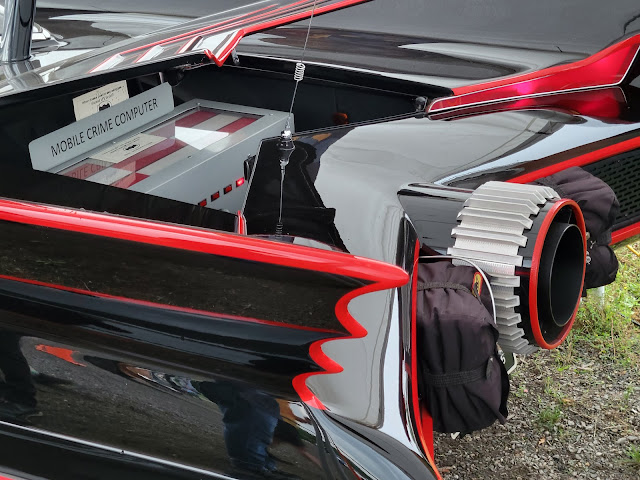 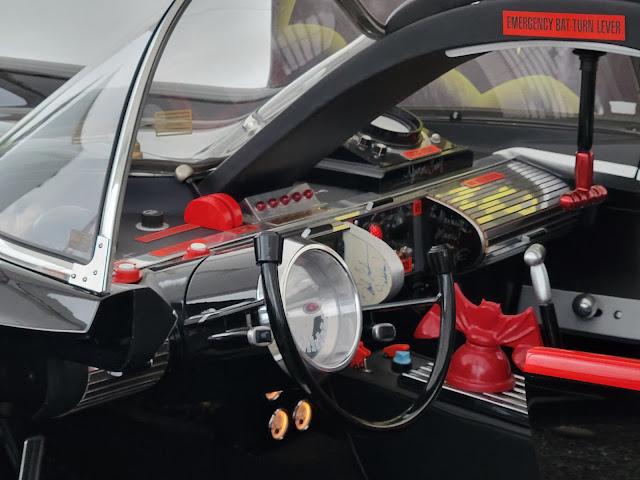 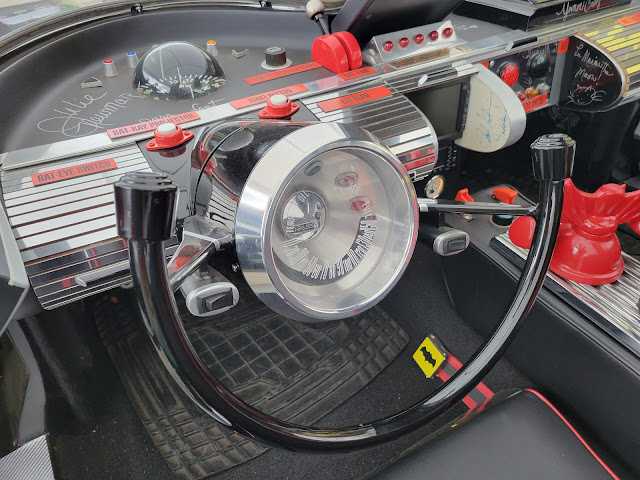 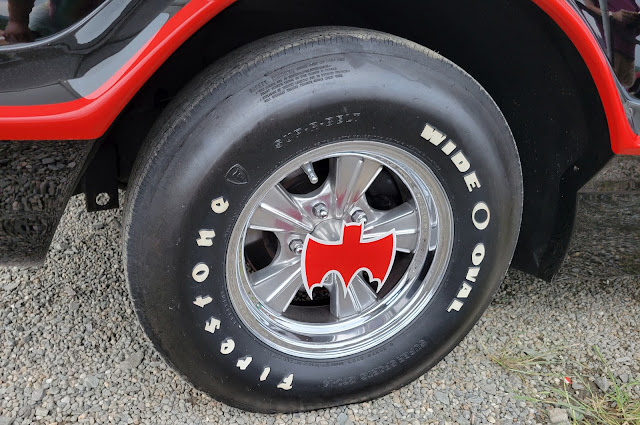 Maybe I went a little overboard with all of the pictures, but it's the freakin' Batmobile! 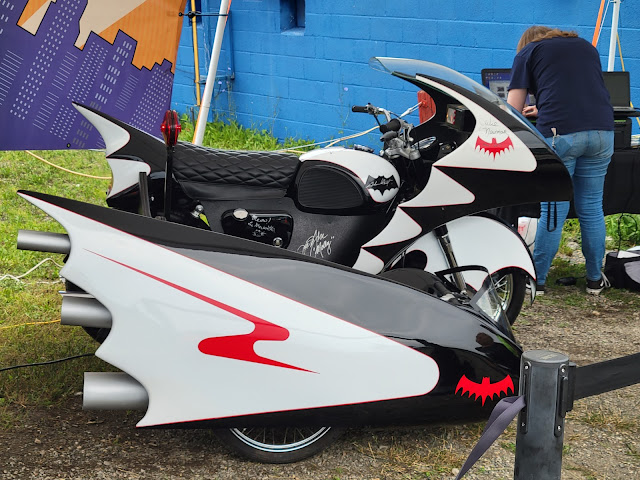 There was also a Batcycle on the lot, and it was pretty cool, but everything pales in comparison to the Batmobile! 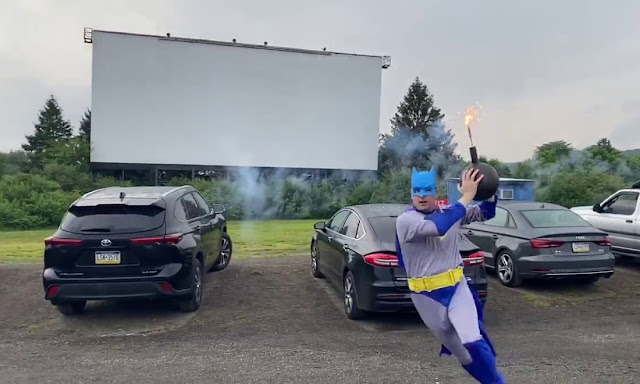 The only thing that could rival the awesomeness of the Batmobile was projectionist Rob frantically running around the lot in the rain to reenact the most memorable scene from the film that does not involve an explosive shark.  Some days, you just can't get rid of a bomb. 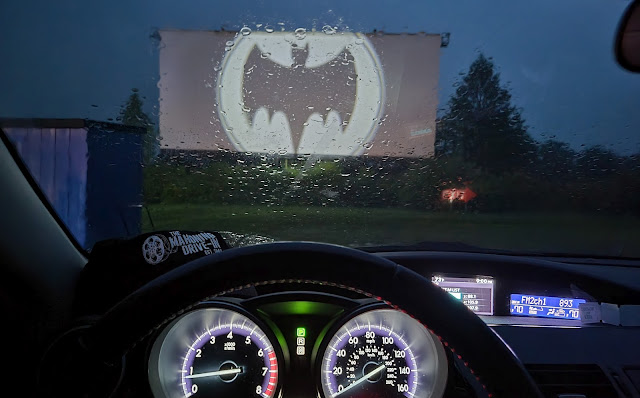 The bat signal was projected onto the screen before the start of the film while we did our best to stay dry in the car.  Virgil was the DJ for the night during the pre-show festivities.  He played a combination of 60's classics and Batman related tunes, so staying in the car while it rained didn't turn out to be so bad after all. 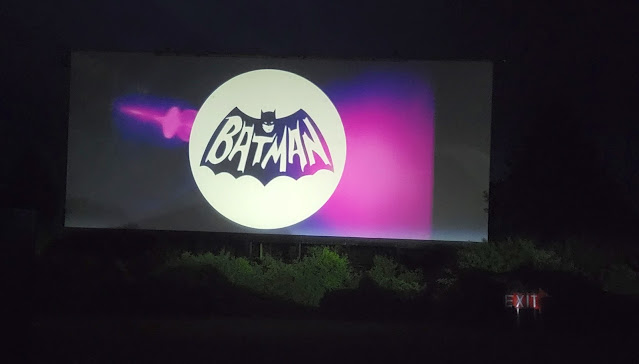 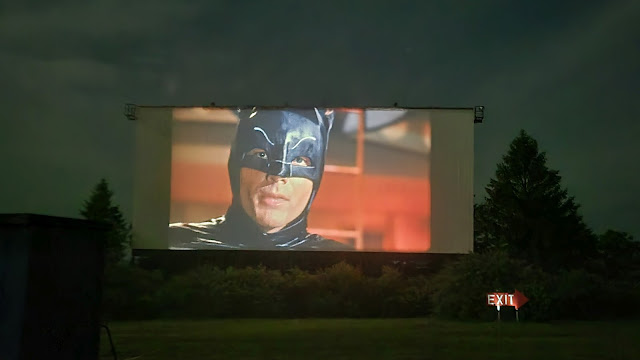 Last, but not least, there was a trailer reel of superhero movies from the 80's and 90's, followed by the Adam West classic on the big screen.  Just the latest in a long line of dreams that have come true at the Mahoning Drive-In Theater.