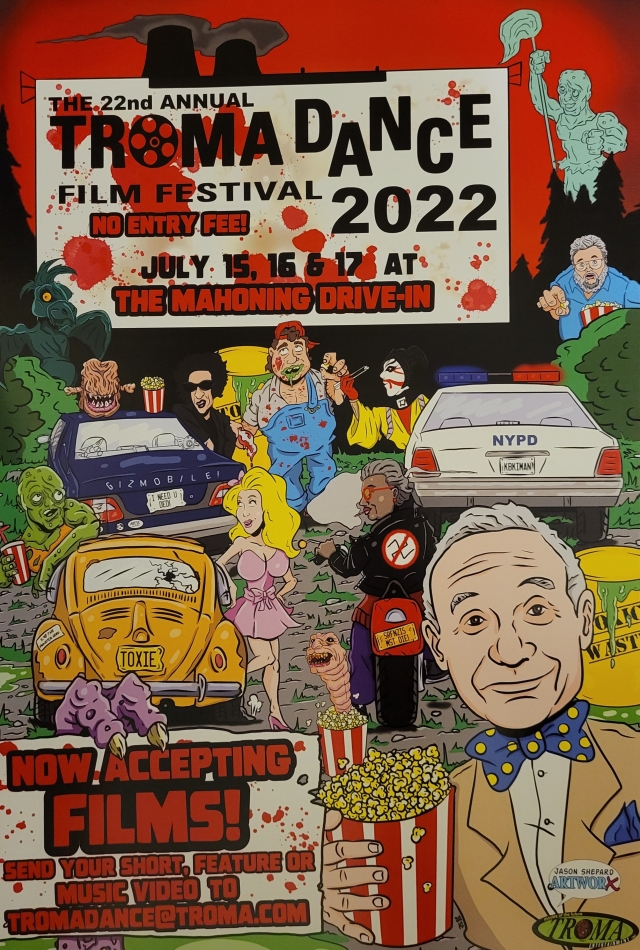 Troma-Thon '22: Night Two
The Toxic Avenger: Part I, II and III
Mahoning Drive-In Theater - Lehighton, PA
Before we discovered this place, I would have said that it wasn't too often that you get the opportunity to meet a filmmaking legend and watch a trilogy of cult classics from my childhood on the big screen under the stars.  However, it's become a pretty regular occurrence for me in the time that I've been coming to the Mahoning Drive-In Theater.  Still, I will never stop being amazed by this place and the experiences that it has given to me, and I will never take it for granted.  This place is magical, and I appreciate the hell out of every minute that we get to spend here. 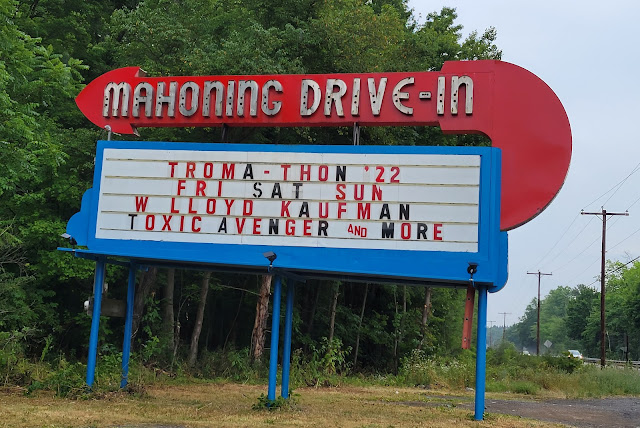 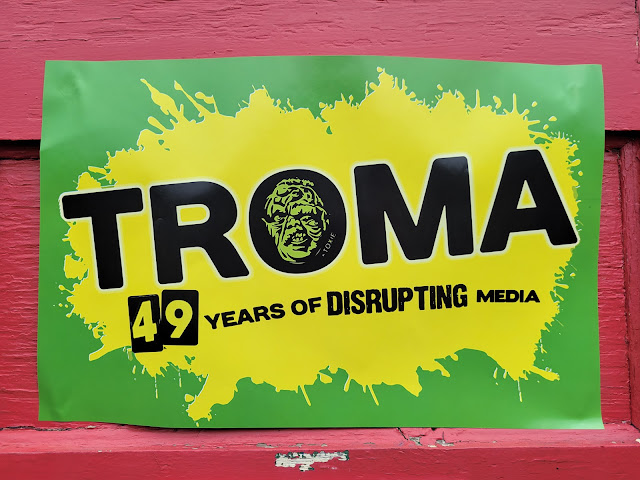 Troma Entertainment is in their 49th year in operation.  It's one of the world's longest running independent film studios, and writer/producer/director Lloyd Kaufman has been responsible for some of the most original and creative films I have ever seen.  My favorite of these is The Toxic Avenger, which has spawned a series of movies, an animated series, and will soon be the subject of a reboot starring Peter Dinklage in the title role.  Other favorites of mine from the Troma library include Tromeo & Juliet, Class Of Nuke 'Em High, Surf Nazis Must Die, Troma's War, and Sgt. Kabukiman NYPD. 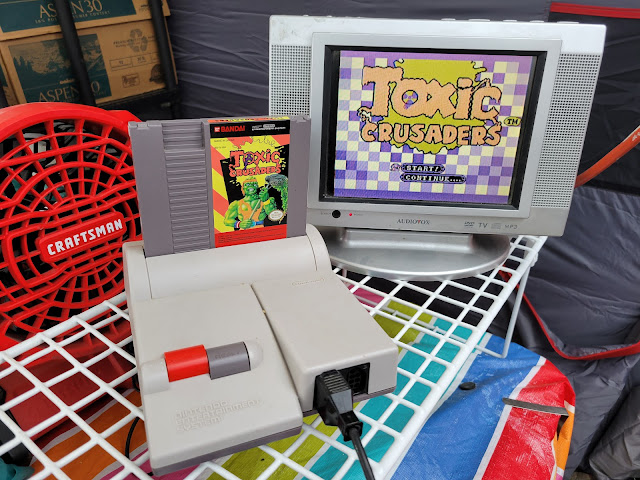 There were several tables set up outside of the concession building, including ones for the filmmakers whose work will be shown later today at the TromaDance Film Festival.  One of the the vendors had a setup to allow folks to play Toxic Crusaders on the NES.  It was released in 1992 in one of the final years of the console's lifespan.  I have never played it before now, and I'm glad to have had the opportunity to rectify that at Troma-Thon '22.  It's a sidescroll beat-em-up based on the Toxic Crusaders cartoon series from the early 90's.  The game has a similar style and level of difficulty as Battletoads.  I would have bought it, but it wasn't for sale.  However, after seeing what it sells for on eBay these days, it would probably be a smart idea to play it on the Everdrive instead. 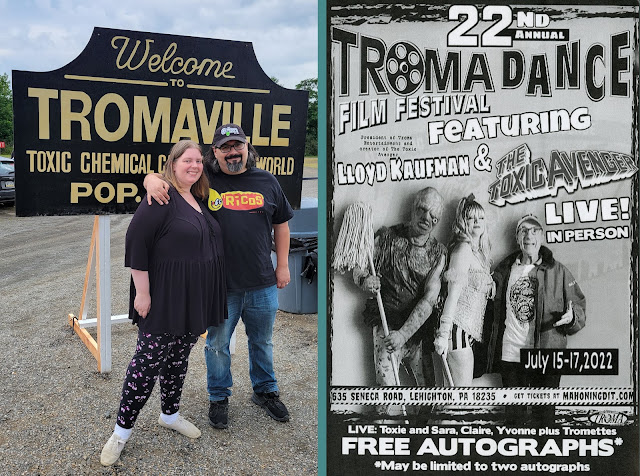 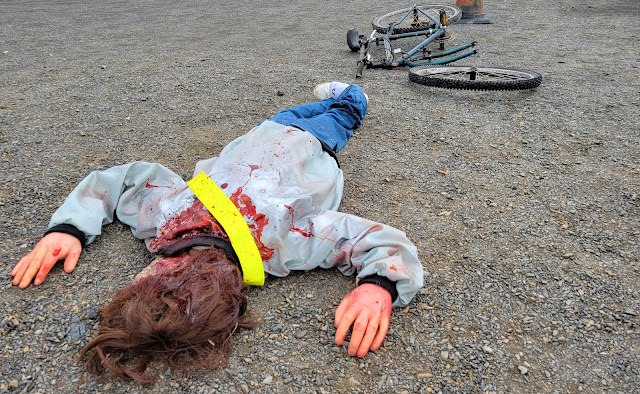 There were a lot of awesome photo ops set up around the lot as well, including the Welcome To Tromaville sign and Bozo's victim from the first Toxic Avenger film.  The best photo op came later in the night after Mr. Kaufman arrived. 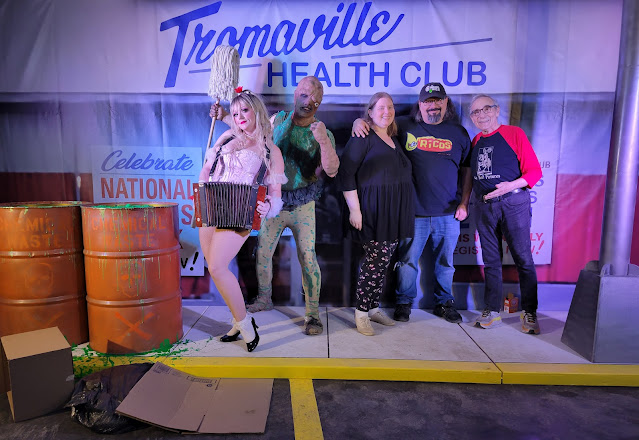 The staging area for the photo op was outstanding as always.  JT Mills does a fantastic job putting all of this together.  That's him in the photo as Toxie.  He's been working with Troma to make appearances as Toxie for a couple of years now.  He even starred as Toxie in a short film that was made for the Mahoning that aired during the pre-show.
Standing to my right is the man himself, Mr. Lloyd Kaufman.  He was an incredibly nice man, and someone who I have the utmost of respect and admiration for.  The line to meet him was massive, and he met each and every person who wanted to meet him to sign autographs and take photos. 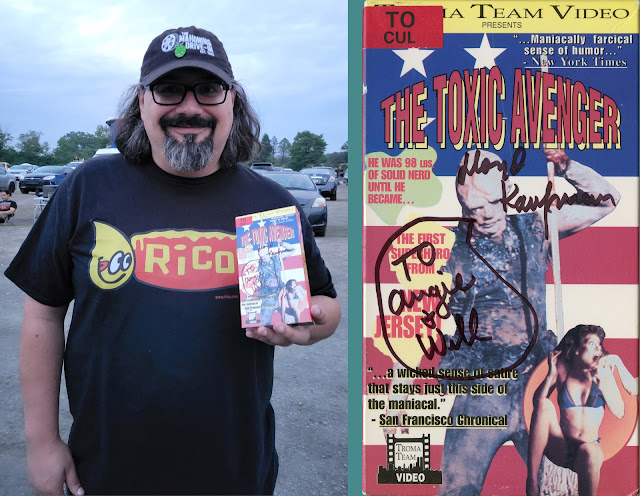 The Hollywood Video that was in West Hazleton sold off their entire stock of VHS tapes a couple of years after DVD took over as the standard format for rental shops.  If I remember correctly, the tapes were only a dollar each, and they got even cheaper after a few weeks.  They had an incredible selection, and I bought dozens of tapes, including this copy of The Toxic Avenger which Mr. Kaufman was kind enough to sign for us last night. 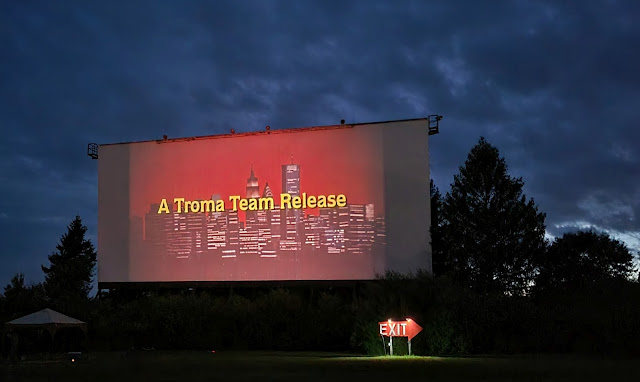 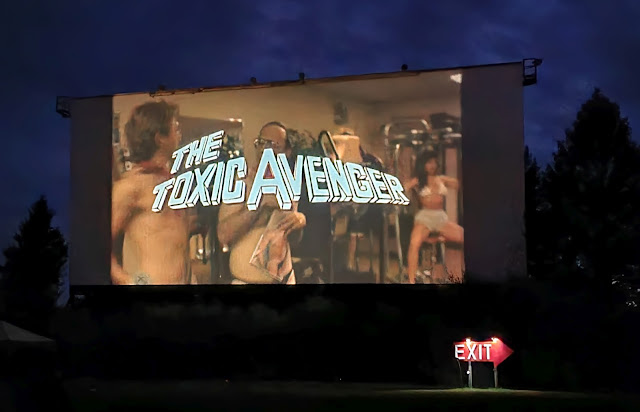 The triple feature of the first three Toxic Avengers movies began at around quarter after 9, starting with the original 1984 cult classic, The Toxic Avenger.  The first movie was screened from an original 35mm print, with the next two coming from the digital projection booth. 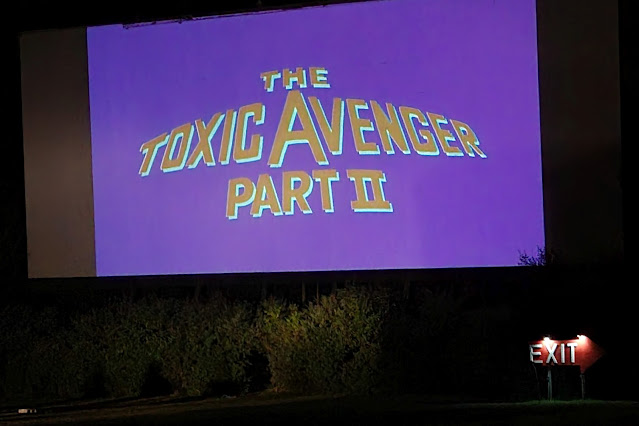 The Toxic Avenger Part II begins the story of Toxie's battle with the evil Apocalypse Inc.  Our hero goes to Japan in search of his father, Big Mac Junko, without knowing that Tromaville is being taken over in his absence. 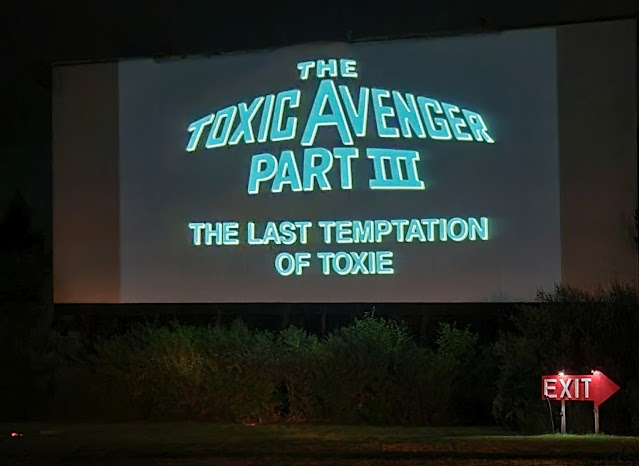 The final film of the night was The Toxic Avenger Part III: The Last Temptation Of Toxie.  It was made in 1989 at the same time as the second film in the franchise.  Mr. Kaufman's filming of The Toxic Avenger Part II resulted in a four hour cut, which was split up to make the movies that were released as Part II and Part III.  Because of this, the story directly picks up where the second film leaves off.  The chairman of Apocalypse Inc offers Toxie a job at a salary that would allow for his blinded girlfriend, Claire, to regain her sight.  As it turned out, he was making a deal with the devil (literally). 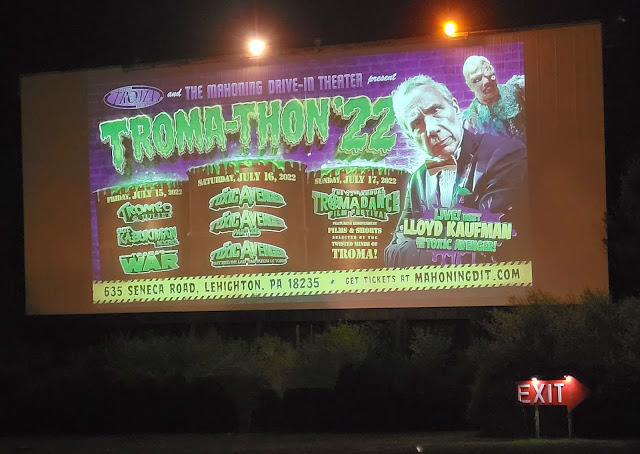 We only had tickets to Night Two of Troma-Thon '22.  If the size of the crowd we saw is any indication of the overall attendance, it was a very successful event.  I hope that they do it again next year.