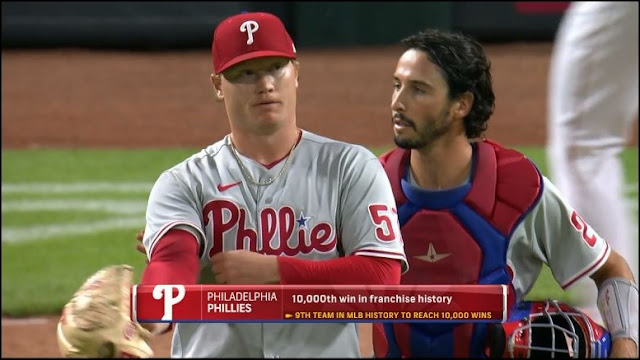 Relief pitcher Nick Nelson looks a little grouchy in this screenshot from the end of tonight's game.  He gave up a bloop single to Reds left fielder TJ Friedl in the 9th which allowed Cincinnati to tack on a run at the end of the game.  I respect the hell out of the dude for caring about his performance, but I hope he doesn't let it bother him for too long, because he just finished off a historic victory in the history of the franchise.  With tonight's 11-4 victory over the Cincinnati Reds, the Phillies have become the 9th team in the history of Major League Baseball to reach 10,000 wins as a franchise.
The media will be quick to remind you that this milestone is coming 15 years after the Phillies became the first team in MLB to reach 10,000 losses, but I'm not letting that get to me.  They're 65-51 midway through August and in the hunt for their first playoff appearance in over ten years.