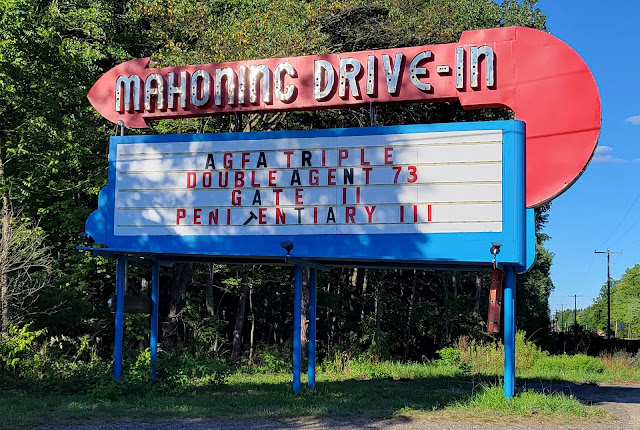 The American Genre Film Archive Triple Ripper
Double Agent 73 / The Gate II: Return To The Nightmare / Penitentiary III
Mahoning Drive-In Theater - Lehighton, PA
This is one of the of oddities that you can only get at the Mahoning Drive-In Theater.  It's a triple feature of a sexploitation flick from the mid 70's, a horror sequel from the early 90's, and a balls-to-the-wall prison flick from the mid 80's.  On the surface, these have next to nothing in common, but each of these movies bring their own flavor of weirdness to a night of madness that's custom made for the kind of folks who love the drive-in culture. 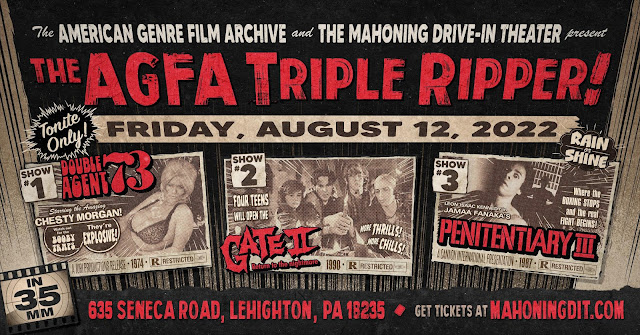 Ivan Peycheff from the American Genre Film Archive was in town to introduce the three films that were shown during the AGFA Triple Ripper.  He said that we'd start off weird and that it would only get weirder as the night went on, and that dude wasn't lying! 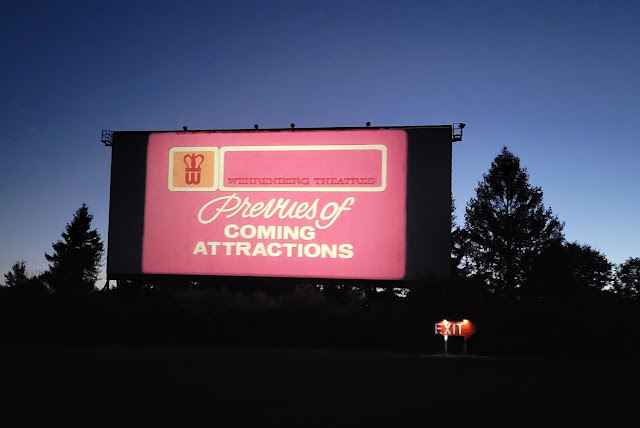 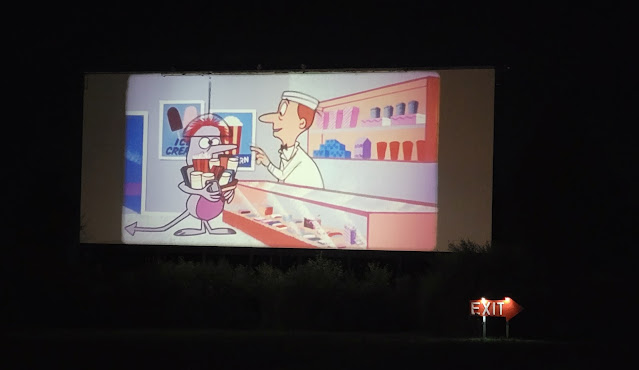 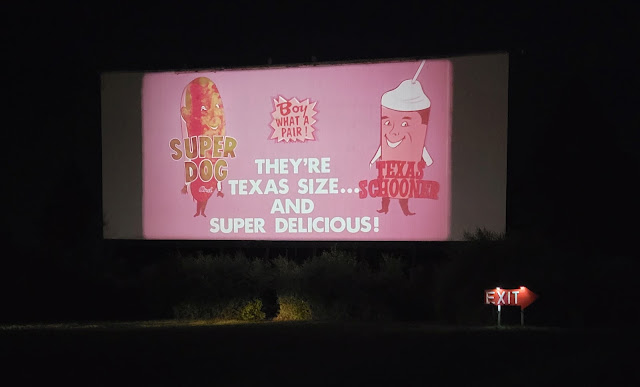 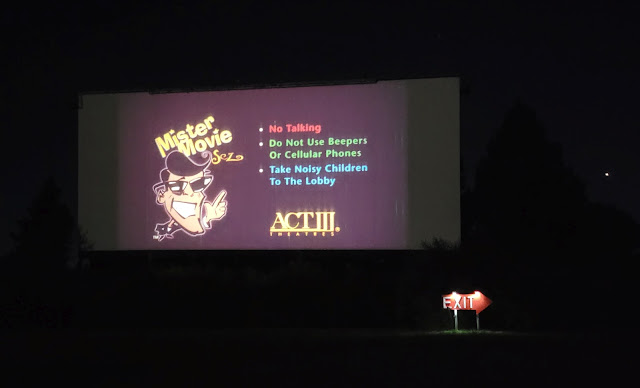 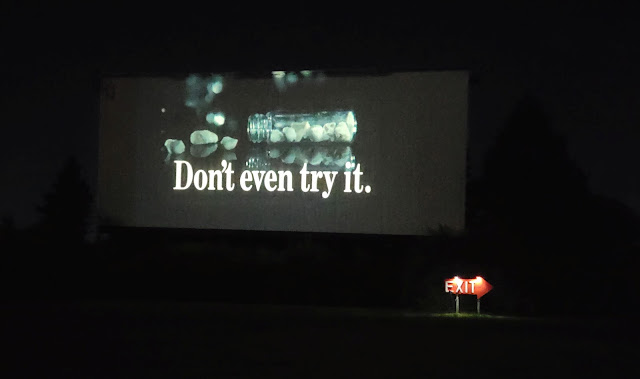 There were trailer and intermission reels played before each of the movies.  Some of these have played at the Mahoning before, but there were some that I saw for the first time, including a California Raisins commercial starring a claymation Michael Jackson, and Clint Eastwood scolding all of us on the dangers of smoking crack.  There were a few other oddities, including what I can only describe as a 35mm remix of a Jaws 2 trailer.  It was a fun experience for a night like this, but if I'm being honest, I prefer the way that the Mahoning and Exhumed Films puts together their trailer and intermission reels. 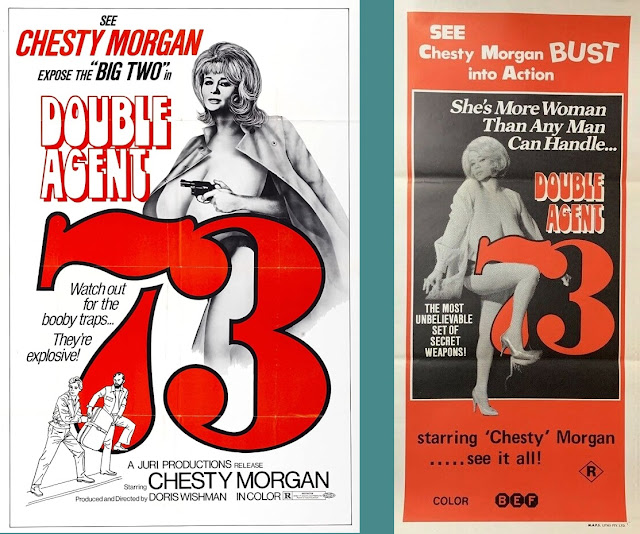 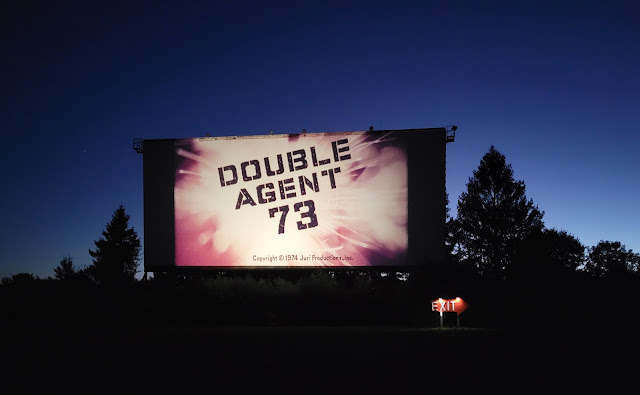 The first film of the night was Double Agent 73.  It was produced and directed by exploitation film legend Doris Wishman and stars Chesty Morgan, whose 73 inch bust size was written up by the Guinness Book of World Records as the largest on record for a film star.  This movie is an hour and 15 minute cheesefest with a story that's entirely built around Chesty Morgan as the titular Secret Agent 73 being put in situations where she has to take her top off.  She's been assigned to assassinate a gang of drug dealers and to take a picture of each one of them until the chief finds the leader of the gang with a scar on his face.  She takes out many of the gang members with her breasts, including knocking one out by swinging them at his head, and rubbing them down with poison and luring a drunken man into kissing them until he drops dead.  However, she has an excuse to whip 'em out even when they're not being used as a weapon because her agency has installed a camera in her left breast which she uses to take pictures of her victim.  I guess the Fun Saver hadn't been invented yet.
Now, I like breasts as much as the next guy, but there's not really much that I find sexy about this flick.  It's not that the star is bad looking or anything, but the acting is so ridiculous and the plot is so absurd that I can't imagine anyone getting turned on from this.  You'll be too busy laughing your ass off. 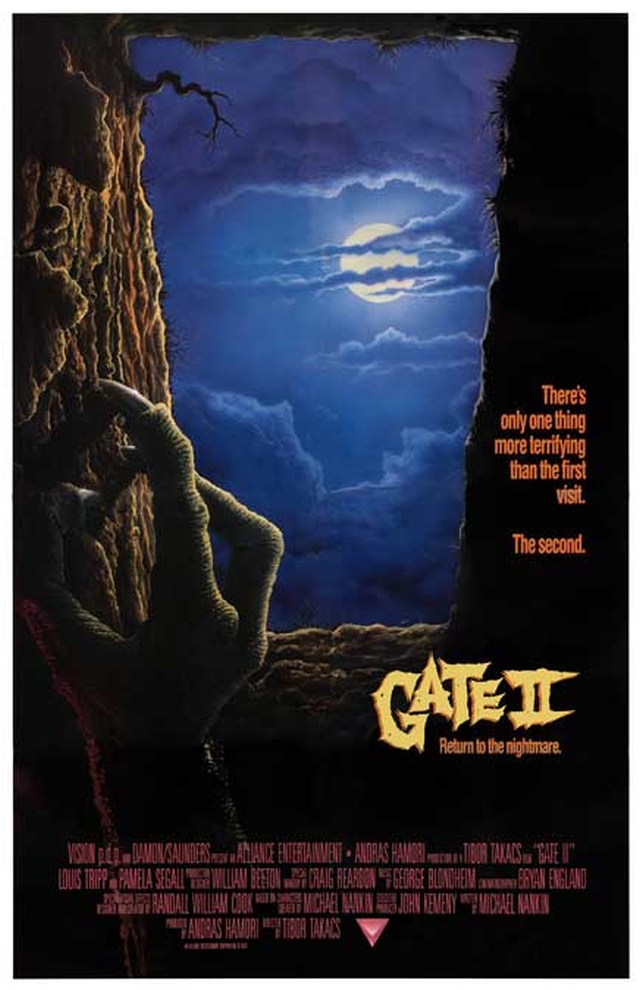 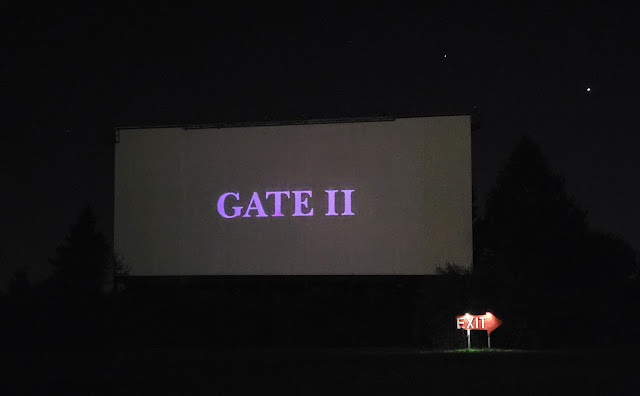 Next up was a horror movie from 1990 called Gate II: Return To The Nightmare.  It's a sequel to The Gate from 1987.  I've never seen either of them before, but The Gate is one of those movies that was in the horror section of just about every rental store I've been to when I was growing up.  I'm going to have to go back and check it out because the second one is a pretty damn entertaining flick!  It's about teenager who summons demons to use their power to help his father overcome alcoholism and get his life back on track.  He is interrupted by three other teenagers (two bullies and a girl who becomes his love interest) and chaos ensues. 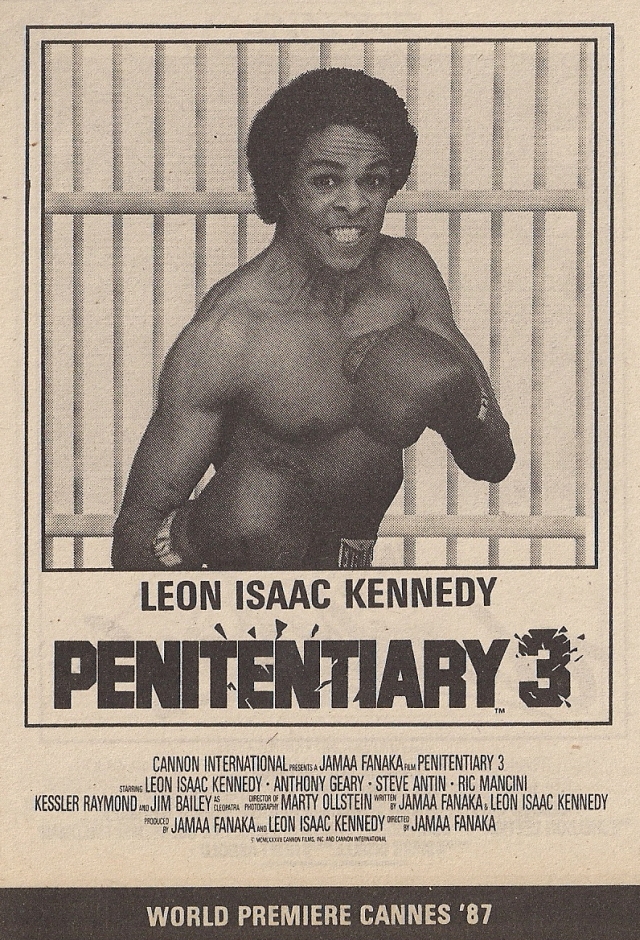 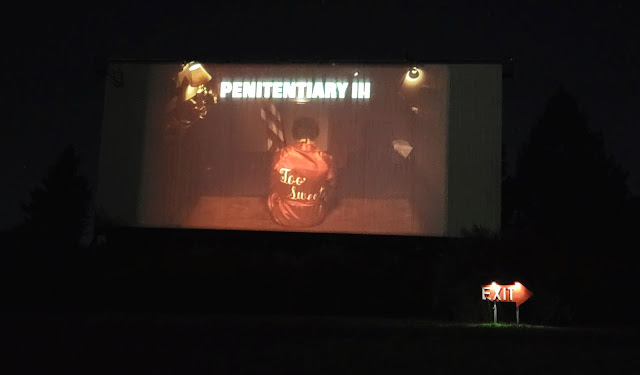 The final movie of last night's triple feature was my favorite movie of the night; a prison boxing movie from 1987 called Penitentiary III.  It's the third and final film in a series that includes Penitentiary from 1979 and Penitentiary II from 1982.  Leon Isaac Kennedy stars in all three movies as professional boxer Martel "Too Sweet" Gordone.
The final chapter of the trilogy that was screened at Triple Ripper is about an imprisoned crime lord named Serenghetti who wants Too Sweet to fight for his team in a prison boxing tournament.  In order to make that happen, he pays Too Sweet's corner man to spike his water with a drug that makes him stronger and more violent.  This results in Too Sweet killing his opponent in the ring, and manslaughter charges that put him behind bars.  Riddled with guilt, he refuses to fight and he suffers the wrath of Serenghetti.
When we were watching this, I thought that Serenghetti looked familiar.  At first, I thought he looked like a younger version of Jigsaw from the Saw movies, but it's not the same actor.  He was played by Anthony Geary, who is best known as Luke Spencer from General Hospital (he's the Luke in Luke & Laura), but the reason I recognized him is that he was Philo in UHF.  The movie also features former WWF wrestler The Haiti Kid as a psychotic kung fu expert who is brought in to kill Too Sweet, but who ends up being his trainer in prison.  It also includes a brief appearance by Danny Trejo as an inmate boxer named Severe.
I realize as I'm writing this that I'm making this movie sound like it's one of those "so bad it's good" kind of films, but it's a pretty great flick.  I've never seen the first two movies in the series, but if they're as entertaining as Penitentiary III, it's a solid trilogy that's worth checking out. 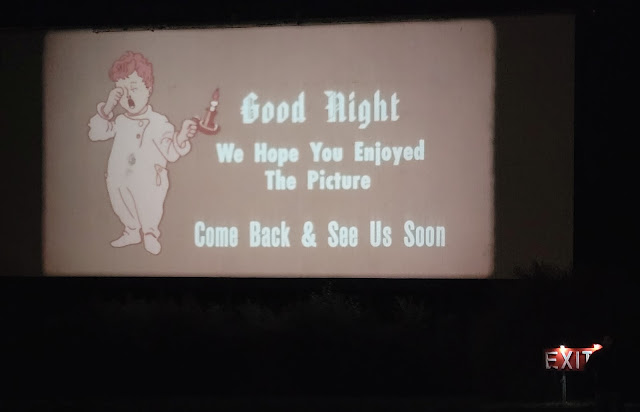 I'm hoping that this turns into an annual event at the Mahoning, but even if it doesn't, it was definitely a fun and memorable night, and between the trailers and the movies that came before the sequels that we got to see, it opened my eyes to a lot of movies to check out that I haven't seen before.