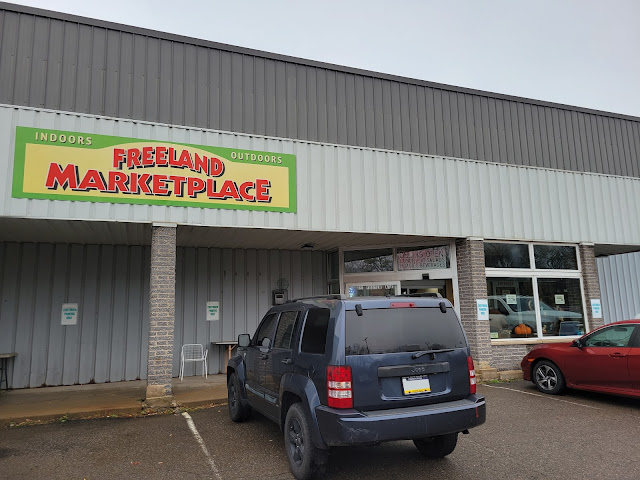 Freeland Marketplace
Route 940 - Freeland, PA
This was our first time visiting this place and it didn't disappoint.  It's a lot bigger than it looks on the outside and most of the prices were pretty reasonable.  There's even a little deli inside in case you want to stop and have a soda and a sandwich while you're shopping.  We're definitely going to have to pay this place another visit in the future, but until then, here are some of the more interesting things that we found on Sunday. 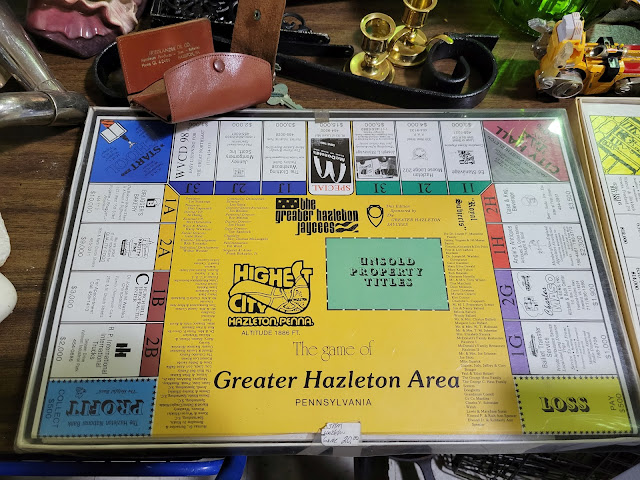 There was a time in the mid 90's that we saw hundreds of unofficial versions of the Monopoly board game available for sale.  If anything, I'm underestimating because just in my little corner of NEPA, I saw different ones that were based on communities, churches, hobbies and colleges, and if a small city like Hazleton had their own, there must have been hundreds of different versions of this game in Pennsylvania alone.
I kind of wish I would have bought this, and I'm probably going to if its still there the next time we visit the Freeland Marketplace. 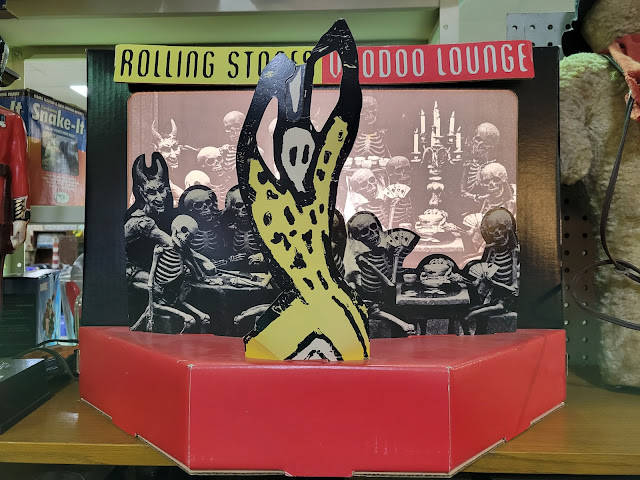 Voodoo Lounge was released in 1994 and is the 22nd studio album by The Rolling Stones.  I remember that I had this on CD a couple of years after it was released, but I'm not really sure how I got it because I know I didn't buy it.  It's an ok album... not bad by any means, but not really the kind of thing that I was into, then or now.  I wish that I liked the album more than I do, because this store display is amazing!  The light grey background is backlit, which gives it an eerie glow that is set off by the casino skeletons in the foreground. 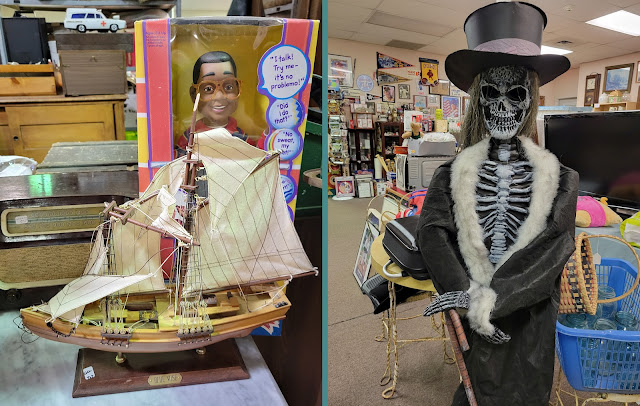 When I saw the talking Steve Urkel doll that's hiding behind the model ship in the photo on the left, I thought it would make a good prop for an eccentric weirdo to carry around everywhere he or she goes so that they could make the thing talk at inappropriate moments (which would pretty much be any moment).
The pimp skeleton on the right was tempting, but the last thing I need right now is more holiday decorations.  There was a sports memorabilia store at the back of this room that's run by an awesome older gentleman who happens to also be a Phillies fan.  We were there the day after the World Series, so we talked for about a half hour on the things that went wrong for the Fightins and how they could improve going into the 2023 season.  While we were talking, he called over another older man to come over, and he pointed at me when he introduced me and said "this guy knows his baseball".  There are few compliments that I've received in my life that can measure up to that! 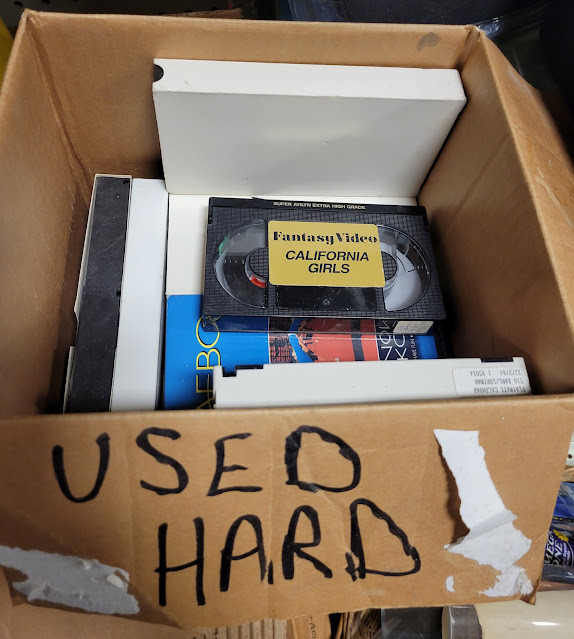 One of the more disturbing things I've seen in a while was a box filled with adult films and exercise videos (on VHS and Beta) in a box that has been labeled "Used Hard".  I bet they were, box guy.  Please excuse me while I bleach my eyes. 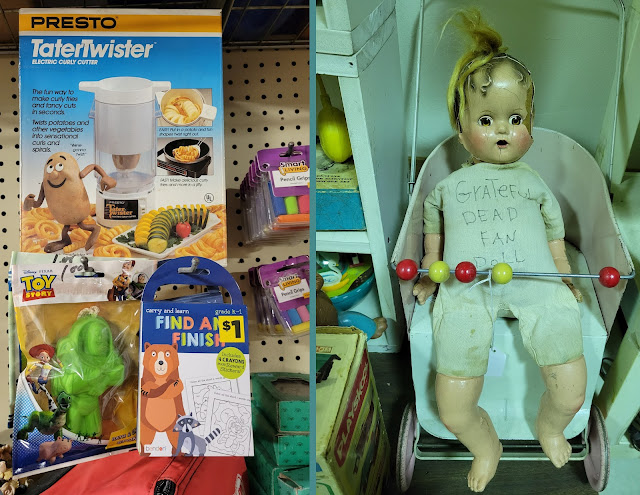 The little smiling potato who looks as if he's bending over for the Presto Tater Twister concerned me a bit, but this might have been aftershock from seeing the Used Hard box.  Just when I thought I was safe, I bumped into a homemade Grateful Dead fan doll with a cracked head.  Backing away now... 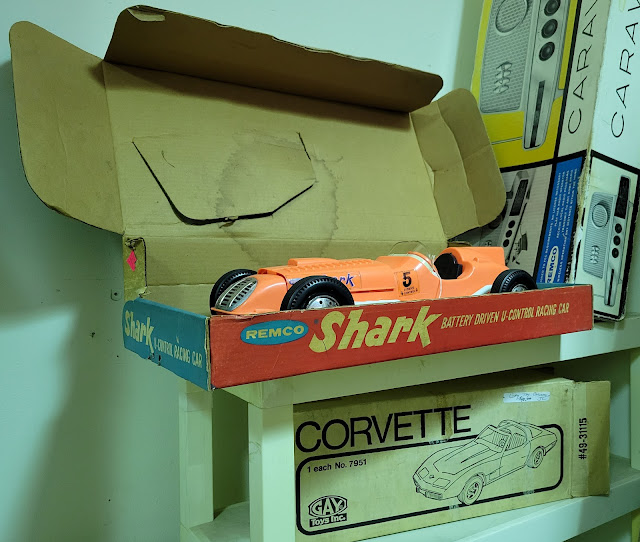 The Remco Shark is an interesting toy that I've never heard of before.  It's a car that runs on four D batteries, but it was sold in 1961, which is about five years before remote control cars were invented.  It was operated with a string that was attached to a control lever on the side of the car. 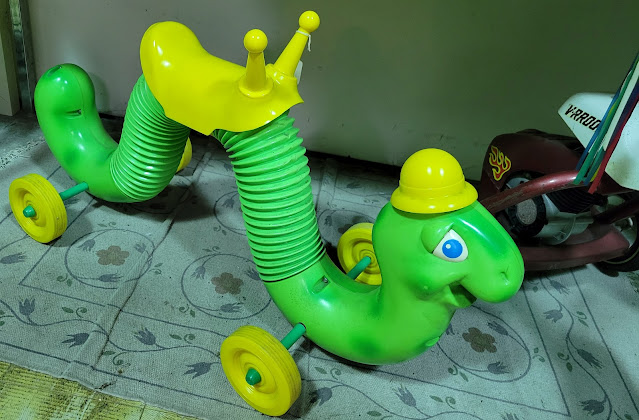 I don't know what this is called or how old it is, but it looks very familiar.  I think my dad had something like this when he was a kid and I inherited it when I was little. 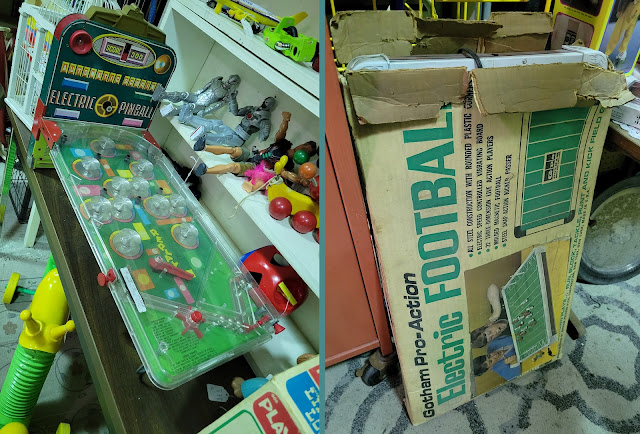 Speaking of toys that I inherited from my dad, he had one of these electric football games.  My grandparents kept it in their attic, and they brought it down sometimes when I came over to visit.  It's pretty much just a big metal football field with a surface that vibrated in such a way as to cause the little magnetic players to move around the field.  I didn't understand how to play it when I was a kid, and I don't really understand it now.
I never had an electric pinball game, but I was always obsessed with these things when I was a kid.  When I was little, I used to draw up plans to build my own pinball machine out of tinfoil and soda cans and other junk. 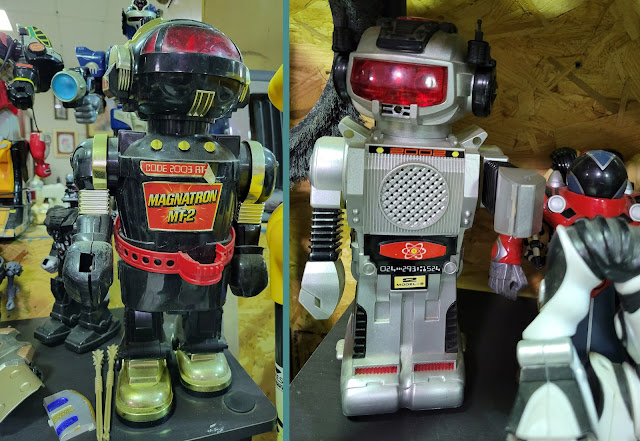 Another thing I was obsessed with as a kid was robots.  One vendor had a stand with at least a dozen different toy robots, and these two looked especially familiar.  I could swear that I had the grey one on the right, or one that looked a lot like it. 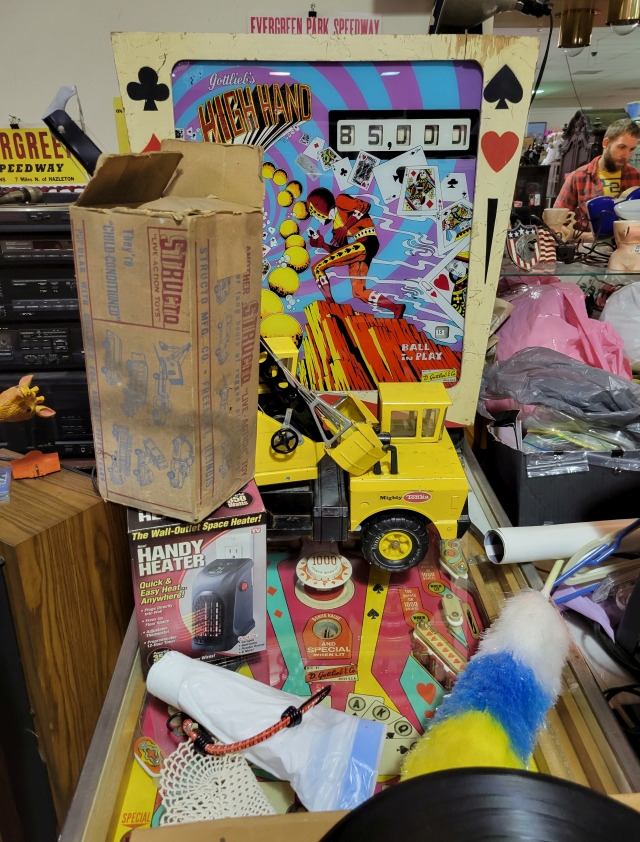 The coolest thing here was a 1973 pinball machine from Gottlieb called High Hand.  It was covered in random merchandise, so I couldn't see to much of it let alone play a game of pinball on it, but I'm hoping that they have it plugged in and ready to play the next time we're here.  I've always loved pinball machines.  I can't imagine that I'll ever have enough space or cash to actually own one of these, but they can be a hell of a lot of fun, and I try to play as many of them as I can.
We did pick up a few things here and at the Warehouse Shoppes last weekend, but I'll write more about those later.