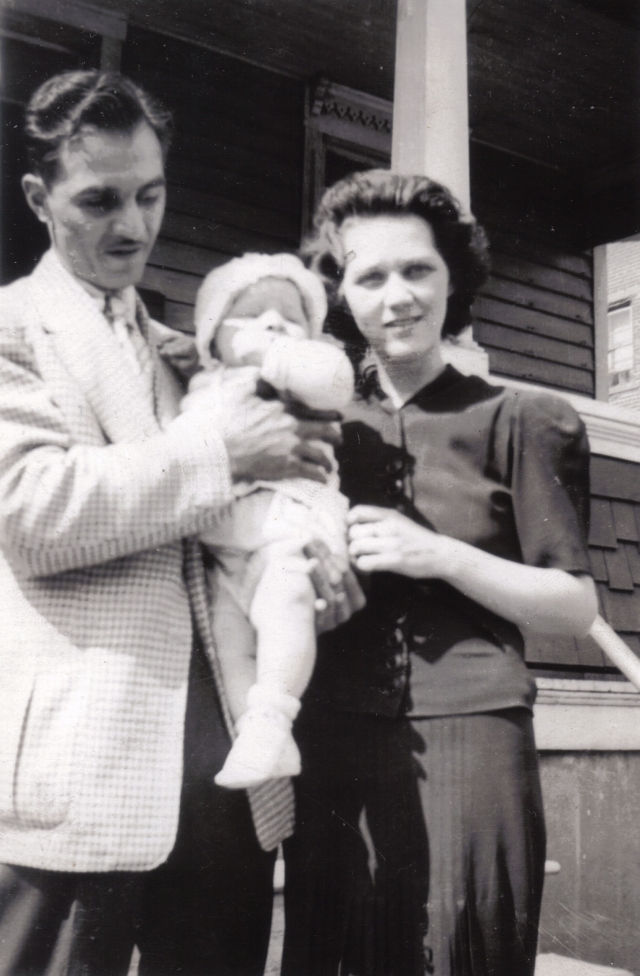 A couple of days ago when I was going through old pictures to find a few of my great-grandfather, Cosimo, I came across this picture of a couple that I didn't recognize.  I asked my grandmother about it and she told me that the man on the left was her uncle (my great-grandfather's brother) with his wife and baby.  Her uncle's name was Michael Scambia, but she said that everybody called him "Crazy Mike" or "Hard Luck Mike".  Oh really?  Please tell me more!
Over coffee at the dinner table, my grandmother told me about how Mike lost an eye lighting fireworks for a bunch of kids, but that wasn't the only incident that earned him the nickname.  There was another situation that happened when a woman in town was sitting on a horse that went a little wild and started running on its own.  The way my grandmother put it is that Mike must have seen one too many cowboy movies, because he got in front of the path of the charging horse, held out one hand and shouted "Whoa!".  The horse didn't even slow down and trampled over Mike in the process, which sent him to the hospital.
Last, but certainly not least, Grandma told me about his car accidents.  She didn't know all of the details, so I don't know who was driving, what caused the accident, or who was to blame.  What she did remember is that it was a serious enough accident that he had to be taken to the hospital - which is what would have happened, except for the fact that the ambulance was also in a very serious car accident after they picked Mike up.  He eventually did get to the hospital, and he was there for quite a long time recovering from whatever injuries he sustained.  Finally, he was released from the hospital, and on the way back home, the car he was riding in was involved in another very serious accident.  At least this time, the ambulance got him back to the hospital without any further vehicular incidents.