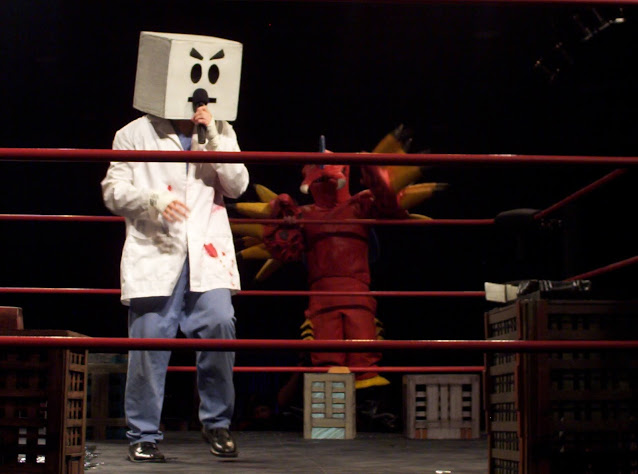 Chikara: Anniversario!
New Alhambra Arena - Philadelphia, PA
The second Chikara anniversary show was held at the former ECW Arena in South Philadelphia, and it featured a special guest that was not at yesterday's show in Hellertown.  They're called Kaiju Big Battel, and they're an absolutely brilliant group of folks whose shows are a blend of pro wrestling and a live-action Godzilla movie.  I'm going to have to write more about them in the future because they're absolutely insane in the best possible way!

If you enjoy professional wrestling and you've never watched one of their shows before, I highly recommend Chikara.  They're a blend of comedy and lucha libre that is unlike anything I've ever seen in any other promotion.  Some of the performers on the show are not too many years removed from their training, so they're still learning and the occasional botch does happen, but their enthusiasm and their willingness to try new things to get over more than makes up for it.  However, not everyone on a Chikara show is a rookie, as many of the wrestlers on their show are veterans of the business who train the younger stars of the future. 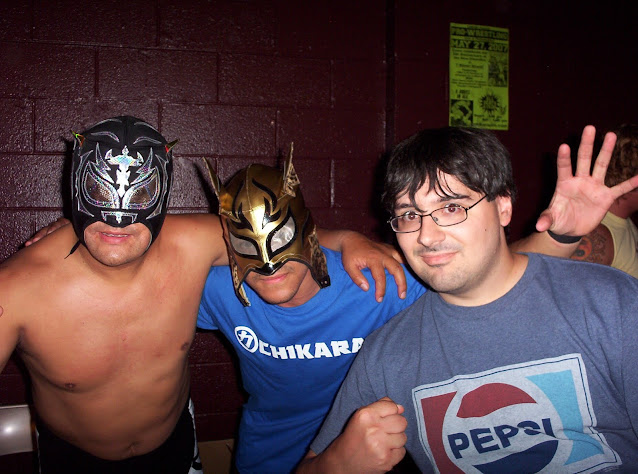 This photo from the merch tables at intermission yesterday is the perfect example of what makes Chikara great, and not because of me looking super nerdy in the Pepsi shirt.  On the left is El Pantera, who has been one of the most traveled and well respected luchadores in the world for over twenty years.  If you watched WWF in the late 90's, you may recognize him from their Light Heavyweight division.  The man in the center is Lince Dorado.  He turned 20 years old earlier this month and had been training to become a professional wrestler in Mexico with El Pantera as his teacher and mentor.  He's been wrestling for Chikara since February of this year with most of his matches including El Pantera, or veteran luchador Sicodelico Jr.  If the past two nights are any indication, Lince has a very bright future. 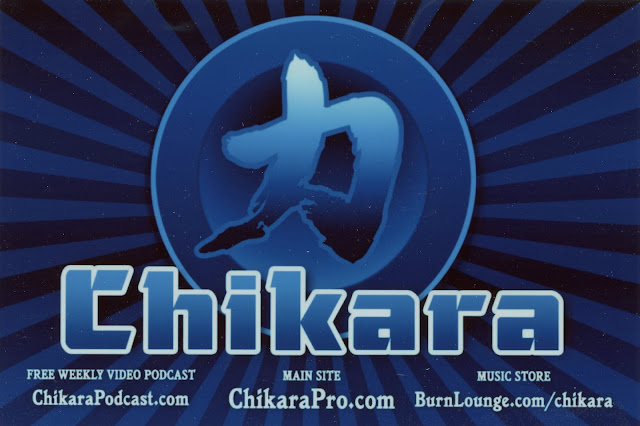 The main event was kind of a civil war between members of the same group.  To understand the story, it's important to know that while The Kings Of Wrestling are a tag team in ROH and CZW, they're a much larger group in Chikara.  The larger group includes the tag team of Chris Hero and Claudio Castagnoli, as well as "Sweet & Sour" Larry Sweeney (presently the manager of Chris Hero in ROH as part of the Sweet & Sour Incorporated group).  The Kings Of Wrestling also include Young Lions Cup winner Max Boyer, veteran wrestler "Marvelous" Mitch Ryder, "The Kentucky Gentleman" Chuck Taylor, and the tag team of Icarus and Gran Akuma who are collectively known as Team FIST (which stands for Friends In Similar Tights).  It's a pretty big group.  Anyway, there was a battle between two different sides for supremacy, with Team FIST, Chuck Taylor, and Max Boyer on one side and Chris Hero, Claudio Castagnoli, Larry Sweeney and Mitch Ryder on the other.  The younger team won (Icarus, Gran Akuma and Chuck Taylor), but they all came together and remained friends when the match was over.
Results: