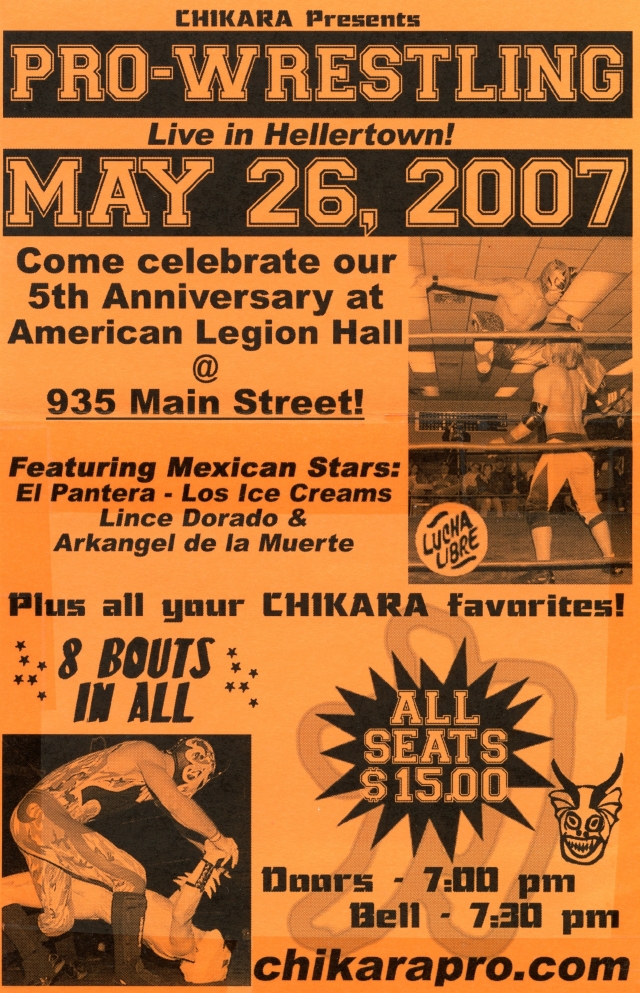 Chikara: Anniversario?
American Legion Hall - Hellertown, PA
The Chikara Anniversary Show weekend is taking place this year across two shows.  The first show was earlier tonight in Hellertown, and the second is tomorrow at the old ECW Arena in Philadelphia.  We have tickets for both shows, and the first night did not disappoint.

During intermission, a bunch of folks from the roster came out to the merch tables to meet with fans, sign autographs and take pictures, so of course I had to get a few nerdy photos with some of the wrestlers at tonight's show. 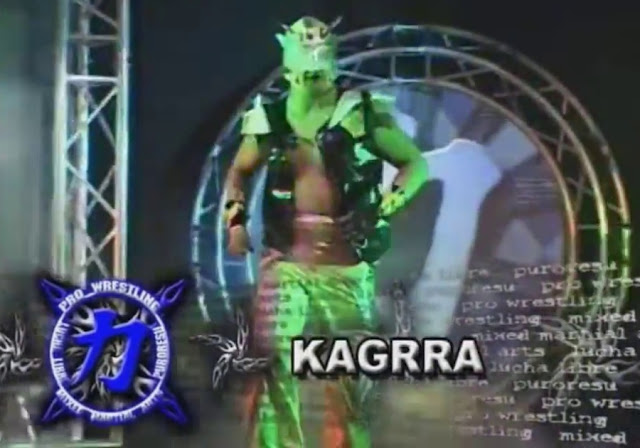 One last wrestler from this show that I feel like I have to mention is Kagrra, because he is an absolute mystery to me.  First of all, I know that he's not a figment of my imagination.  I watched him wrestle at the "Anniversario?" and "Anniversario!" shows on May 26th and 27th, 2007.  He's on the DVD release of the show.  Hell, I met the man during intermission of the Hellertown show and he took a photo with me.
I also know that Kagrra was visiting the United States from a promotion called Pro Wrestling Kageki that is based in Fukuoka, Japan.  I was able to find a lot of information about many wrestlers that worked in this company, including Dragon Yuki, who is also on both of these shows.  He was in a tag team match alongside Kagrra on the 26th and he wrestled against him on the 27th, so I know this isn't a situation like Jimmy Olsen wrestling in a tag team match, only to come right back out for the very next match under a mask and calling himself Equinox.
When I researched all of the wrestlers from this show to see what they're doing today, I found a lot of information for all of them... except Kagrra.  In fact, the only time I saw his name mentioned at all was in references to these two shows.  The Internet Wrestling Database has a profile for him, but the only matches that are listed are the May 26th and 27th, 2007 shows from the Chikara anniversary weekend.  So, I'm guessing that either one of two things happened:  either Kagrra changed his gimmick and no one ever thought to associate his new character with the one he used in Chikara, or he spent all that time training in Japan only to wrestle two matches in Pennsylvania and then retire from the business forever.  The first option seems more likely, but it's been over 13 years since this show.  You'd think that there would be someone out there who would have added a footnote that said "Hey, Wrestler X once went by the name Kagrra on a tour of the United States".  If I ever find out the answer, I'll add a second update to this post.  If you're reading this and you know who this dude is, by all means, please reach out to me on Twitter and let me know.