The Last Of A Dying Breed 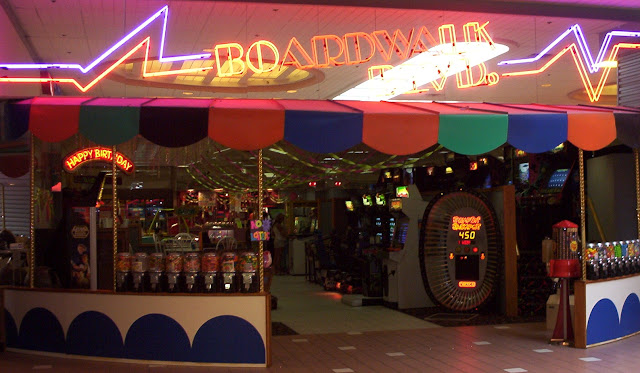 Boardwalk Boulevard
Laurel Mall - Hazleton, PA
When I think of arcades in Hazleton, the first thing that always comes to mind is Aladdin's Castle.  Boardwalk Blvd. opened in 1989 in the same mall and pushed Aladdin's Castle out of business within a short amount of time.  I wasn't happy about it.  Where Aladdin's Castle focused on pinball and traditional arcade games, Boardwalk Blvd had a lot of ticket games and kiddie stuff.  I played the occasional Skee Ball here, but that was pretty much it.

I spent a lot of time here as a teenager during the Mortal Kombat / Street Fighter II arcade renaissance of the mid 90's.  At the time, there was a two player sit-down Daytona USA machine at the entrance on the right hand side, right next to Mortal Kombat II, so the intense battles on the joystick were always accompanied by the Daytona music.

The arcade has a second floor on the far right hand side.  It has a few retro games, like Super Sprint and Ms. Pac Man.  There was also an X-Men vs Street Fighter game there that I used to play on my lunch break when I worked at K-Mart in the late 90's.

These days, the arcade is nearly empty almost every time I go to the mall, but it's still chugging along.  I imagine they get a fair amount of birthday party business that keeps them going.  I was a bit grouchy about it when it first opened, but I'm glad that it's still here after all these years.