My Introduction To Independent Wrestling

IPW: January 30, 1999
YMCA - Freeland, PA
It occurred to me when I was writing about the Chikara Young Lions Cup V shows that I had been following the career of Mike Quackenbush for nearly ten years despite never seeing him on television.  That got me thinking about the first indie wrestling show that I'd ever been to.  It was an International Pro Wrestling show at the YMCA in Freeland, Pennsylvania that I learned about from this article from the Standard Speaker newspaper a few weeks before the show.
In addition to Quack, this is a show that included two legendary pro wrestling managers of the 80's and 90's, a tag team that once held the ECW and WCW Tag Team Championships, a WWF wrestler who appeared on just about every show I ever watched when I was a kid, and three wrestlers who would go on to appear in the final episode of ECW Hardcore TV. 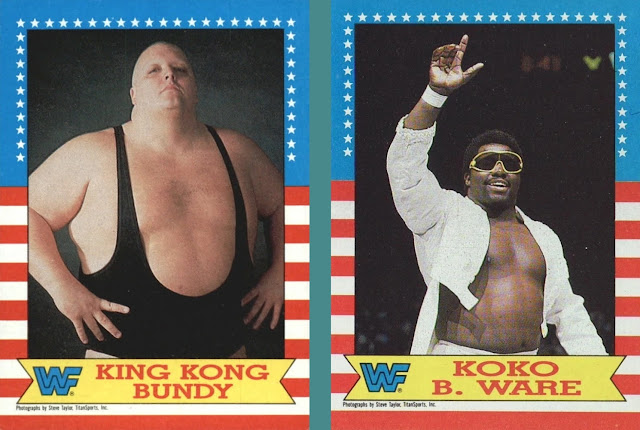 King Kong Bundy was advertised on the show to challenge Tom Brandi for the IPW Heavyweight Championship.  Bundy had long been one of my favorite wrestlers from his days on Saturday Night's Main Event, and his main event steel cage match against Hulk Hogan at Wrestlemania 2.  At the time of this show, it had been less than four years since he was appearing regularly on Monday Night Raw as a member of The Million Dollar Corporation, managed by Ted DiBiase.  I'm not sure what happened, but he didn't end up wrestling at this IPW show on January 30th, 1999.
Bundy was replaced in the championship match by Koko B. Ware.  Don't get me wrong, I loved Koko and his bird Frankie when I was a kid, and I was happy to have the opportunity to see him wrestle in person; however his match with Brandi was odd because Koko worked as a heel with fellow WWF alumni Harvey Wippleman as his manager.  Throughout his run in the 80's and 90's, Koko had always been a good guy, and without knowing any of the storylines that IPW had going at the time, it was pretty weird seeing him taunt the crowd and try to get booed.  It was a fine match, but definitely a strange experience. 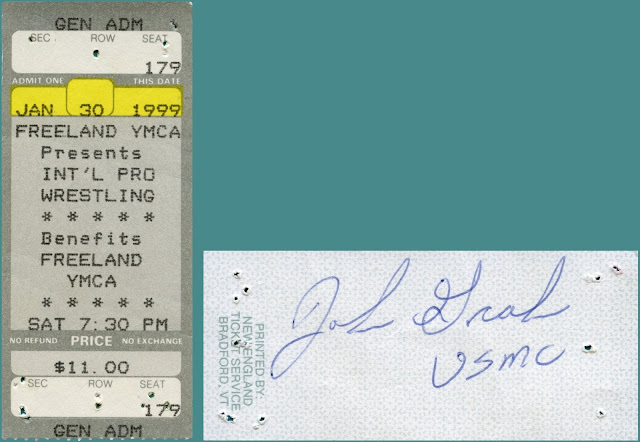 The opening match on the night was between Johnny Graham and Maxx Crimson, the latter of whom was accompanied to the ring by his manager, Jim Cornette.  I met Mr. Graham during intermission and he signed the back of my ticket stub.  He was a very nice man and asked if I was enjoying the show, which I definitely was.  His character in the ring was a patriotic good guy who was also a member of the US Marines.  According to a biography I found online, this wasn't just a part of his gimmick.  Mr. Graham began his service in the United States Marine Corps in 1978 and started training for a career as a professional wrestler in 1987 with NWA affiliate World Pacific Wrestling in Hawaii, which was run by The Rock's grandmother, Lia Maivia, and he's still wrestling on the indies to this day (mostly for PWE and CPW).  He won the opening match at this show with his finishing move, the Graham Cracker, which is still one of the best names for a finisher that I've ever heard. 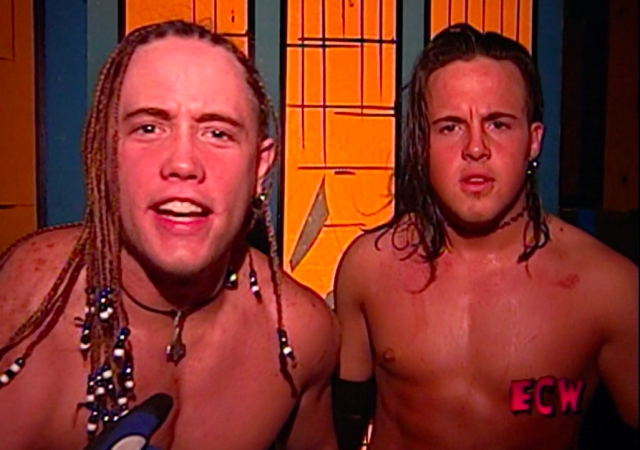 One of the best matches of the night was between Christian York (left) and Joey Matthews (right).  I had never heard of either of them before this show, but they were both young, athletic guys who delivered a fast-paced cruiserweight style match that would have fit in perfectly on an episode of WCW Monday Nitro.
I learned later that these two had been touring the independents for quite a while, both as opponents and as a tag team.  They signed with Extreme Championship Wrestling about a year and a half after this IPW show, and they remained on the ECW roster until the promotion folded in January 2001.  They teamed up for tag team matches in most of their appearances, but Christian York wrestled in a singles match against Jerry Lynn in the final episode of ECW Hardcore TV which aired on December 30'th, 2000.  Joey Matthews accompanied York to the ring and didn't wrestle that night, but he went on to greater success after signing with WWE where he wrestled as Joey Mercury and is a three-time tag team champion as a member of MNM with Johnny Nitro. 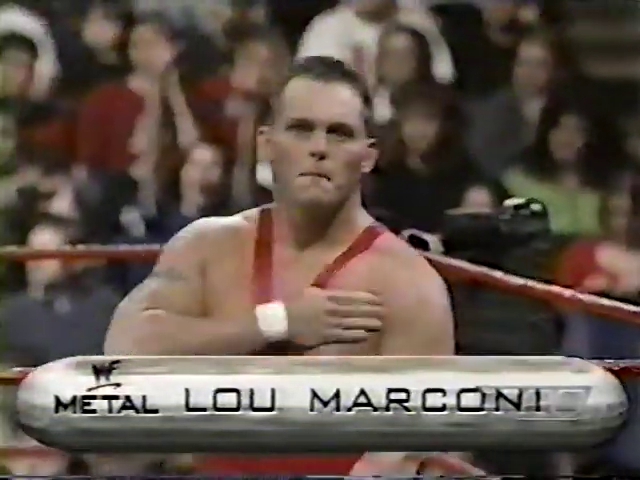 The wrestler who faced Mike Quackenbush at IPW was "Beef Stew" Lou Marconi, which is one of the greatest professional wrestling nicknames I've ever heard.  He had already wrestled for the World Wrestling Federation and Extreme Championship Wrestling before I saw him.  He was mostly used as enhancement talent for both companies, but his list of matches includes two appearances on WWF Superstars where he wrestled in a WWF Tag Team Championship match; first in 1994 against The Headshrinkers, and again two years later against The Smoking Gunns.  His tag team partner for that second match was Frank Stalletto, who wrestled in the main event of this IPW show.  He's wrestled quite a few other high profile opponents, but the highlight of his time in the WWF was a 1996 match with "Stone Cold" Steve Austin.

The IPW Heavyweight Champion Tom Brandi defended his belt against Koko B. Ware in the second to last match on the card.  Brandi is a veteran who has wrestled just about everywhere in his career, with time spent in WCW (as Johnny Gunn), ECW (as Tom Brandi) and WWF (as Tom Brandi and Salvatore Sincere).  He has also appeared many times as The Patriot, including at the Chikara King Of Trios earlier this year.  This is where I met him, and he was a heck of a nice dude. 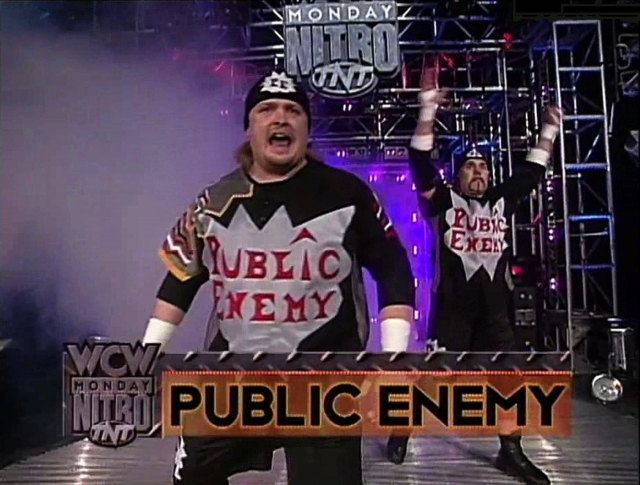 The main event was a tag team match featuring recent ECW and WCW Tag Team Champions, "Flyboy" Rocco Rock and Johnny Grunge, collectively known as Public Enemy.  I was fortunate enough to be able to meet both of them during intermission and to have a Polaroid taken with both of them in the ring, which the two men autographed at the bottom.  I know I still have it somewhere, but I wasn't able to find it when I started writing this.  I remember that I was wearing my Jesse Ventura - Retaliate In '98 campaign shirt because Johnny pointed it out to Rocco and said it was cool, which totally made my day!  When I find the picture, I'll scan it and add it to this post.
Wrestling was red hot in the late 90's with the WWF Attitude Era and the ratings war between WWF Monday Night Raw and WCW Monday Nitro was in full effect.  The business hadn't been this popular since I was in elementary school in the mid to late 80's when Hulkamania was running wild.  It's probably not too surprising then that the crowd at this show was largely made up of young children who were around elementary school to middle school age, most of whom had probably just started to get interested in pro wrestling with the rise of "Stone Cold" Steve Austin, The Rock, and Bill Goldberg.  At 18 years old, I was probably the oldest person in the audience who hadn't come with a son or daughter or a younger sibling.
Either Public Enemy themselves or the promoters of the show must have taken notice of the number of young children in attendance and booked the main event for them.  A big portion of the match had Rocco and Johnny calling their opponents chicken.  This led to the tag team calling every kid in the building to ringside where they led the children to follow them, single file, as they ran around the ring flapping their arms and clucking like chickens to taunt the villains.  Anybody who has ever watched The Public Enemy wrestle on television will tell you that this is uncharacteristic of them.  These are the same two guys who would introduce themselves to ECW crowds by dropping f-bombs before wrestling a bloody match where they put their opponent through tables (a gimmick that their former ECW colleagues, The Dudley Boys, completely ripped off when they went to the WWF), so I wouldn't doubt for a second that someone called an audible and decided to put on a more family friendly main event than the kind of match that put them on the map.  It made me respect them, and the company, even more.  Sure, the 18 year old me would have loved to see the four-time ECW Tag Team Champions put their opponents through a table, but they read the room and they instead delivered a match that was appropriate for the fans in attendance, and that no doubt gave each of them a lot to talk about the next day in school.
Shortly after this show, The Public Enemy signed with the World Wrestling Federation, but their stay was very short and they were treated anything but fairly.  They returned to WCW by the summer of 1999, and were back on the independent wrestling scene after both WCW and ECW closed and were absorbed by the WWF.
Sadly, both members of The Public Enemy have since passed away.  Rocco Rock was 49 years old when he died of a heart attack less than three years after this show.  Johnny Grunge passed away in February of last year due to complications from sleep apnea, but he was much younger than his tag team partner and was only 39 at the time of his death.

The target of the chicken clucking mockery in the main event was The Bounty Hunters, a tag team made up of Frank Stalletto and Julio Sanchez.  As far as I know, Stalletto and Sanchez didn't frequently team up as The Bounty Hunters, so this might have been a one-night-only type of deal.  Like Lou Marconi, Frank Stalletto had frequently worked as enhancement talent in the WWF with appearances on Monday Night Raw and Shotgun Saturday Night in matches against Vader, Yokozuna, Road Dogg, Crush, and The Legion Of Doom.  Also like Lou, he's been a part of two televised WWF Tag Team Championship matches.  Both took place on episodes of Superstars Of Wrestling in 1996: once against The Smoking Gunns on August 20th, and again on the October 22nd against Owen Hart and The British Bulldog.
Julio Sanchez also worked as enhancement talent for mainstream promotions before this show.  He appeared on both WWF and WCW programs many times under the names Julio Sanchez and Julio Fantastico.  He got his big break in the unlikeliest of places eight months after this show when he wrestled against 2 Cold Scorpio in the only good match on the horrendous Heroes Of Wrestling pay-per-view.  Shortly afterward, he signed with Extreme Championship Wrestling where he changed his name to Julio Dinero and joined with EZ Money to form the tag team Hot Commodity.  He remained with ECW until its end, and like Joey Matthews and Christian York, he appeared on the final episode of ECW Hardcore TV.  After ECW closed its doors, he signed with TNA shortly thereafter where he was a member of Raven's faction, The Gathering. 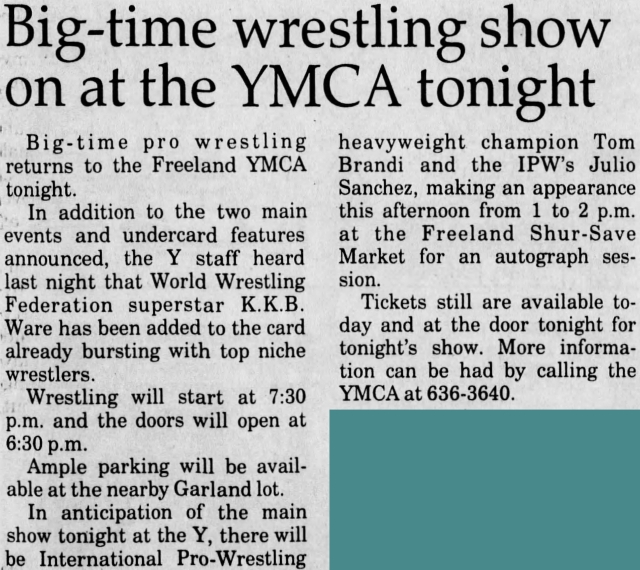 It may not have been a night of five star classics that set the internet wrestling community on fire, but this was a very special night for me.  This show wasn't more than just a fun night.  It opened the door for me to a whole new world of professional wrestling that I hadn't really know about before.
Results: