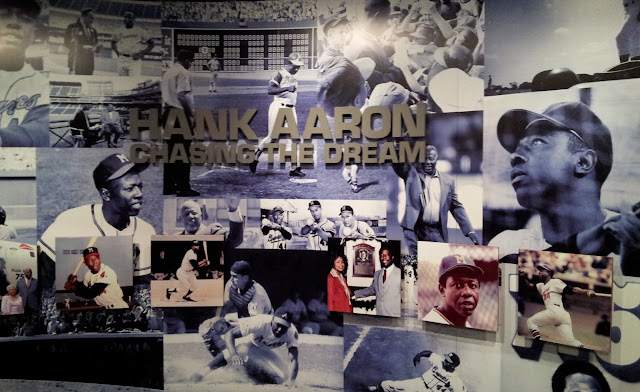 Hank Aaron: Chasing The Dream
National Baseball Hall of Fame and Museum (2013)
The Hall of Fame has an entire wing dedicated to the man who I believe to be the greatest baseball player who ever lived: "Hammerin" Hank Aaron.

Hank Aaron should have been the first person to be unanimously inducted into the Hall Of Fame.  He did get in on his first year of eligibility in 1982 when he was named on 97.83% of the ballots.  Quite frankly, I feel like the sportswriters who refused to name him on their ballots should have had their Hall Of Fame voting privileges revoked, because there is no valid excuse whatsoever to have not selected him.

When Aaron retired, he was the all-time home run king.  Many fans (myself included) argue that he is still the legitimate all-time home run king, as his achievements were earned, not accomplished as a result of steroid abuse.  Setting that aside, his career accomplishments tend to get overshadowed by the 755 home runs he smashed in his career.  Most of the fans I've spoken to over the years didn't realize that he was a member of the 3,000 hit club, let alone that he is the all-time hits leader for a right handed batter and the third most overall (behind only Ty Cobb and Pete Rose).  Here's a short list of Aaron's other achievements: