A Win Is A Win 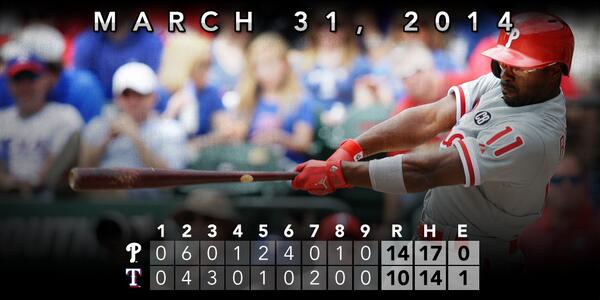 Opening Day 2014
Philadelphia Phillies @ Texas Rangers
That was an interesting start to the season.  Ryan Howard and Carlos Ruiz walked in the top of the 2nd and Code Asche doubled with two outs to put the Phillies on the board.  Tony Gwynn Jr came up to bat next and drew a walk to load the bases, followed by a Ben Revere RBI single to put the Phillies up 2-0.  This brought Jimmy Rollins to the plate who hit a grand slam to give the Phillies what should have been a comfortable 6-0 lead for Cliff Lee to cruise to an easy victory.
Well, Cliff Lee did get the win, but it was anything but an easy cruise.  He got knocked around by his former team, giving up 8 earned runs on 11 hits and just one strikeout in five innings of work.  The slugfest continued for both teams, but the Phillies came out on top, scoring 14 runs on 17 hits to defeat the Rangers 14-10.
Unfortunately, one player that I had been rooting for this Spring did not make the flight to Arlington with the team.

Bobby Abreu didn't make the Phillies 40 man roster out of Spring Training.  He was pretty solid at the plate, batting .244 with a .404 OBP, but he was pretty terrible in the field and the team was looking for more defensive versatility off of the bench.  He signed a minor league deal with the New York Mets today, so my dream of seeing him close out his career in Philadelphia is officially dead in the water.

Oh well... at least he was in a Phillies uniform long enough to be included in this year's postcard team set, and we got the win on Opening Day.  It was bowling shoe ugly, but hey, a win is a win.